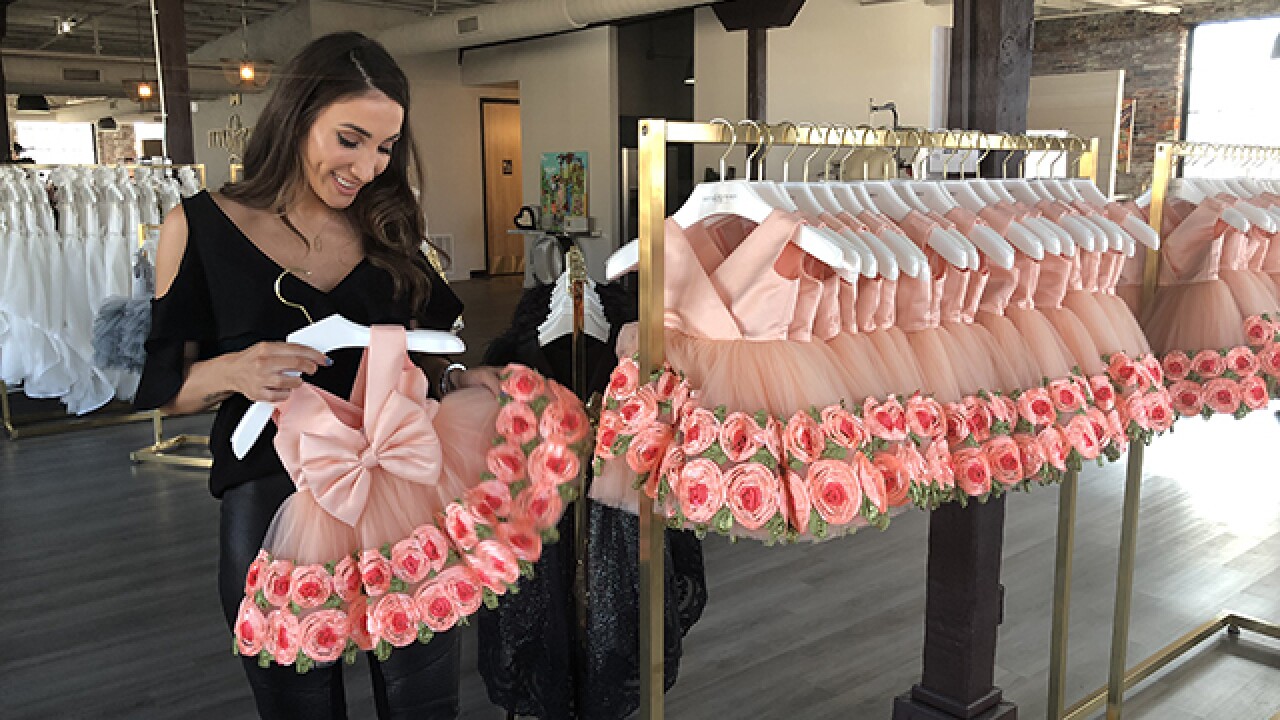 Copyright 2018 Scripps Media, Inc. All rights reserved. This material may not be published, broadcast, rewritten, or redistributed.
<p>Egreis Gjergjani runs an international online boutique called Itty Bitty Toes. She’s part of a wave of women known as “mompreneurs” who are finding success in starting their own businesses.</p>

KANSAS CITY, Mo. — A new wave of women known as “mompreneurs” are finding success in starting their own businesses.

Kim Taylor, a working mother of three in Kansas City, recently picked up a friend’s baby and secured the sides of her sweater. She says her patent-pending invention, The Mommy Wrap, isn’t 100 percent hands-free but gives her the freedom to be mobile and keep her babies with colic comfortable.

“You have to keep your baby upright at all times,” she said. “It does free up your hands where you can have your baby tucked in and do things around the kitchen, pick up toys around the house."

The wrap "is a fisherman's jacket for moms," she said with a laugh, pointing to a back pocket for a phone and a hook to secure a pacifier.

The idea for The Mommy Wrap came to Taylor while she was on maternity leave.

“I just wanted to come up with all of these solutions to make life easier,” she said.

Her mother sewed the first one from a drawing she made. Taylor trademarked “The Mommy Wrap” name, and after seeing how much some of her friends used it, she worked to have it manufactured.

But her early success also made it tough, she said.

“We sold out in two weeks,” she said. “Then we couldn’t find another manufacturer after that.”

Taylor works on The Mommy Wrap at night, after working at her full-time job at a global shipping and logistics company. That’s where she met another “mompreneur.”

“We’ve shipped to 196 countries so far,” she said while giving a tour of her Kansas City showroom and office. “This is headquarters, yes, so typically we make everything in Europe.”

Itty Bitty Toes, which has more than 33,000 customers, sells high-end, handmade children’s clothes. Social media is a big part of the business. The company’s Instagram account boasts more than 600,000 followers.

Gjergjani loved the idea of dressing up a little girl, but ironically, she started Itty Bitty Toes while she was pregnant with a baby boy.

“I can still get the joy out of having a daughter by dressing other kids, right? Other little girls?” she said. “I wanted something very high-end. I wanted handmade, and then the biggest thing that I wanted Itty Bitty Toes to provide that wasn’t available was ready-to-ship."

Since starting her business, Gjergjani has had her own baby girl, who now often models the boutique’s dresses and clothes.

Both Taylor and Gjergjani are part of a new wave of women starting their own businesses.

Between 2007 and 2018, the number of women-owned businesses grew by 58 percent, according to the 2018 State of Women-Owned Businesses report. Four out of 10 U.S. businesses are now owned by women.

“It was just a lot of talking to people and learning,” she said. “I’m still doing it.”

Gjergjani, who is expanding her business to include a women’s clothing line as well, said she has come a long way from where she started.

“Honestly, its surreal more than anything because I started it in the basement of my house,” she said of Itty Bitty Toes’ success.

Taylor said The Mommy Wrap will soon be on Amazon. She’s proud of the success she’s found since conquering her biggest hurdle.

“Just doubting myself, asking ‘what if this fails?’” she said of that little nagging internal voice she learned to silence. “What if it fails, so what? I still have my family!”