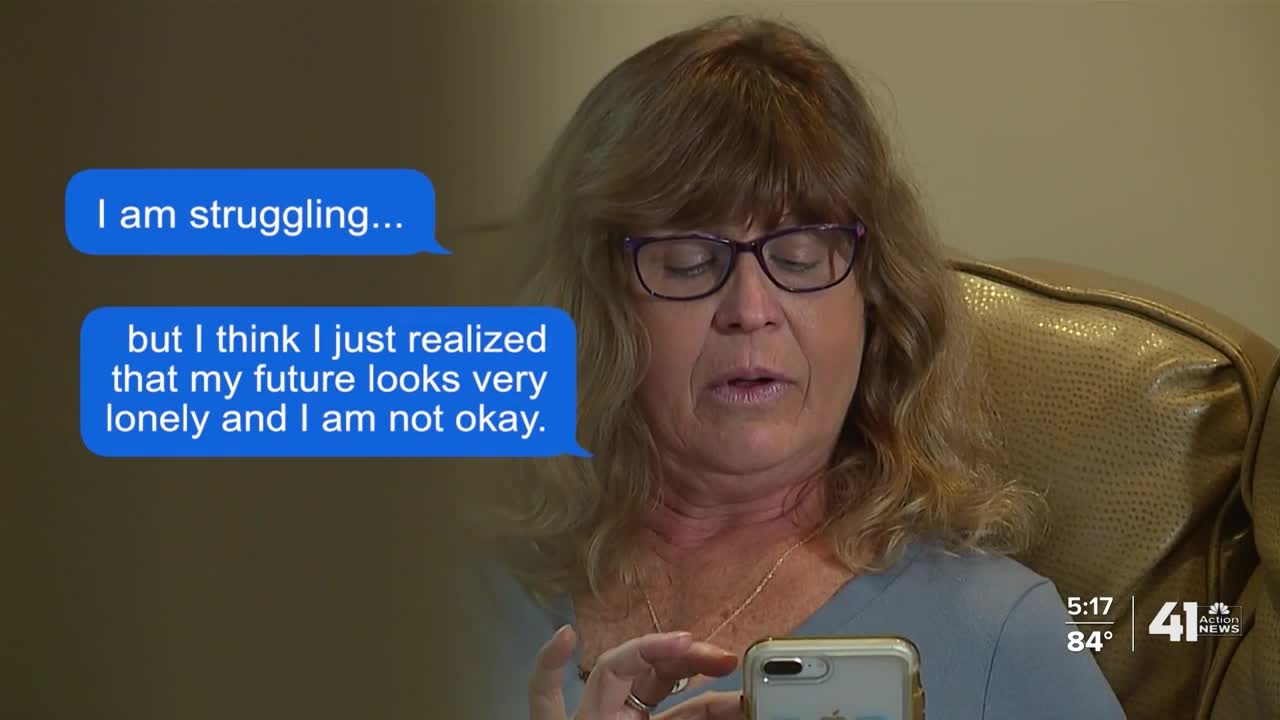 A group of women throughout the metro have found solace in a group text as they all have one thing in common: losing a child to suicide. KANSAS CITY, Mo. — A group of women throughout Kansas City have found solace in a group text as they all have one thing in common: losing a child to suicide.

One of those moms is Jennifer Padgett, who now has to use her memories to remember her son Luke.

“He loved sports," Padgett said. "I'd say basketball was probably his favorite."

But her caring, tractor-loving son was battling a war inside his head; a war he didn’t share with others.

Padgett called those weeks after her son's death dark and lonely. With the help of her sister, she found help.

"When you have a group of moms, when they understand you when you say I just want to lay down next to my child, that's all I want to do," Padgett said. "They get it."

She connected with a group text called Moms Stand Together.

"It started that fall of 2017," Sylvia Harrell said. Harrell helped form the group after she too lost her son Chad to suicide.

She found hope and comfort from other moms who understood her grief, because it was theirs too.

The group has now grown.

"What started as six moms in July 2017 is now at 33 moms," Harrell said. “We have added three moms in just a matter of weeks. They have all lost their children during the pandemic or shortly before the pandemic. So, just in the last six to seven months, they have lost their kids. Those are moms who have joined our thread, not the other moms we have even heard about.”

The worries have grown, too. Now, they said with COVID-19, it's as if the world understands how they feel.

"Our whole world is different than it used to be. So now kind of the whole world feeling like we feel, which makes it like okay. It's still very different but it's kind of made it like now I feel bad for the outside world to be in this moment," Harrell said.

Doctors at Children's Mercy Hospital said they always see an increase in teens with suicidal thoughts in the fall. Now there is a new threat: school during a pandemic.

The hospital confirms they have seen kids as young as 10 years-old with suicidal thoughts.

"When you have social isolation and you don't have connection to your regular groups, that can have a detrimental impact on young people," Dr. Shayla Sullivant, Child and Adolescent Psychiatrist at Children's Mercy Hospital said.

For these local moms, the connection afforded by the group chat can be a lifeline.

The following quotes are taken from the group text exchange:

"I am struggling. But, I think I just realized that my future looks very lonely and I am not okay," one mom said.

"I am so sorry. We are here, so glad you feel safe to dump your heavy. Sending extra love," another mom said.

There's one text that Padgett sends often to the group.

"I always say it in the group that I just know that they have all found each other and to believe that all of our children are together greeting one another saying my mom knows your mom," Padgett said.

While they were once strangers, a simple text now holds them together.

This mom's group is looking for a new way to communicate through an app. Harrell said they currently use GroupMe, but that they are looking for an easier way to talk and looking for a way to try to have sub-groups within an app.