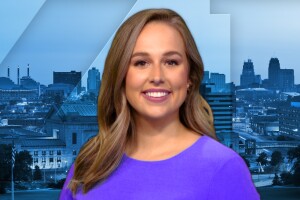 Jordan Betts started her career at KSHB in July 2018.

She went to the University of Arkansas where she majored in Broadcast Journalism. She's living her dream and has wanted to work in television since she was a kid.

Jordan came to KC after spending lots of time in Wisconsin! First at WAOW in Wausau as a forecaster/reporter, then at WBAY in Green Bay as a reporter/web-producer/traffic anchor. Jordan claims to have eaten lots of cheese during her time up north!

She loves putting a smile on someone's face and is most proud when she spends a long day reporting and when someone sits down to watch the news, they can be informed and educated or maybe find something to chuckle about.

As a foodie, she is excited to see what KC has to offer. She's getting lots of great suggestions because she learned everyone here is friendly and she's looking forward to becoming part of the community.

Besides food, she loves tennis and spending time in the sun working on her backhand. You can also find her at the movies or watching her all-time favorites: "It's Complicated", "Love Actually", "Star Wars: The Empire Strikes Back", "Three Billboards Outside Ebbing, Missouri" and "Sweet Home Alabama".

She keeps up on shows like "Will & Grace", "This is Us", "Game of Thrones", and "The Handmaid's Tale" and listens to every type of music. She especially loves jazz, so she's come to the right town!