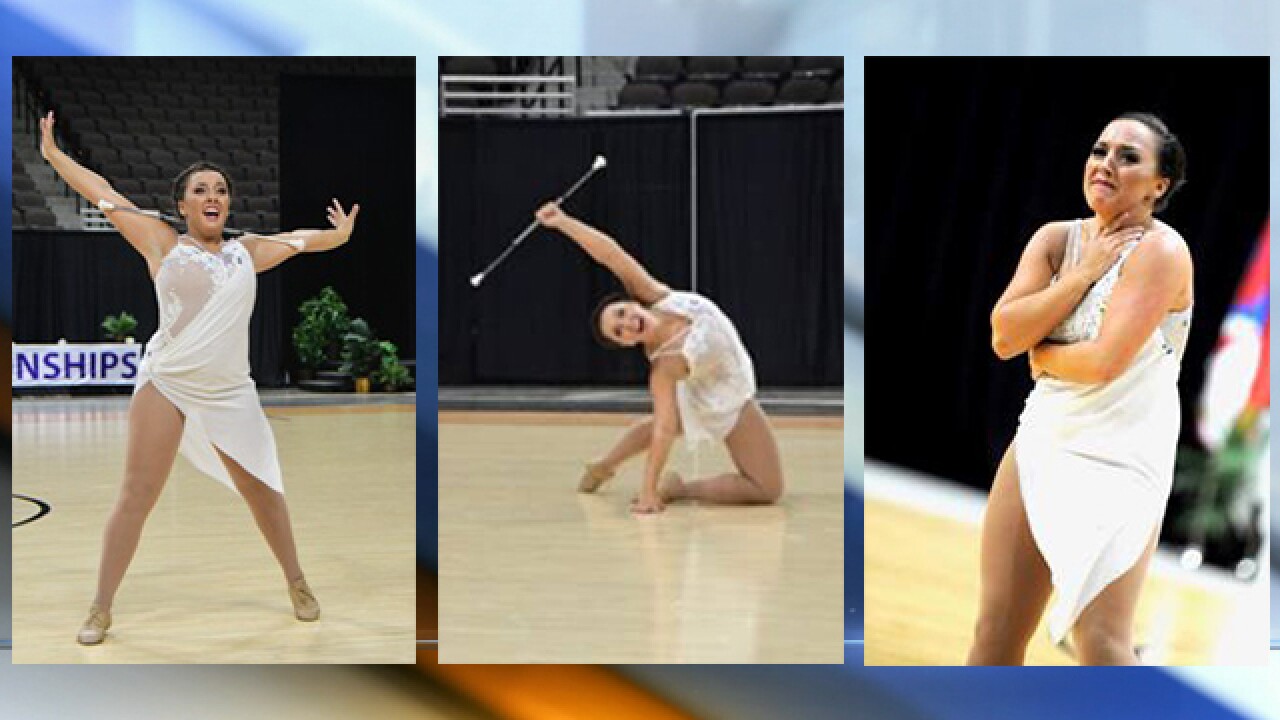 Copyright 2018 Scripps Media, Inc. All rights reserved. This material may not be published, broadcast, rewritten, or redistributed.
<p>Kansas City resident and University of Arkansas feature twirler Savannah Miller earned the silver medal, two standing ovations and the admiration of twirling fans around the globe with her breathtaking performances at the 34th World Baton Twirling Championships, held August 2-5 at the Silver Spurs Arena in Kissimmee, Florida. Photos submitted.</p>

KANSAS CITY, Mo. — For Kansas City native Savannah Miller, it’s been a busy few weeks – getting back from teaching in Europe and getting ready for her senior year at the University of Arkansas.

Miller took home a silver medal in the senior women’s freestyle event, her highest finish in this style of twirling which includes gymnastics.

She’s not a stranger to the medal platform though, as she’s won multiple national and international titles in a form of twirling that doesn't involve gymnastics.

“This is kind of a new challenge for me,” Miller said in a SKYPE interview. “It’s something to really push me and grow as a twirler.”

Miller has grown-up with a baton in her hand.

She started twirling at a Kansas City, Missouri dance studio when she was three and started performing at a national level just a year later.

When Miller was 9 years old, she took her performances to the world’s stage.

Many Kansas City residents might have seen Miller before, as she’s performed at Kansas City Royals games, Kansas City Brigade games and during her high school career at St. Thomas Aquinas in Overland Park.

In order to compete in this month’s World Baton Twirling Championships, Miller first had to qualify, which she did back in March.

But she and her coaches quickly realized her qualifying routine wasn’t going to be good enough to compete at the next level.

“We made a huge decision and decided to take a risk,” she said. “We wanted to show a completely different side of me.”

Miller and her team set to work to find a new song and routine.

Eventually, they stumbled upon a version of “Amazing Grace” by Leann Rimes on YouTube one afternoon and decided that was music, but that was the easy part.

Balancing an 18-hour college class schedule, Miller took to the gym to perfect the routine, sometimes arriving at 4 a.m. to have time to practice before class.

“I don’t think I saw anybody but my baton and the people at the gym,” Miller said of the long days at the gym. “It’s a lot more intense than people think it is.”

The work paid off, but it wasn’t until July that everything came together.

Miller’s toughest trick in the routine was something called quad illusion, and it was the first big trick of her routine. In the trick, Miller tossed the baton in the air – more than 40 feet high – and before it came back down, she had to do four illusions and catch the baton before it hit the ground.

It’s a new trick not only for Miller but also for the sport.

Miller first pulled off the trick only a couple weeks before the championship.

“That trick was really nerve-wracking for me,” she said, adding that some of the gyms she’d practice in weren’t even high enough for the toss.

Two weeks after her silver medal performance, video her routine on Facebook has been watched more than 3 million times.

As for what’s next, Miller doesn’t rule out returning to the next World Championships to try for a gold medal, but in the meantime, she’s planning a six-month study-abroad program in Rome and graduating from Arkansas where she’s studying broadcast journalism.

And she wants to remain active as dance and baton twirling coach and choreographer.