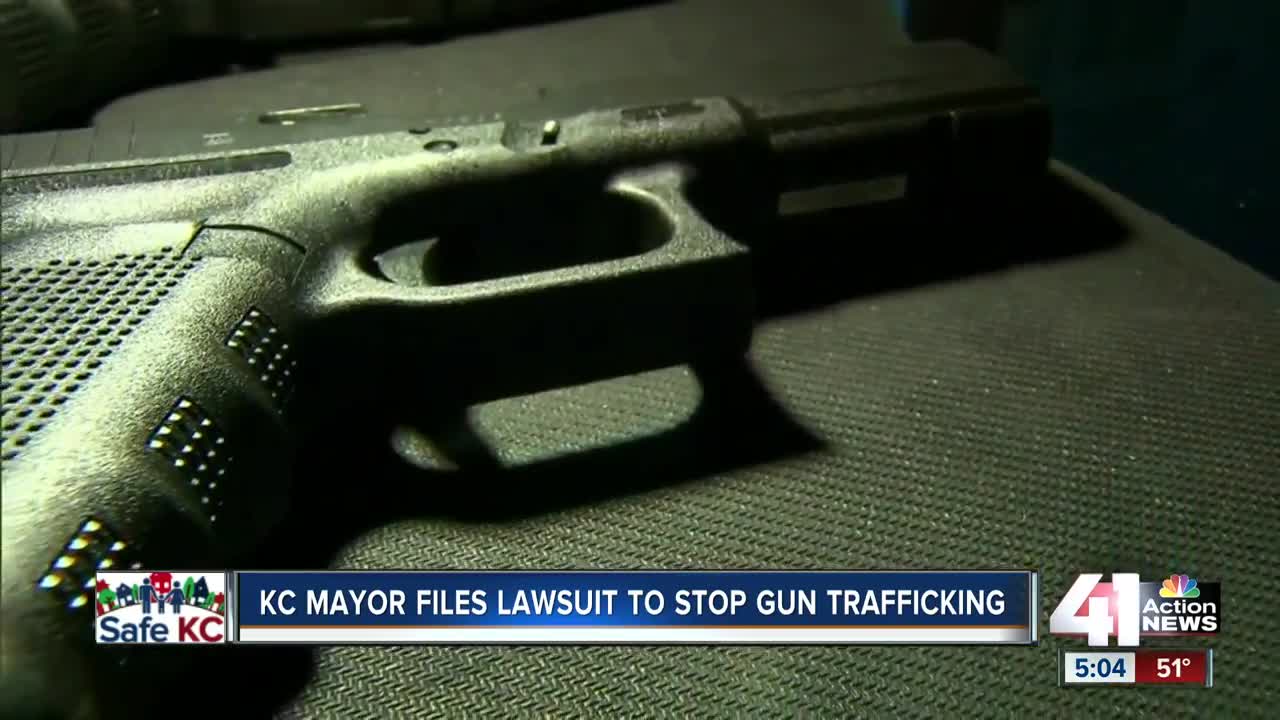 Kansas City, Missouri, has filed a public nuisance lawsuit against a Nevada gun manufacturer and multiple firearms dealers in the Kansas City area in connection with a federal gun-trafficking case. 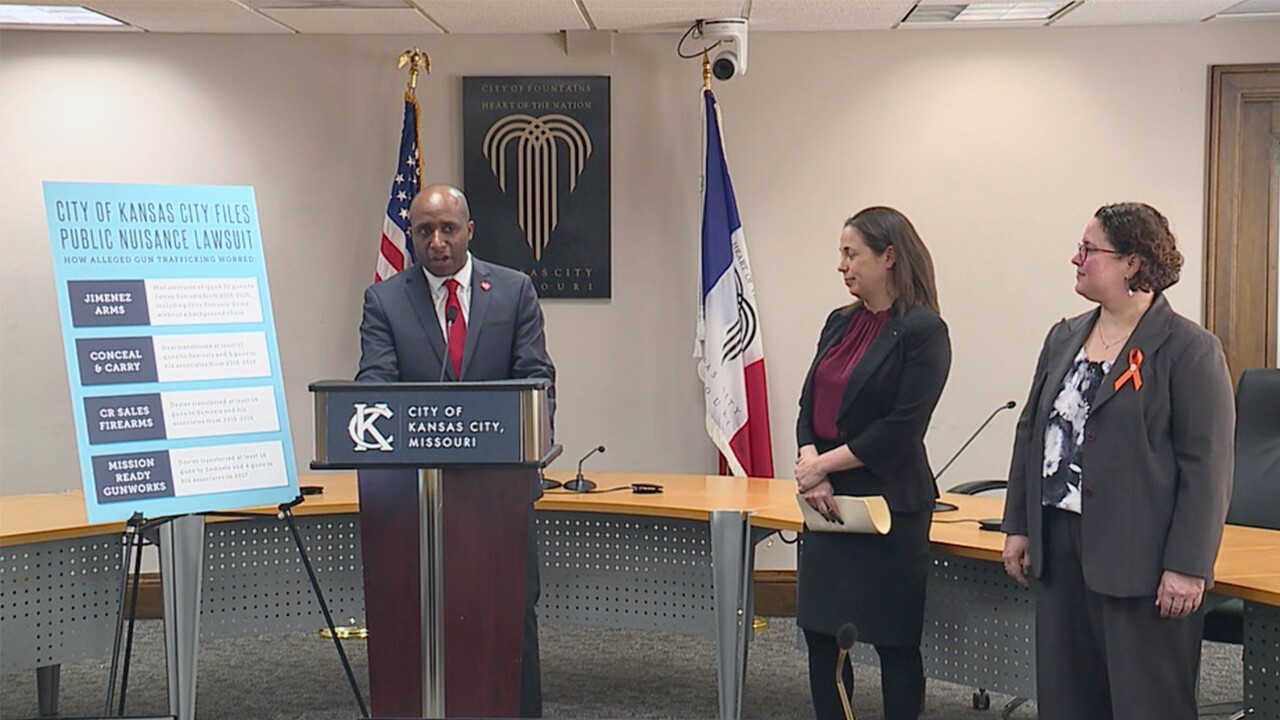 KANSAS CITY, Mo. — Kansas City, Missouri, has filed a public nuisance lawsuit against a Nevada gun manufacturer and multiple firearms dealers in the Kansas City area in connection with a federal gun-trafficking case.

“The headline is important, because a city is filing suit against a gun manufacturer for the first time in 10 years,” Mayor Quinton Lucas said in announcing the lawsuit.

Lucas made the announcement at an 11 a.m. press conference with Assistant City Attorney Tara Kelly and Director of Affirmative Litigation at Everytown Law Alla Lefkowitz.

Everytown Law will assist the city and a local firm with the lawsuit, which centers around alleged illegal gun sales by former Kansas City Fire Department Capt. James Samuels.

Samuels was arrested in October 2018 and charged with a range of federal gun trafficking charges, including at least one firearm that was used in the commission of a homicide.

According to federal prosecutors, Samuels purchased 77 firearms between November 2013 and October 2018, including 57 Jimenez Arms pistols, of which at least 47 were transferred to third parties in violation of federal law.

Samuels was charged with six counts of selling firearms and ammunition to a prohibited person and three counts of transferring a firearm used in a violent crime, according to a federal indictment.

He also was charged with conspiracy to make false statements during the purchase of a firearm, dealing firearms without a license, possession of a stolen firearm and two counts of possession of an unregistered firearm.

“Today’s definitive action by the City of Kansas City and Everytown Law signals that our community will not look the other way when it comes to illegal gun trafficking,” Lucas said in a statement. “As we continue working to end the violent crime epidemic in Kansas City, identifying and prosecuting those who illegally obtain or provide guns to those should not have them, as defined by law, will remain part of the solution.”

The city contends in its lawsuit that the gun suppliers and straw buyers, people who act as intermediaries to illegally buy guns on behalf of other individuals, are part of a gun-trafficking conspiracy.

The lawsuit contends that “companies who were willing to look the other way in the face of clear evidence of gun trafficking” are a significant actor in the trafficking of illegal firearms, Lefkowitz said.

The lawsuit specifically names Jimenez Arms and CR Sales Firearms LLC of Independence along with Herb W. Butzbach III, operating as Mission Ready Gunworks in North Kansas City, and Suzette Nelson, who used to operate Conceal and Carry in KCMO, in addition to Samuels.

Iesha Boles is also named for her role as an alleged straw-purchase accomplice. She pleaded guilty in May 2019 in federal court for her role in the gun-trafficking ring and is awaiting sentencing.

According to the city, their collective complicity contributed “to the violent crime epidemic in Kansas City,” according to a statement from the city, which “seeks reimbursement for the costs of dealing with violent crime traceable to the trafficking ring, and seeks an order requiring the defendants to recover firearms that are still in circulation,” the city said in a release.

According to the city, Jimenez Arms guns “have been frequently and disproportionately recovered at crime scenes in the Kansas City region,” including at many of the additional 480 non-fatal shootings last year in the city.

According to court documents, KCPD "recovered, seized, or held as evidence at least 166 Jimenez Arms guns" from 2014-18 as part of its investigations.

Under federal law, it is illegal to sell firearms without a federal firearms license, to ship firearms across state lines without a license or to lie on federal forms when purchasing weapons, which is the case in straw purchases.

Gun companies are trained to spot such illegal activity, including bulk and repeat purchases.

“Gun dealers and manufacturers have a legal responsibility not to ignore suspicious purchasing behaviors that indicate illegal gun trafficking or straw purchasing,” Lefkowitz said. “This lawsuit should send a clear message to companies that choose to profit off illegal gun sales: you will be held accountable.”

“By permitting these gun sales to take place, these companies endangered the entire city of Kansas City,” Lefkowitz said.

Court records indicate Jimenez sold Samuels 32 guns from 2013-15 guns, including 11 that were shipped to his home without a background check, at approximately $115. After being allowed to buy at wholesale prices, Samuels would illegally resell the firearms for $200-300.

Lucas said the decision to file suit was made in conjunction with the KCMO City Council and filed in Jackson County Circuit Court.

Everytown Law is the legal offspring of the Everytown for Gun Safety Support Fund, which was formed in 2013 after Mayors Against Illegal Guns and Moms Demand Action for Gun Sense in America joined forces as a counterbalance to the National Rifle Association’s political influence.

“Over the past several years, Kansas City has experienced one of the highest homicide-per-capita rates in the United States,” the city said in a release. “In 2019, a firearm was involved in 95 percent of homicides, and handguns were the firearm most frequently used.”

Lucas, who became KCMO's 55th mayor on Aug. 1, 2019, has made combating violence the top priority of his administration.

Kansas City has averaged 142 homicides during the last four years, including 148 in 2019.

Latriece Murray, outreach specialist for KC Mothers in Charge, said she believes the lawsuit is a step in the right direction.

"I think it should have a great impact on the community," she said. "Some people will see some action and that might get people going. We need to come together as a community because it's not just one person's problem."