Opponents say it will hurt patients 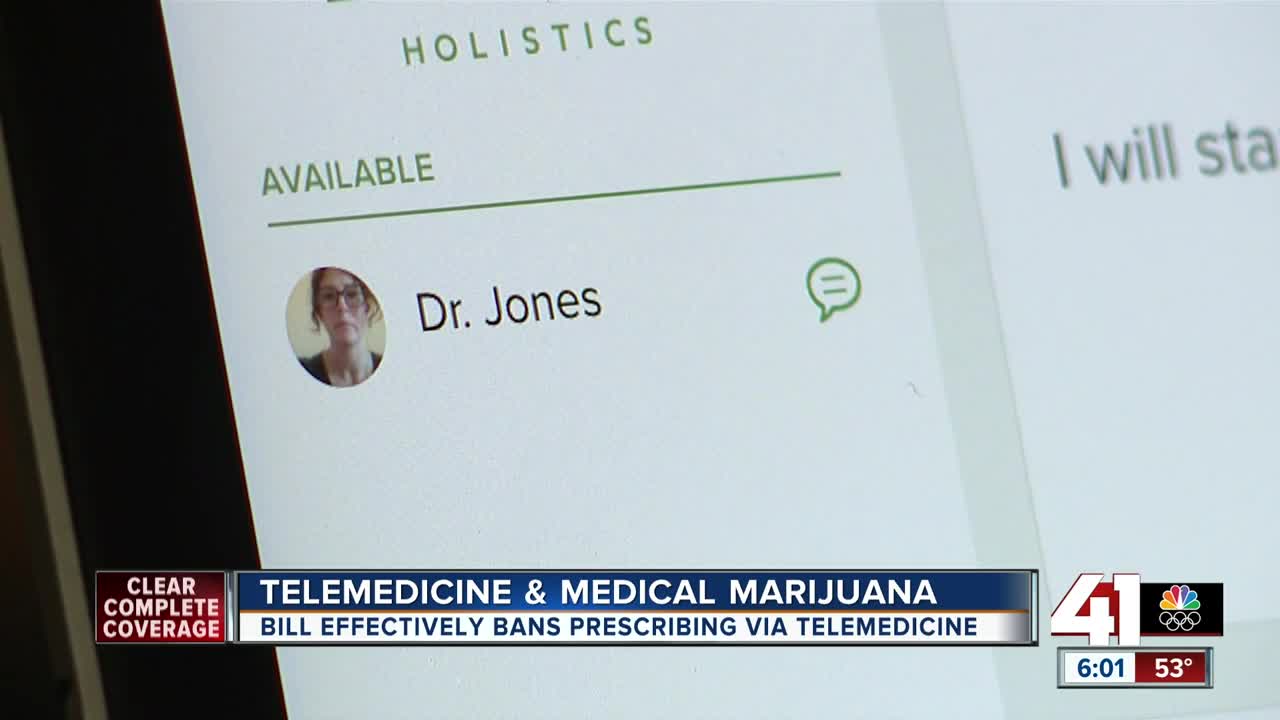 A Lee's Summit doctor and state representative wants to effectively ban medical marijuana telemedicine, where a patient can see a doctor via video. Rep. Dr. Jon Patterson, a Republican, introduced a piece of legislation attached to Missouri House Bill 1896, which would require anyone who wants to get a medical marijuana card to see a physician in person. 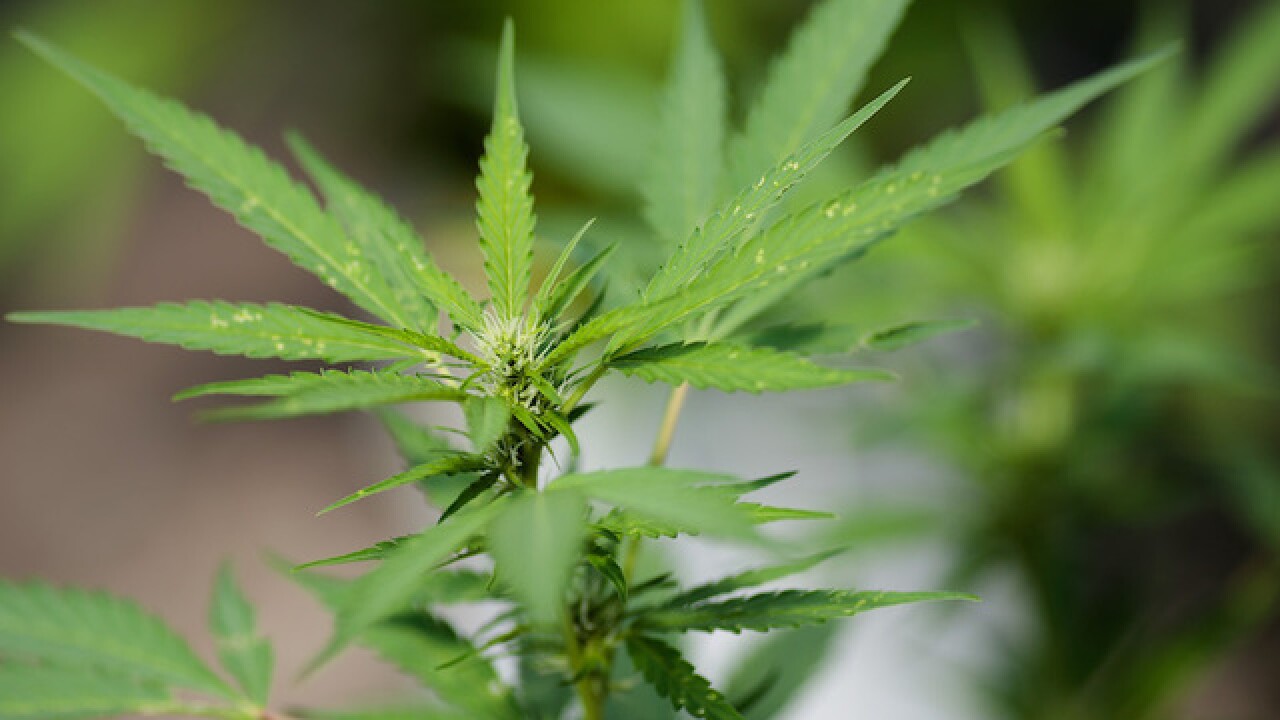 KANSAS CITY, Mo. — A Lee's Summit doctor and state representative wants to effectively ban medical marijuana telemedicine, where a patient can see a doctor via video.

Rep. Dr. Jon Patterson, a Republican, introduced a piece of legislation attached to Missouri House Bill 1896, which would require anyone who wants to get a medical marijuana card to see a physician in person.

Many clinics in Missouri use telemedicine to certify medical marijuana patients. Currently, a patient can see and talk with a physician using their phone or laptop, similar to Skype or FaceTime.

"I utilize telemedicine whenever possible because it allows me to go to the doctor without having to leave the house," Missouri resident Jeff Pickman said Friday.

Pickman has postural orthostatic tachycardia syndrome (POTS) and CSF hypovolemia, both severely debilitating diseases that prevent him from being able to stand for even short periods of time. Small tasks such as getting out of bed, taking a shower and getting ready to leave the house can make him feel sick the entire day.

"I don't know how I'm going to feel any given morning, so I have to cancel my doctor's appointments all the time because I'm not feeling well," Pickman said.

Patterson was not available for an interview on Friday but provided 41 Action News with the following statement:

Opponents of the bill say it would severely limit disabled, rural and elderly patients from being able to get their medicine.

"I think this bill will eviscerate rural patient access to medical marijuana, which was the exact opposite intent of what Amendment 2 and Missouri voters voted to pass," said Chris Wolfenbarger, a veteran and cannabis activist.

Wolfenbarger works with veterans, many of whom don't have a primary care doctor, and says telemedicine to gain a medical marijuana card has helped them with depression and other disorders. He also says rural communities and farmers without regular access to mental health resources could greatly benefit from cannabis.

"We are a rural state," said Russell Colby with Elevate Holistics. "A lot of these towns have no major hospitals in them; they have very limited doctors offices."

Elevate Holistics is an online doctor's office that works with cannabis care physicians with the rural, disabled, and elderly communities in mind.

Physicians must be licensed in Missouri to work with patients in the state.

Dr. Gillian Jones, a neurologist and cannabis care physician, is part of the Elevate Holistics network. She's based out-of-state in Texas — which is what Patterson wants to avoid — but she's licensed in MIssouri.

"I went to medical school. I went to residency," Jones said. "I did the same exact training and I carry the same quality of care into this practice as I would into neurology."

The Missouri Department of Health and Senior Services says a physician can certify patients through telemedicine if the standard of care does not require an in-person visit and if the physician can truthfully check off all the boxes needed to certify a patient.

Several states have banned marijuana telemedicine, such as Colorado, Arkansas, Illinois, Washington and Florida. Other states allow it, including California, New York, Oklahoma and Nevada.

Opponents also say the proposed bill goes against Amendment 2, which legalized medical marijuana in Missouri. The amendment says legislators can't make any laws that will make it harder for patients to access medical marijuana.

On Friday, NORML KC, a local organization that works “to end cannabis prohibition in Missouri,” said it does not support the bill with the amendment to remove the telemedicine option.

Read the full statement from NORML KC below:

NORML KC does not support HB 1896 with the added amendment by Rep. Patterson which would remove the option of telehealth visits for patients seeking medical marijuana certification. We believe this is unconstitutional because it creates an undue burden on patients accessing the medical marijuana program. Article XIV explicitly prohibits the legislator or DHSS from enacting any laws that would cause an undue burden on patients.

Many of the patients who would benefit from the MMJ program are disabled and homebound. Removing the option of telehealth appointments would completely cut off access to these patients and that is unacceptable. Telehealth visits are legal in Missouri for patients seeking other forms of regular care, and there is no reason why medical marijuana patients should have to jump through extra hoops compared to the rest of the population.

We would also like to express support for Rep. Wiley Price’s decision to sponsor NORML KC’s patient parental protections language (HB 2715) and also for sponsoring employee protections for medical marijuana patients (HB 2674). Our legislators are sworn to uphold the Missouri Constitution and, like Rep. Price, should be creating and voting in support of laws that strengthen our program, not tear it apart.

The House made several adjustments to House Bill 1896 on Wednesday, but it has yet to go to the Senate.

This piece of legislation is part of the same bill that would require all employees in the medical marijuana field to submit fingerprints to be used in a criminal background check.

As of Feb. 28, DHSS had received 38,819 patient applications. Of those, 35,532 patients, caregivers and patient/caregiver cultivators had been approved.