KCPD: Tuesday was 'best night so far' for protests 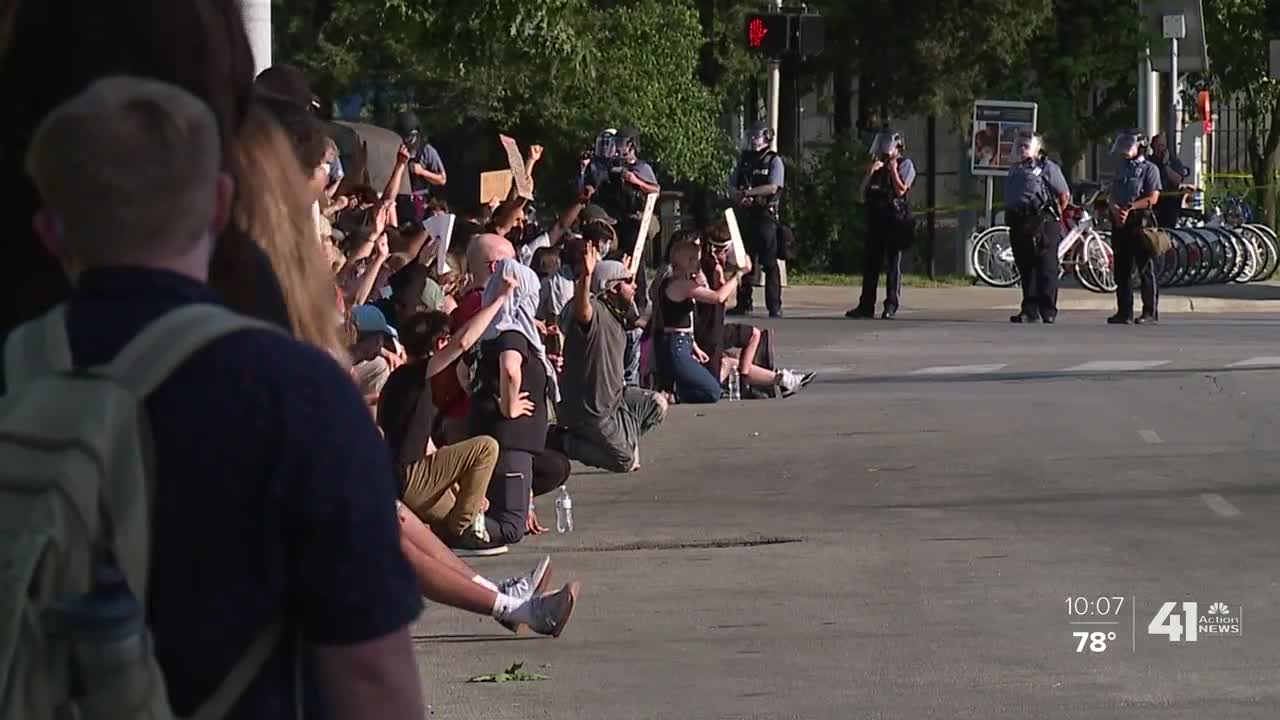 Protesters took to the Country Club Plaza in Kansas City, Missouri, for the fifth night in a row in response to the death of George Floyd. 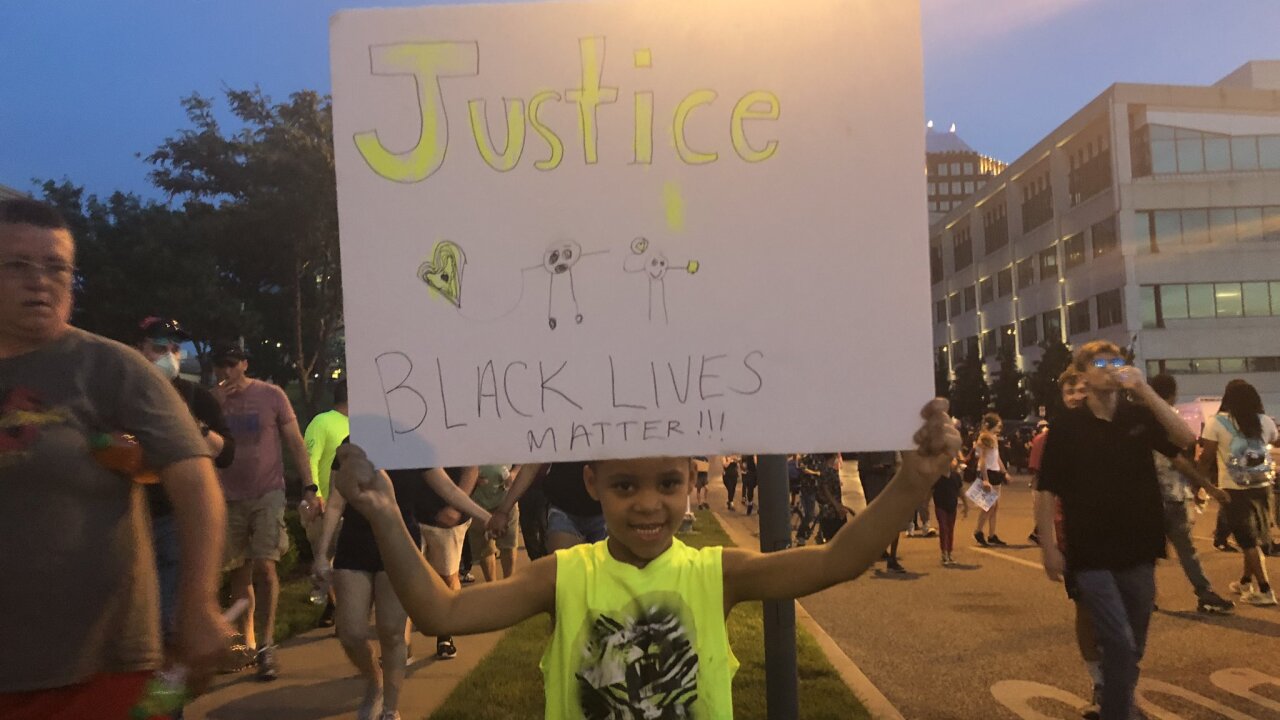 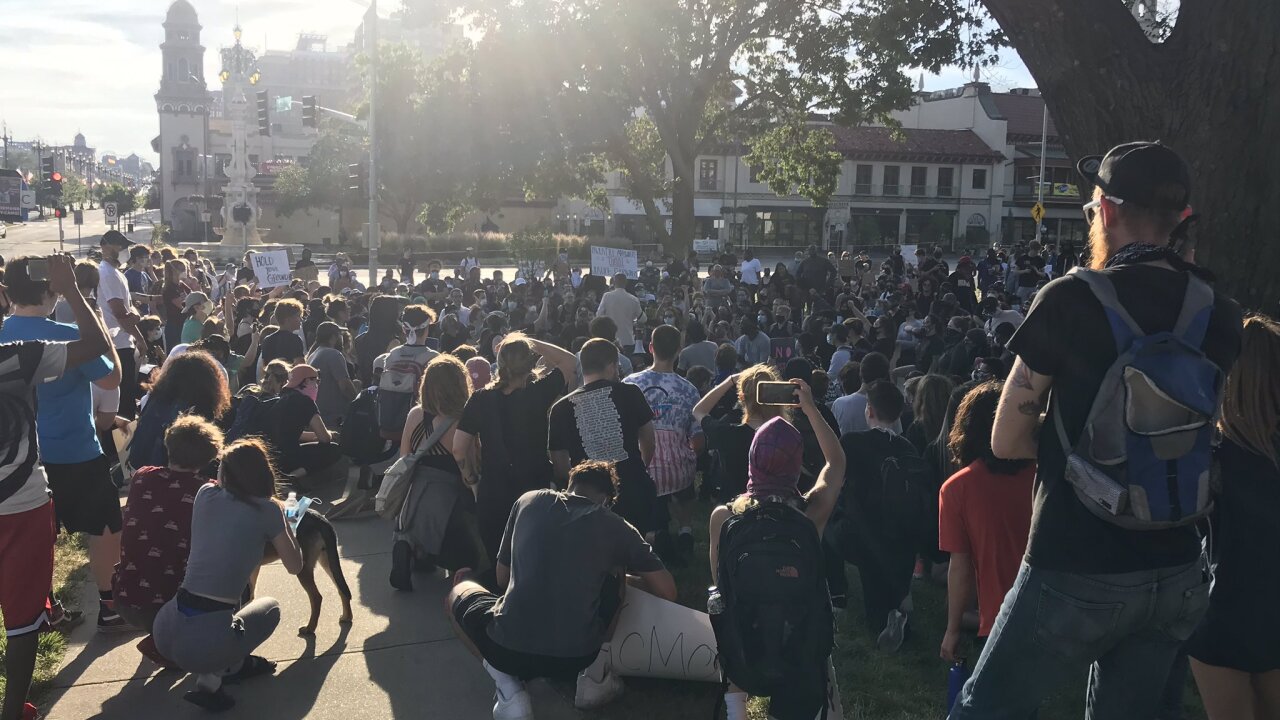 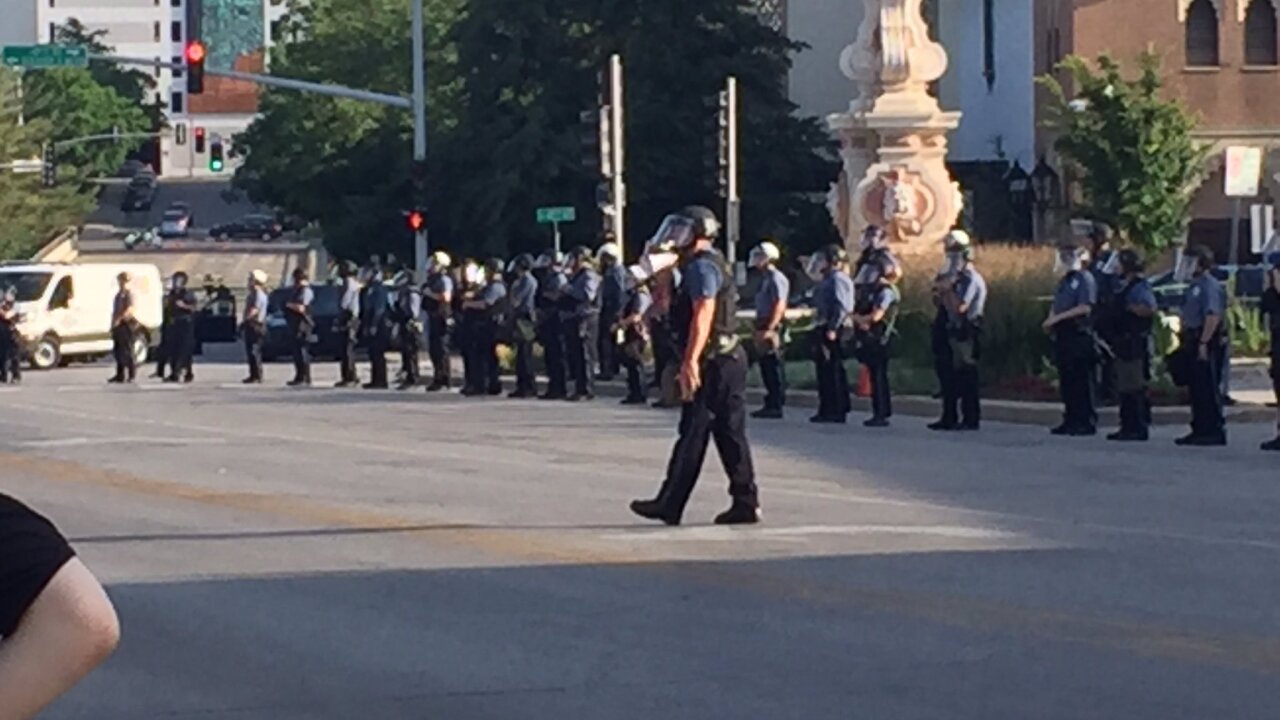 KANSAS CITY, Mo. — Protesters have gathered at Mill Creek Park in Kansas City, Missouri, for a fifth straight day of protests to demand action about police brutality in the wake of George Floyd's death last week at the hands of Minneapolis police.

11:04 p.m. | Kansas City, Missouri, police spokesman Sgt. Jake Becchina said this "has been the best night so far" in terms of police interaction with protesters. He said he hopes that "kindle of unity" can continue.

“This is the best night we’ve had,” Sgt. Jake Becchina, @kcpolice spokesperson said during the 11pm update on the #kcprotests #GeorgeFloydProtests @41actionnews pic.twitter.com/IEhOVoBJ8k

Becchina said the two "mini marches" up Main Street went well, even with some demonstrations that spilled into the northbound lanes of the street.

Approximately 15 to 20 people have been arrested and Becchina said "a couple deployments" of pepper spray were used during some arrests, but there have been no instances of tear gas being used on Tuesday night.

10:03 p.m. | KCPD spokesman Sgt. Jake Becchina said "it's been largely peaceful" and officers have kept more distance with protesters tonight, which he credits for helping keeping things from getting tense.

He calls it things so far tonight "successful," and says KCPD is "excited about the progress me made here tonight" and had high hopes for the Unity March at 6:30 p.m. on Wednesday from the Nelson-Atkins Museum to Mill Creek Park.

Becchina also credited the "clergy and pastors" in the community, who helped lead today's protest marches, for keeping things relatively calm. He noted there have been fewer than 10 arrests tonight compared with "30 to 40" last night and more than 150 over the weekend.

9:38 p.m. | Mayor Quinton Lucas is calling for an emergency meeting of the Kansas City Board of Police Commissioners because "thought it essential we discuss pressing issues earlier than mid-June."

The next scheduled meeting was set for June 16, which is in two weeks. There have been five straight nights of Black Lives Matter protests near the Country Club Plaza to raise awareness of police brutality toward toward African American people.

Lucas also said he has asked the regional FBI office and U.S. Attorney's Office to review "any and all incidents of potentially violative procedures or misconduct" related to these protests.

Over the past several days, I’ve spoken to some of my fellow police commissioners, leadership in the police department, and other relevant authorities concerning the protests and use of force well before this point.

9:18 p.m. | The young man wants you to know and embrace that his life matters during the fifth consecutive day of Black Lives Matter protests in Kansas City, Missouri.

Protestors want to be heard and they are having conversations with @KCKPDHQ. @arothfield has the story tonight at 10pm on @41actionnews pic.twitter.com/29CieErlPN

He said he "doesn't believe" officers have deployed tear gas tonight, which is something "we have been called out for."

Becchina said officers "are being flexible" as the group of protesters, which is too large to stay on the sidewalk, stray into the northbound lanes of Main Street.

8:52 p.m. | Several hundred protesters are on the move again up Main Street.

8:49 p.m. | Missouri House Democrats issued a statement "condemning the killing of George Floyd," but also calling for an end to "destructive acts" that have accompanied some protests.

The Missouri House Democratic Caucus stands with the Missouri Legislative Black Caucus in condemning the killing of George Floyd by the Minneapolis Police Department. The list of senseless deaths – including our own Missouri native Michael Brown, and most recently George Floyd, Breonna Taylor, Ahmed Aubrey and so many more – is far too many for any of us to not recognize and take action against the systematic and institutional problems our country is facing.

All over the state we’ve seen a phenomenal outpouring of people expressing their outrage and desire for change. But now we’ve also seen a few individuals abusing these protests as opportunities for violence, leading to the overnight killing of a former police captain and four other officers shot, along with homes and businesses targeted. Our caucus supports and empathizes with protest in all forms, but these destructive acts and resulting deaths cannot continue. Our hearts go out to all those hurting and suffering in this time.

House Democrats are committed to listening to our communities and working on legislation to reform our justice system and address the root causes of racism and disparities in all of our institutions and society.

8:39 p.m. | During the march along Main Street, some protesters also laid face down in the street, chanting George Floyd's name and "no justice, no peace."

Several hundred protestors peacefully walk along S. Main. Dozens stop to lay on pavement with hands behind their back chanting “George Floyd - no justice, no peace.” ⁦@41actionnews⁩ #KansasCityprotest pic.twitter.com/UsZPlesZA5

8:22 p.m. | The group that marched along Main Street has returned to Mill Creek Park, where the crowd has grown along with the police presence.

The marchers are back at the fountain on J.C. Nichols rejoining the group still here. @41actionnews @kcpolice has added to their presence. pic.twitter.com/AotZAJJnq8

8:09 p.m. | During his update, KCPD spokesman Sgt. Jake Becchina said the Missouri National Guard in Kansas City have been protecting government buildings in the downtown area, but no guardsmen have participated in policing protest groups.

He also said 30 to 40 people were arrested during Monday's protest.

8:05 p.m. | Protesters stopped on Main Street and linked arms in the street as police watched without intervening.

Protesters linked arms in the middle of Main St, then pushed themselves back onto the sidewalk yelling “Get on the sidewalk, there’s kids” as police & sheriff formed a line opposite pic.twitter.com/P74yWvAlg5

8:02 p.m. | Kansas City, Missouri, police said police formed a line and approached protesters as it began to spill into the streets. "Four to five" protesters were arrested for refusing to return to and stay on the sidewalk.

Police have avoided using tear gas or other control measures.

He said that police will not allow any groups that attempt to block the highway, noting that some walking groups have made it to West 31st Street on different nights.

7:50 p.m. | At least two people were arrested as the protest near the Plaza briefly spilled into the street near Mill Creek Park.

Two people are taken into custody in the street after law enforcement got on a blow horn and said anyone not staying off the street will be arrested. The crowd began chanting, “let them go.” @41actionnews pic.twitter.com/dExMK1nb2n

7:47 p.m. | Not all of the protesters assembling Tuesday at Mill Creek Park marched to up Main Street.

While some of the protestors are on a march, many are still here. Now in the street, at times kneeling and chanting “kneel with us.” Law enforcement is trying to keep people off the streets and on the sidewalk or in the park. @41actionnews pic.twitter.com/ny87gic7C9

7:43 p.m. | After marching along Main Street for several blocks, some protesters are returning to the Plaza area.

7:33 p.m. | The man arrested on the streets of the Country Club Plaza over the weekend in a video that went viral and drew scorn on social media is addressing protesters in Kansas City, Kansas, tonight.

Tarence Maddox speaks at a protest in Wyandotte County just days after video showed police taking him to the ground at the Plaza in Kansas City, MO. @41actionnews pic.twitter.com/eoqyG9QDlL

There are two groups of protesters in KCK. This group is walking from the Wyandotte County Courthouse back to KCKPD Headquarters. ⁦@41actionnews⁩ pic.twitter.com/Zpl5s5akzU

7:20 p.m. | Police have asked protesters marching north on Main Street to remain on the sidewalk.

.@kcpolice have asked protesters to stay on the sidewalk as they march north on Main Street @41actionnews pic.twitter.com/2Ioz0mtn7a

7:10 p.m. | Police spokesman Sgt. Jake Becchina said the effort to deescalate and avoid conflicts like the last few nights, which involved tear gas and rock-throwing, prompted KCPD's decision not to have officers form a line tonight.

"We are evolving, just as this protest group is evolving," Becchina said.

He was encouraged that protesters engaged officers in a conversation about a plan to march north on Main Street, which was an encouraging sign of communication between police and civilians.

Becchina said 40 faith-based leaders gathered near the Country Club Plaza to pray for the safety of protesters and officers.

7:07 p.m. | An Oklahoma State linebacker, Amen Ogbongbemiga, announced that he has tested positive for COVID-19 despite taking precautions while attending a protest in Tulsa.

7:01 p.m. | Before the protests started in Kansas City, Kansas, protesters and police had a quick conversation.

6:35 p.m. | One of the changes in tactics being utilized Tuesday night is a less imposing image of police on the streets.

With protesters off the streets @kcpolice are reducing the number of officers on JC Nichols. Earlier today Chief Rick Smith said they were going to use deescalation techniques tonight. @41actionnews pic.twitter.com/Xy86fTCgLN

6:25 p.m. | Kansas City, Missouri, Police say they are trying different tactics in interacting with protesters who have gathered for five straight nights at Mill Creek Park.

Despite the different politics, police are still making arrests, including one man who was taken into custody around 6:15 p.m.

MOMENTS AGO: As protests continue at Mill Creek Park, Kansas City, Missouri Police made an arrest of one man. pic.twitter.com/oJJnKT0IWm