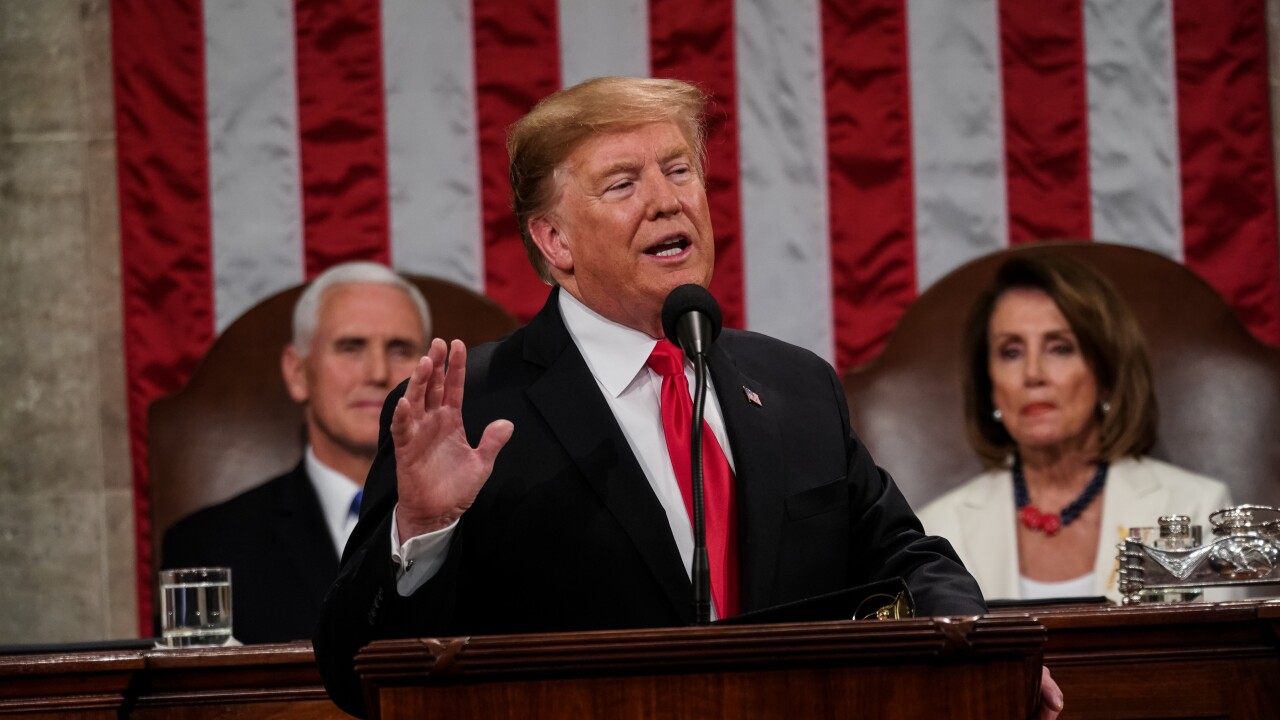 Pool/Getty Images
WASHINGTON, DC - FEBRUARY 5: U.S. President Donald Trump, with Speaker Nancy Pelosi and Vice President Mike Pence looking on, delivers the State of the Union address in the chamber of the U.S. House of Representatives at the U.S. Capitol Building on February 5, 2019 in Washington, DC. President Trump's second State of the Union address was postponed one week due to the partial government shutdown. (Photo by Doug Mills-Pool/Getty Images)

KANSAS CITY, Mo. — Local lawmakers are weighing in after President Trump delivered his annual State of the Union address Tuesday.

“During the State of the Union, President Trump shared an inspiring vision of American greatness and outlined a bipartisan agenda that can break decades of political stalemate. I was pleased to hear the President address our nation’s workforce demands and infrastructure needs, reaffirming his commitment to fighting for free and fairer trade deals for Missouri farmers and sharing a bold vision for rebuilding American infrastructure, much like the critical needs our state faces.”

“President Trump is a problem solver and offered a number of common sense, bipartisan solutions during his address. I will continue to work alongside the President to make America great again,” Governor Parson said.

“The State of the Union is a longstanding tradition that allows the President of the United States to lay out his or her agenda in front of Congress and the American people. Tonight, I was pleased to hear the president discuss several issues important to Kansans and sensible measures Congress can and should work together on to accomplish in the upcoming year.

“President Trump is right to focus on rebuilding our nation’s crumbling infrastructure – an issue that can garner broad support from Republicans and Democrats in both the House and Senate – which ought to include a plan to expand broadband in rural areas. I was also pleased to hear the president’s commitment to work with Congress to ratify the USMCA and expand trade for Kansas farmers and ranchers, expediently implement the VA MISSION Act to help provide our veterans with accessible healthcare, lower the rising cost of healthcare and prescription medication, and aggressively fight cancer and deadly diseases. Additionally, I share the president’s goal of better securing our borders and I was pleased he did not declare a national emergency at our border, instead opting to allow Congress to continue our work and negotiate a solution.

“Tonight, President Trump’s message regarding his hope for bipartisan policy achievements was an important step in the right direction, and I am committed to working with my colleagues and the administration on delivering positive results for Kansans and for the American people.”

“The President made it clear tonight that America is great because of the pro-growth policies we’ve implemented. Job creation is up, unemployment is at its lowest in nearly 50 years and Americans are seeing more money in their pockets. However, it’s clear that we need to work together to make our country even greater.

Our immigration system must be strengthened to make sure our nation is safe and secure. Securing the border and ensuring that the law is being followed has historically received bipartisan support. Likewise, the continued strength and success of our nation also depends on an improved infrastructure system that is in good shape and safely incorporates innovation and technology. Improving our crumbling infrastructure isn’t a partisan issue and we must work diligently in the months ahead to make it happen.

I appreciate the President’s vision for our country and I look forward to working with my colleagues to ensure that the strength of our country only grows in the days ahead.”

“Tonight, President Trump challenged Congress to break through partisan gridlock and get working for the American people. That’s what we were sent to Washington to do: work at getting real things done. He outlined an ambitious path forward and I commend him.

“I was pleased to hear the president discuss his plans to lower the cost of health care. That’s a top priority of mine in the Senate. Congress should immediately break up the big government-big insurance axis and lower health care prices for Americans. We also need to guarantee protections for those with pre-existing conditions.

“The president was also right to emphasize border security tonight. Supporting border security shouldn’t be hard. I can only hope that my Democrat colleagues will put their partisan vendettas and 2020 presidential aspirations aside to tackle this pressing crisis. We've got to get an immigration system that works for Missouri, and it begins by putting American workers ahead of those who come here illegally.”

In the #SOTU, I was pleased to hear @POTUS recognize the importance of trade, but I continue to have concerns about the value & practice of tariffs, especially when our agriculture exports end up in the retaliatory crosshairs. 1/2

“Missouri Democrats agree that we need to bridge the divisions that have led to gridlock in Washington. However, President Trump has so far proven totally incapable of being an inclusive leader that brings people together for progress. Any way you look at it, Trump’s first two years have been marked by failures like the longest government shutdown in history and a tax bill that gave massive tax cuts to the rich and big corporations, hurting workers and the middle class. Our party will hold the President accountable to Missourians who are looking for the results he said that only he could deliver, including his promise to restore opportunity in the places left behind by an economic system rigged to benefit the wealthy.”

“Tonight, the President laid out an optimistic agenda to unify our country and move America forward. He reminded us of what America can accomplish when we work together, of how our economy is booming, and that Americans are truly better off because of tax reform. His vision for a safe and legal immigration system that protects those who are most vulnerable while securing our border from the flow of illegal drugs is something I believe we can all support. His focus on the need to strengthen our healthcare system by improving access to affordable prescription drugs is a necessary priority. Finally, I was pleased to hear the President’s continued prioritization of national security. As a senior member of the House Armed Services Committee, I’ll be working with the Administration to further strengthen our armed forces and ensure that our men and women in uniform continue to be the most powerful fighting force in the world. I believe and agree with what the President said: we can choose greatness or gridlock. Now is the time for all of us to work together for the common good and choose greatness.”