In 2017, more than $16 million was spent in overtime pay. That’s more than double the budgeted amount.

The audit was released during a city council committee meeting Wednesday morning.

The audit compared KCFD to departments in cities with similar population size, among other factors.

The report showed that KCFD has the third-highest expenditures compared to the other eight cities.

When it comes to overtime pay, KCFD was the highest. The city with the second-most overtime pay was Sacramento, with about $11 million in 2017.

The report broke down budgeted money versus actual overtime expenses for KCFD. 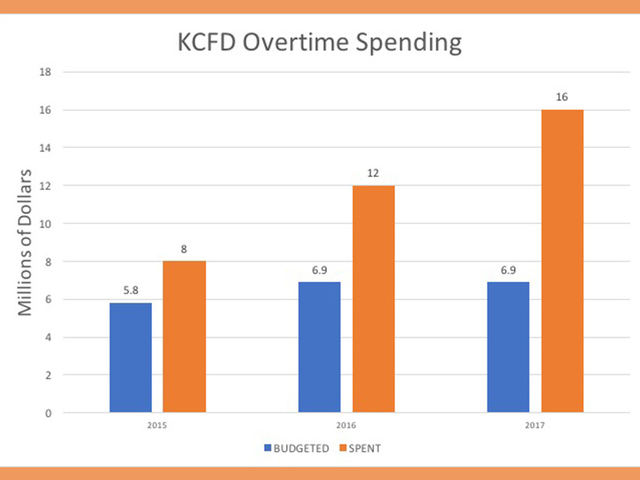 "To see that trajectory is very concerning because that means something else can't be funded because of that overtime number," said Councilman Scott Wagner, chairman of the city's finance committee.

Kansas City, Kansas, had the lowest amount of actual overtime pay compared to the other eight cities.

The audit showed some differences in policy when it came to ensuring lower overtime pay.

The Cincinnati Fire Department said it provided extra incentives for selling back sick pay, and restricted overtime for employees who have used more than 120 hours in a year.

In Jacksonville, the fire department takes a different approach. It said under a collective bargaining agreement in 2012, the city imposed a strict 5 percent cap for employee leave. Five percent over the assigned daily staffing amounted to approximately 19 people off per day.

Jacksonville Fire said it also adjusted recruit weekend rides to help alleviate overtime on weekends. That was followed by shortening the recruit training program from 12 weeks to six to increase the department’s relief numbers. The department said its overtime issues are “directly related to our historical low relief level of 9 percent over minimum staffing levels. Normally we're 23 percent.”

The report showed that while the fire department staff is nearly fully staffed, the EMS staff is at 67 percent.

"When you don't consistently have enough people to cover ambulance shifts either because people are sick or are on vacation, whatever the case may be, we have to turn to overtime to provide the staffing necessary to continue that service," said Wagner.

A notable part of the audit showed that KCFD has the highest number of employees out of work due to injury on the job. The KCFD stat was eight times higher than the next-highest department.

The report also showed that the number of non-medical incidents (such as dumpster fires, vehicle fires, grass fires etc.) was in the middle of the pack compared to the other cities. But when it comes to structure fires, KCFD responds to the most. In 2017, the department responded to more than 1,500 structure fires. The next-highest city was Cincinnati.

KCFD EMS responded to third-highest number of medical-related incidents compared to the eight other cities.

After the committee meeting during which the audit was released, fire officials said this has been an ongoing issue, and the city council will allot more money in their budget for overtime in the future.

When we spoke with Mayor Sly James Wednesday, he said he wants to see the city’s financial report before he comments on the audit.

"We are watching what's going on this fiscal year to see if we are beginning to get it managed better by our fire management staff," said Wagner.

The city is currently looking for a permanent Fire Chief. A city spokesperson told 41 Action News overtime management will play a factor in the city's decision.