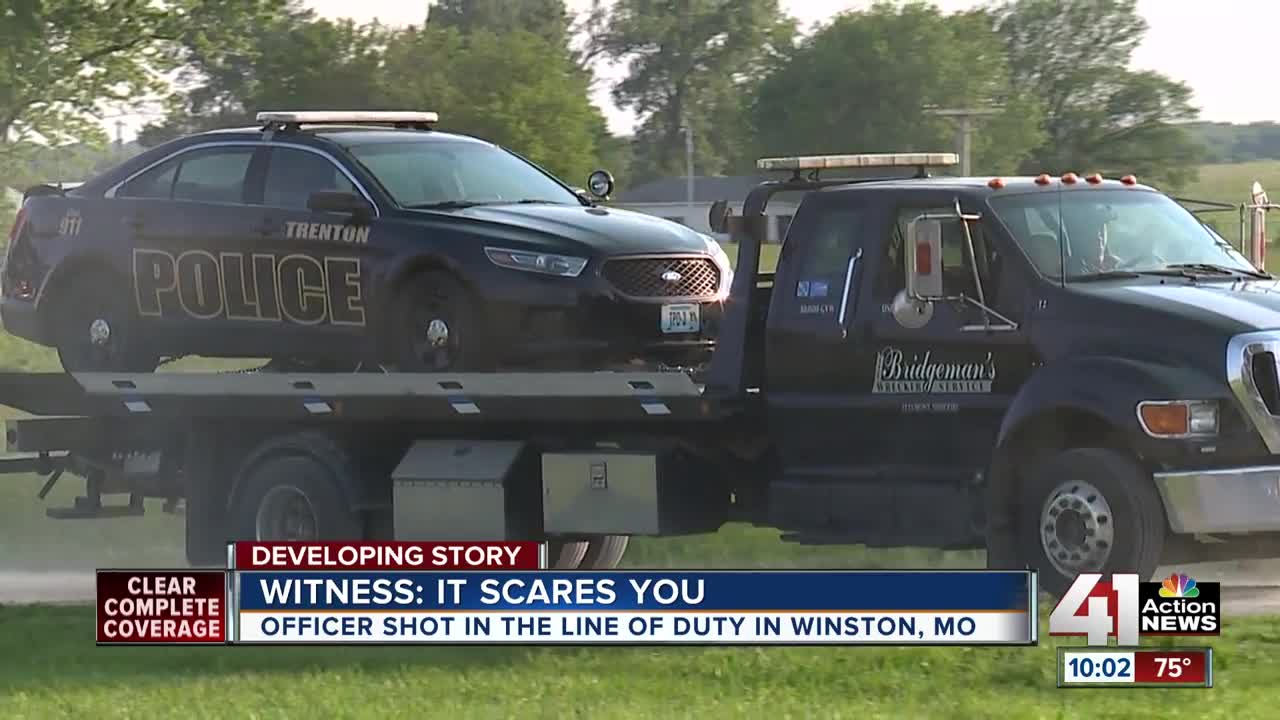 A police officer transporting a prisoner was shot at a convenience store Friday afternoon in Winston, Missouri, according to the Daviess County Sheriff's Office. KANSAS CITY, Mo. — A police officer transporting a prisoner was shot Friday afternoon near Winston, Missouri, according to the Daviess County Sheriff's Office.

The Missouri State Highway Patrol confirmed that a female officer with the Trenton, Missouri, Police Department was transporting a prisoner — later identified as Jamey A. Griffin, 38 — southbound on U.S. 69 to St. Joseph for a 96-hour mental evaluation at Mosaic Life Care Medical Center.

As she drove into the Winston city limits shortly before 3 p.m., a struggle ensued inside the officer's vehicle over her handgun. The officer was shot in the abdomen.

Shortly after the incident occurred, neighbor Lori Norton said she saw a heavy police presence swarm to the scene.

“We watched as police arrived and state highway patrolmen came,” she said. “It scares you. It’s like holy cow.”

After hearing the details of what happened, Norton told 41 Action News that the incident left her feeling shocked.

“It used to be that small towns were safe,” she said. “Now, you just don’t know. Things like that aren’t supposed to happen in a little bitty town.”

Highway Patrol Troop H Sgt. Jake Angle said the suspect was restrained for transport, so it's unclear how he got free.

Emergency medical personnel responded to assist the officer at the Winston Pit Stop, a gas station and convenience store located off U.S. 69. She was transported by air ambulance to a local hospital.

The unidentified officer was listed Friday night in critical condition, according to the Highway Patrol.

The incident occurred while the transport was in progress and the officer eventually stopped at the gas station parking lot. The Trenton police cruiser the officer was driving was taken from the scene by a flatbed tow truck.

As the investigation unfolded on Friday, traffic was blocked off along U.S. 69 for several hours.

Cindy Martin was one of several neighbors who waited to get home as she kept the officer who was shot in her thoughts.

“In these times, I’d really be scared for being an officer,” she said. “I hope she gets better. It’d be nice to see her be able to go back to her job and do what she was doing.”

The suspect is in custody, according to Daviess County Emergency Management. Angle said the male suspect was being treated at an area hospital after suffering a gunshot wound to the hand.

"Anytime an officer's involved in something like this, just trying to do their duty on a daily basis, it's tragic," Angle said. "Anytime, because day in and day out, officers, we serve we protect the citizens. That's our primary goal, so anytime you hear this as a fellow officer it's concerning."

Law enforcement was notified about the shooting around 3:30 p.m. and have asked the public to avoid the area around U.S. 69 on Friday evening as the investigation continues.

Deputy Patrick Rohrer died June 15, 2018, from injuries suffered when Antoine Fielder got a gun and shot him. Deputy Theresa "TK" King died a day later from her own injuries in the attack.

Prisoner transports are an inherently dangerous process. An Independence police officer was attacked June 4 by an inmate, who had already escaped custody at a hospital.

It already had been a tough day for the Trenton Police Department, which posted Friday morning about the death of a retired police officer from the department.

"It is with heavy hearts that we acknowledge the passing of retired Police Lieutenant William 'Bill' Chumbley," a post on Trenton police's Facebook said. "Bill was a great mentor and good friend to the Department. He was well respected and known to be firm but fair. Fair winds and following seas..."

This story will be updated when more information is available.