Overnight storms sent trees toppling in Raytown and Belton. No one had been reported injured as of Thursday morning.

KANSAS CITY, Mo. — After overnight storms and several tornado warnings, some parts of the Kansas City metro spent Thursday cleaning up damage to homes and property as crews worked to restore power in some places.

The National Weather Service reports it appears an EF-1 tornado did touch down in Overland Park Wednesday night and caused some damage as it moved into Leawood. No injuries have been reported.

This is still preliminary data, but it appears there was a tornado that started in Overland Park, KS and moved into Leawood, KS producing EF-1 damage last night. Luckily, so far no injuries have been reported. #kswx #KCWeather pic.twitter.com/kZqUbuNVJO

The National Weather Service also confirmed two separate EF-0 tornadoes in Belton and Raytown. No injuries have been reported in either of those.

Here is a summary of the reported damage across the area impacted by Wednesday night’s storms, broken down by location:

At 133rd and Mission, the intersection remained closed through the night and into the morning rush hour as crews worked to repair the lines and signals. A speed limit sign and a few trees were also snapped at the base in the area.

Update and an interesting sight from 133rd and Mission. @41actionnews pic.twitter.com/MlTEj5qJZI

The power outages forced one school to close its classrooms for the day. Blue Valley Schools tweeted early Thursday morning that Mission Trail Elementary would be closed. The rest of the district’s schools remained open.

A large oak tree fell onto a carriage house in Raytown, Missouri, breaking two holes in the roof.

The property owner said a family of five rents the carriage house. Everyone was inside at the time of the crash, but no one was injured.

The property owner said the tree fell at about 9:30 Wednesday night during strong winds and storms. The owner estimated the tree to be about 200 years old.

A look inside the house at 81st-ish and Raytown Road. A family of five made it out safely, without a scratch. https://t.co/NA40Usp63m

The family renting the carriage house, a married couple and three daughters all younger than 10 years old, moved to the main house of the property overnight.

The man renting the carriage house tweeted a video showing the inside of the house with the caption "I guess you can say we're lucky."

A battalion chief with the Raytown Fire District said the city received multiple reports of downed power lines and broken tree limbs. But he said as of about 10 p.m. Wednesday, there were no reports of injuries connected to the storm. 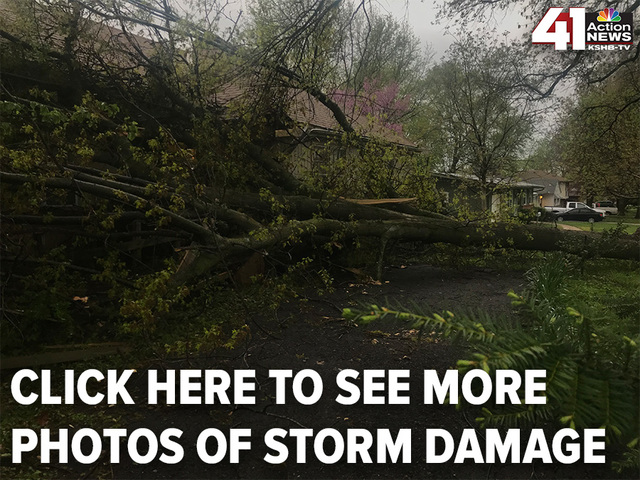 Reports of a tornado touchdown near Northwest Chipman Road and 50 highway remained unconfirmed Thursday morning, however there was wind damage to several unsecured sheds in the Lowes parking lot at Summit Woods Shopping Center.

Lee’s Summit Public Works crews cleared a few roads blocked by fallen trees as others worked to repair one power outage that affected more than 60 people.

Lee’s Summit Fire reminded people to avoid downed or low-hanging power lines and call 911 if they encounter the hazard.

Officials also said they would have a better assessment of the damage once they were able to see it in the daylight.

The storms also took out trees, branches and power lines in the area.

41 Action News spoke with the grandson of a homeowner whose house was slightly damaged by a large tree branch. It snapped at its base where it connected to the trunk and crashed down onto the homeowner’s walkway. There was also damage in the backyard.

The grandson said people were home at the time, but no one was hurt.

Belton officials said they will be picking up tree branches and other storm debris on Friday, postponing it until then due to another round of weather expected Thursday afternoon and evening.

The KC City Manager tweeted crews will be working until 7 p.m. tonight to clear and remove damaged trees from streets.

Residents are asked to call 311 to report storm damage.

As of around 1 p.m., the 311 center had only taken about a dozen calls about storm damage.