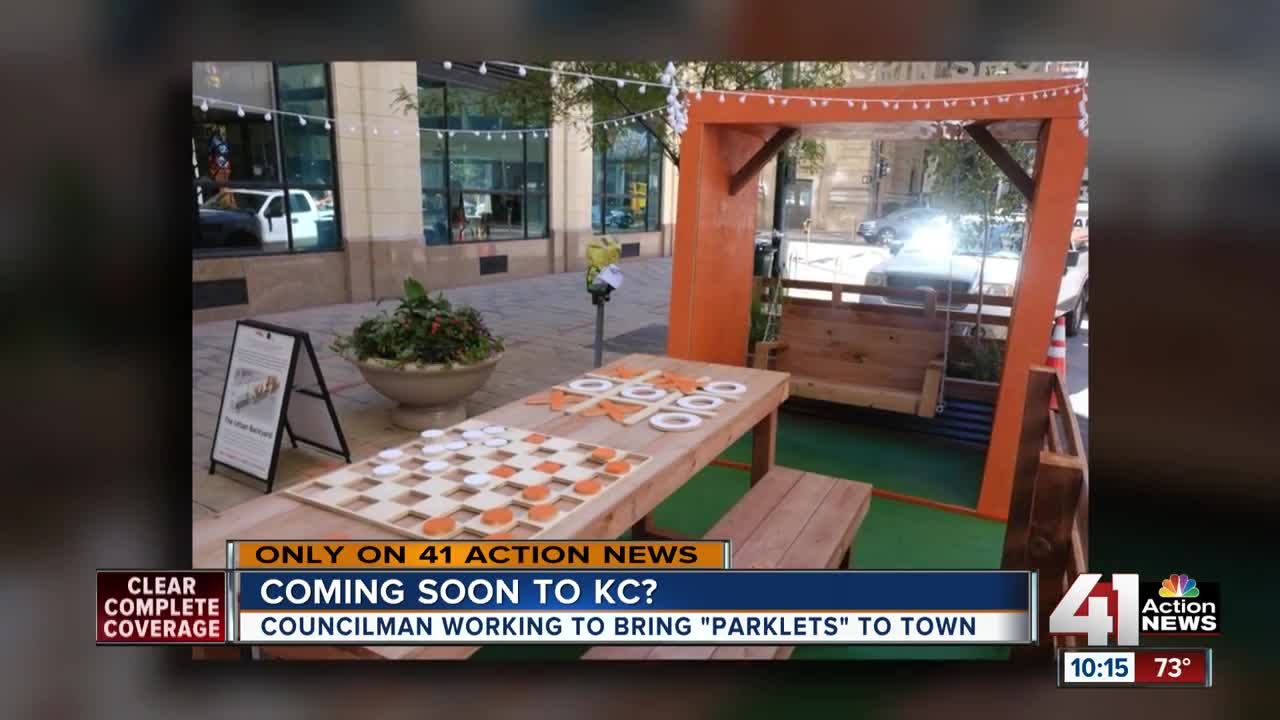 A councilman is introducing an ordinance that would allow for sidewalk extensions known as "parklets" in the city. KANSAS CITY, Mo. — A Kansas City, Missouri, councilman is working an ordinance that would pave the way for sidewalk extensions, known as "parklets," to be installed across the city.

"The idea is just to reclaim a little bit of extra pavement for the use of people," Councilman Eric Bunch said.

Parklets are essentially mini-parks — often outfitted with seating, landscaping, bike racks and even art — but some also serve as sidewalk cafes. They replace on-street parking spaces or simply fill unused pavement, where parking is not allowed.

Such mini-parks have been popping up all over the country from San Francisco to Columbia, Missouri.

"We created something called the urban backyard, which included a porch swing, seating for about 14, secure parking for scooters and bicycles, and a bunch of yard games," DuRon Netsell, who leads Better Block KC, said.

Better Block KC temporarily redesigns intersections and streets to show how they could be more useful and safe for pedestrians, bicyclists and drivers.

While parklets have been shown to slow down traffic where they're installed, that's not the only safety benefit Netsell sees.

"By bringing people on to the sidewalks and interacting with their neighbors, we're creating a safer space for everyone," he said.

Bunch is working with the city's legal department on a code revision to allow parklets.

Property owners would apply for permits and pay a fee, which would fund a safety inspection program. There would be two different kinds of permits, one for mini-parks and another for sidewalk cafes.

Bunch said no parklet would be installed without the adjacent property owner's approval.

While some could be created without taking away a parking space, others would take a maximum of one or two spots.

"I think that the trade-off is oftentimes worth it to say, 'We're gonna put 25 people here sitting and eating or enjoying a little park space in the shade versus one person's vehicle,'" Bunch said.

Bunch's ordinance will need to go before a committee before the full council would consider it.

At least one business owner is already on board.

Thou Mayest Coffee Roasters Co-Founder Bo Nelson hopes to install a parklet in front of their new building at 519 E 18th Street.

"It just brings people out into the street more. It slows the cars down. It's a little more of that see and be seen type of atmosphere that you look for in a busy, energetic space," Nelson said.