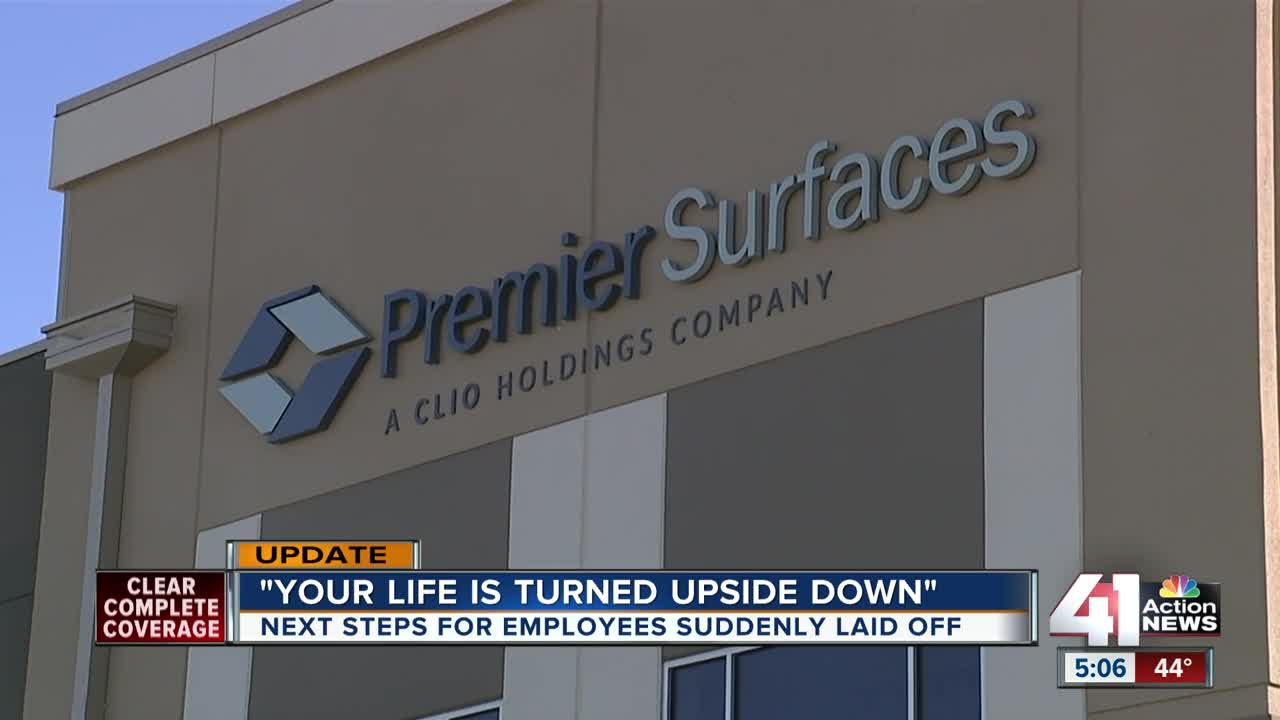 RIVERSIDE, Mo. — Following the termination of 200 jobs in the metro, former employees of Premier Surfaces accuse the company of not paying them for their finals days of work before the business closed down earlier this month.

The decision from the custom countertop company, which had an office in Riverside, left many employees and customers in the dark.

“All of a sudden, your life is turned upside down,” said Drew Borham, who worked for Premier Surfaces for almost 10 years. “All of a sudden, we get told, ‘Sorry, we tried everything we could. I guess it wasn’t enough. Thanks for all your help. See you later.’”

Borham was one of several former employees who reached out to 41 Action News following the announcement.

One woman said the sudden closure led to tough times in her household.

“They [Premier Surfaces] are still holding my 401K hostage,” she wrote. “I now have $13 to my name, am about to be evicted and my car is about to be repoed.”

For Borham, the job loss also has brought an impact close to home.

The closure also has hit customers.

One man, who said he lost his home in a California wildfire in 2018, described how the decision by Premier Surfaces led to several special countertops not being installed inside his “dream home” being built in Lenexa.

“My wife was distraught hearing this as she had fallen in love with one of their slabs for our kitchen island,” he wrote. “They are essentially holding those pieces hostage and leaving customers to make new selections elsewhere.”

Clio Holdings, the ownership group that oversaw Premier Surfaces, did not offer a comment for the story when contacted by 41 Action News on Tuesday.

For the workers who claim they still haven’t received a paycheck for the final days of work, possible recourse could lie ahead.

Multiple attorneys who spoke to 41 Action News by phone said the affected employees could contact both the Missouri and U.S. departments of labor for further investigation of their cases.

The former employees could also decide to take legal action and take their cases to the courtroom.

“They have to prove that they worked and they weren’t paid,” said attorney Matthew J. O’Connor. “It’s just a matter of where does that money come from. Depending on the corporate structure of the company, they could basically sue the company and force them to liquidate assets in order for them to be paid.”

As for affected customers, the Better Business Bureau said state officers could help.

“In the event of a sudden business closure, a customer who believes that they are owed compensation for a lack of services rendered does have the option of filing a complaint through their state’s Consumer Protection Division, run by the state Attorney General’s Office,” a statement read. “This can either be done by contacting the state Consumer Protection Hotline or filing online through the Attorney General’s website.”

A link to the page to file a formal complaint in Missouri can be found here .

Customers who used other companies to buy Premier Surfaces products should also reach out to that business for guidance on what to do for the items they bought.

“I want people to understand that what they [Premier Surfaces / Clio Holdings] have done is wrong,” he said. “I want my friends to get what they’re owed, and I want the right thing to be done in the long run.”