The extraordinary action came as legislators continued debate over a resolution that would condemn tweets made last weekend by President Trump, which even some Republicans called “inappropriate.”

As he presided over the debate, Cleaver grew increasingly frustrated with the tenor of the discourse.

“I came in here to try to do this in a fair way,” Cleaver said. “I kept warning both sides, hoping we could get through. … We don’t ever want to pass up an opportunity. It seems to escalate.”

Video posted by MSNBC shows what happened next, as Cleaver continued, “We want to just fight. I abandon the chair.”

JUST IN: Rep. Cleaver, who had been presiding over the House chamber, declares "I abandon the chair” and drops gavel on the dais as House members await ruling on if Speaker Pelosi's comments on the president's tweets will be taken down. pic.twitter.com/SzdZqfLrBM

Cleaver's office later released a statement about his frustration with the proliferation of hyper-partisan politics and the recent lack of decorum in our national political discourse.

I want to thank Leader Hoyer for assuming the chair and reading the parliamentarian’s ruling following my abdication. Like the vast majority of Americans, I’ve grown increasingly frustrated with the childish rancor of our public discourse. Our inability to conduct ourselves in a civil and respectable fashion has paralyzed the most powerful government in the history of the world, and for what? A 10-second soundbite on prime time news and a few thousand twitter followers?

If this is what our government has come to, then we are in serious trouble as a nation. My frustration reflects that of my constituents and the American people as a whole. I have spent my entire life working with people of all faiths and stripes in an effort solve real-world problems with concrete solutions, but never have we been this divided and this unwilling to listen to countering opinions or accept objective truths. If we’re going to solve the cataclysmic challenge of climate change, the prodigious problem of income inequality or the evasive challenge of equal justice under the law, it is going to take all of us, Democrat and Republican, liberal and conservative, men and women, elders and youth.

I have unshakeable and eternal faith in what we can accomplish as a people, but we can only overcome these challenges as a union. I truly believe American democracy is the greatest experiment ever conducted by a society. However, a house divided against itself cannot stand, regardless of how strong the foundation. I call on all of my colleagues and all of America to listen more and talk less, to show compassion for those who are in pain, and to resist the temptation to fight when others wish to escalate. 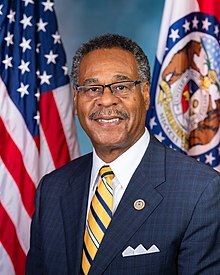