Scammers targeting family of Desirea Ferris, missing over a year

The family of a woman who has been missing for more than a year say a scammer sent them a message asking for a ransom.

Tam said she got one of the worst text messages of her life the other night. She was doing dishes after dinner.

"Your daughter's been kidnaped and being used as child sex trafficking. To pay a ransom of $2,000. They would drop her off at a gas station close to my house, not to tell anybody. That if I told anybody they'd kill her," Tam said, reading off her phone.

Tam's 19-year-old daughter, Desirea Ferris, has been missing since May 2017. The family has tirelessly searched for her, pinged her phone, worked with law enforcement and investigators.

"No parent wants to get a message like that, especially 484 days after their child's been missing," Tam said.

It was a scam, and not the first time the family has been targeted. 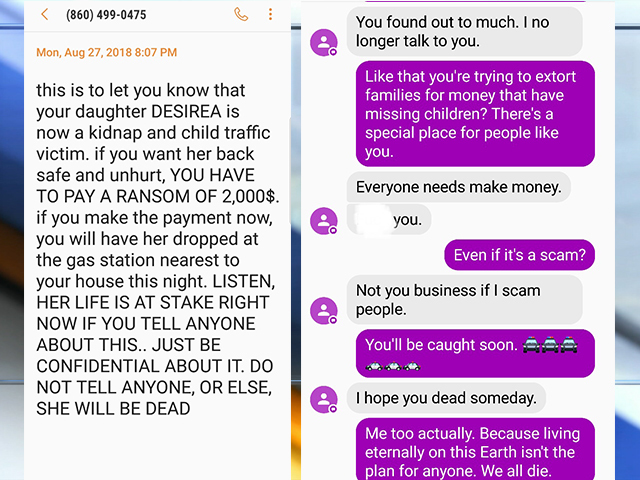 Left is the message sent to Ferris's mother. Right is the conversation the private investigator had with the would-be scammer.

They immediately called their private investigator, who cannot be named at this time, but who is heavily involved in the case.

"A lot of people are able to go ahead and make a voiceover IP phone number using different various apps, even Google Voice has one out. Textfree, TextNow," the private investigator said.

Basically, a scammer creates false phone numbers to carry out the scheme.

The number has a Connecticut area code, but the PI found out the IP address traces back to India.

The scammer demanded the family send money and Apple gift cards to an address in Tulsa, Oklahoma.

"They find somebody in the United States to where they go ahead and send the money to that person, that person takes their cut, and sends the money overseas," the PI explained.

Any normal person without the right technology would not be able to track where the phone numbers are actually coming from. The scammer can have more than 10 numbers on just one phone.  A victim could call those numbers and the scammer could actually receive the call, and still, it's untraceable.

The PI lead the scammer on a little bit, pretending to be Ferris's family.

Toward the end of the conversation, the scammer gave up and said, "You found out too much. I no longer talk to you."

The PI responded, "Like that you're trying to extort families for money that have missing children?"

The scammer said, "Everyone needs make money," and going on to add that it's no one's business if he scams people.

The PI said this type of scam is becoming even worse than the IRS scams most folks are familiar with. The best advice, the PI said, is to immediately Google the phone number. Chances are, you'll find out if it's a landline or voiceover IP address. You might also find complaints from other families who said they've been targeted by the same number as Ferris's family was.

Mo Reintjes with National Missing and Unidentified Persons System (NAMUS) said she sees scams like this all the time in her work with families of missing people.

"It's hard. It's tough. Your mind, even though you may not be a person who would normally believe something like that, at that point your mind is like, 'Oh my God, somebody knows,'" Reintjes said.

Reintjes said the best thing a family can do is turn over a sketchy message to the police.

"For the families that haven't received one yet, when you get it, don't freak out. Look at it, take it for what it is, and run it through your law enforcement just to make sure," she said.

Tam said she looks over her shoulder constantly and trusts no one. This scam attempt only makes things worse.

Tam said the scammers are just as bad as those who are responsible for her daughter's disappearance.

"Don't sit there and prey on families that are already devastated. Get a real freaking job," Tam said.

Anyone who has information about Desirea Ferris's whereabouts can anonymously contact Liberty Police, or any other law enforcement agency.

Investigators are looking into new leads in the case. The reward money is now up to $10,000.