On Tuesday voters head to the polls to decide on some of the funding to replace the Buck O'Neil/Broadway Bridge.

KANSAS CITY, Mo. -- The future of the Buck O'Neil Bridge, used by 44,000 commuters each day, is partially in the hands of voters.

On Tuesday, they will head to the polls to vote on a renewal of the city's capital improvements sales tax, which would help pay for the bridge's replacement.

The structure, which was first called the Broadway Bridge, opened on Sept. 5, 1956.

"They had parties, they had dignitaries, they had receptions," Jeremy Drouin, Manager of the Special Collections Division at the Kansas City Public Library, said of the much-anticipated opening.

Items in the collection, like the ceremonial ribbon-cutting scissors, tell the story of the bridge. It was built as a main artery for commerce and commuters over the Missouri River.

"For one, it could handle the traffic. It had four lanes as opposed to two for the old Hannibal Bridge," Drouin explained.

The project is estimated to cost $200 million. According to the Mid America Regional Council, it will split the hefty price tag with the Missouri Department of Transportation and the city. 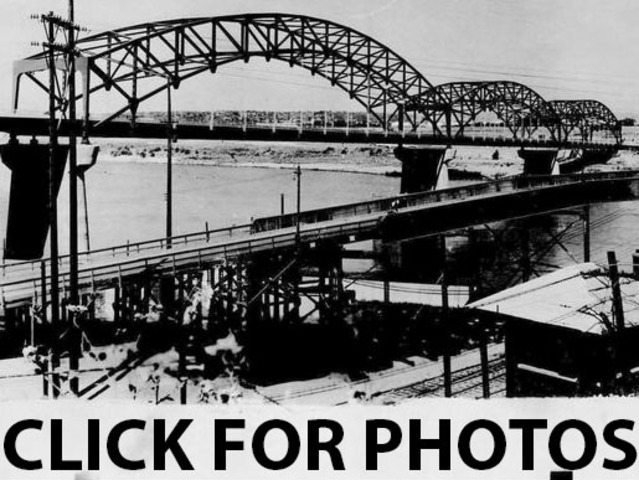 The bridge that arrived with so much fanfare in the '50s finds itself in a different position today, in desperate need of repairs and eventual replacement.

That replacement will cost $200 million. The hefty price tag will be split between the city, the Missouri Department of Transportation and the Mid America Regional Council, which is allocating federal funds.

City leaders committed a total of $60 million to the Buck O'Neil project. If the capital improvements sales tax renewal passes on Tuesday, the city would dedicate $5 million a year to the bridge replacement. Mayor Pro Tem Scott Wagner said securing that funding will help them access even more.

"Once we have been able to say that we have the dollars in hand, that will help us go to Washington and ask for more federal grants," he explained.

MoDOT plans to contribute $100 million, but a spokesman said Monday those funds have not been secured.

Wagner hopes the fanfare that accompanied the Broadway Bridge in 1956 can return with the opening of a new Buck O'Neil Bridge now.

"Well it would be a shame to use those scissors only one time," he said of the oversized shears in the library's special collection.