What you need to know: Chiefs Kingdom Champions Parade

Organizers of the Chiefs Kingdom Champions Parade announced details of the route and more Tuesday morning. The parade is expected to draw 1 million people or more Wednesday morning to downtown Kansas City, Missouri.

With several inches of snow possible, and recalling the challenges presented by the Royals victory parade in 2015, here are some tips and information you need to know ahead of the parade to honor the Super Bowl LIV champion Chiefs.

Just like the Royals' parade more than four years ago, a victory rally, which is expected to begin around 1:30 p.m., will take place in front of Union Station after the parade. 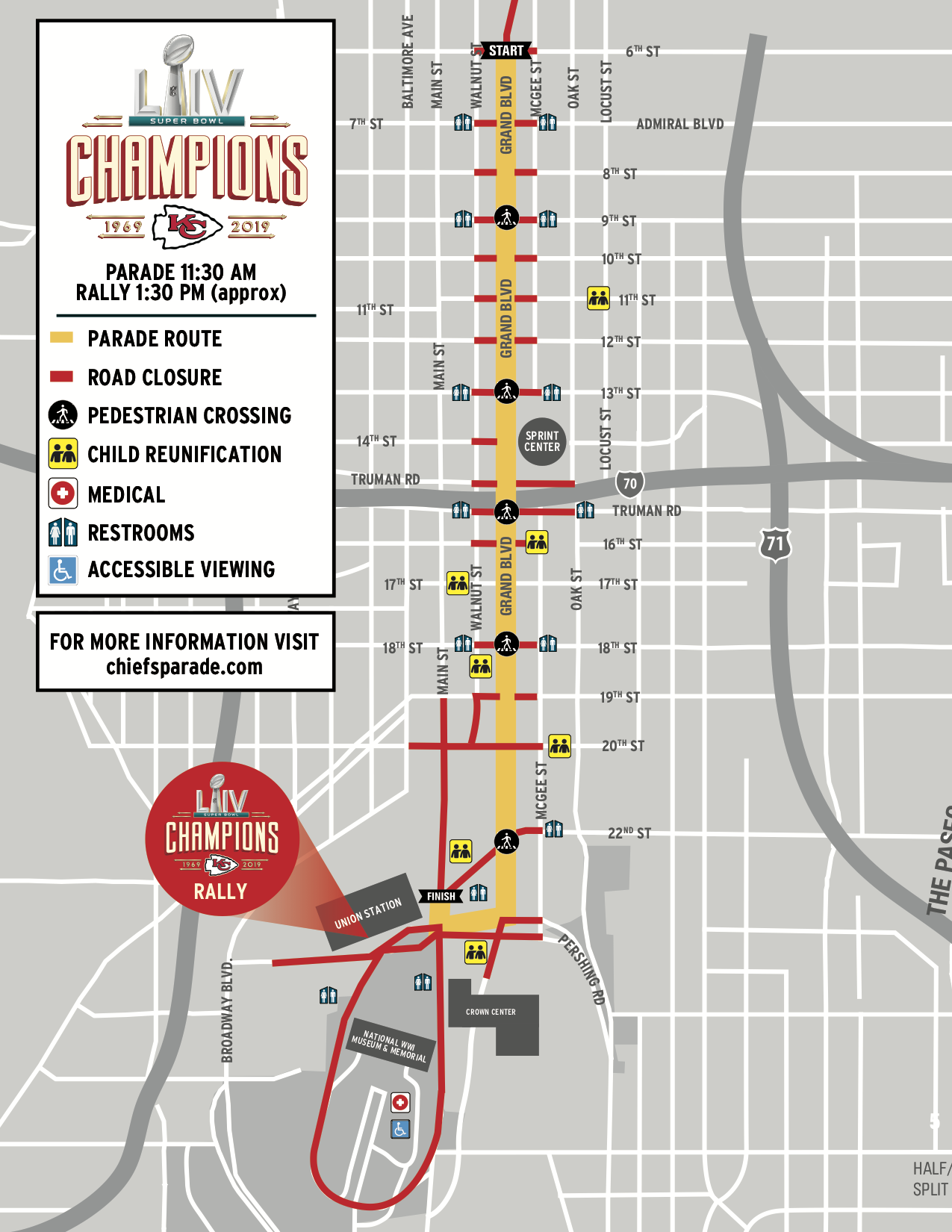 The Kansas City Police Department will take missing children to designated locations where parents can find them.

Those child reunification centers are at the following intersections:

And it would be great if they didn't get lost in the first place! #chiefsparade pic.twitter.com/wA7k6XlnPk

RideKC is expected to have 425 buses in service to shuttle fans from parking areas to the outskirts of the parade route. That is double the amount of buses used during the Royals 2015 World Series celebration parade.

Each shuttle has its own pick-up and drop-off location. Those five locations will be at:

A KCATA spokesperson said where you get picked up is where you’ll get dropped off, which the organization hopes will streamline the boarding process after the parade.

All drop-off and pickup points will be one-half mile to one mile from the nearest point on the parade route, according to RideKC.

The first shuttles will leave the park-and-ride locations at 7 a.m., and they will continue running until 11 a.m.

After the celebration, shuttle service will be provided until 6 p.m. Wednesday. Buses will only return fans to the park-and-ride locations.

Coolers, lawn chairs, alcohol, weapons and fireworks will not be allowed on buses. Strollers must be folded before boarding.

The Missouri State Highway Patrol is asking spectators not to park on or along the highways, which was an issue in 2015.

The Missouri Department of Transportation Kansas City office stressed the importance with the likelihood that snow plows will be needed to clear roads and highways, increasing the possibility of crashes.

The city said trucks will begin towing cars that are parked on the parade route at 2 p.m. on Tuesday.

The National WWI Museum and Memorial’s north lawn offers a great area to view the victory rally. The Museum and Memorial is inviting all those spectators to visit the museum as well. It will extend its operating hours to 8 a.m to 5 p.m. and offer a discounted admission price Wednesday of $10.

The Museum’s cafe will be serving hot dogs, hamburgers and sandwiches. More food and drinks will be available at a stand in the Memorial Courtyard, near the base of the Liberty Memorial Tower.

Fans can watch the victory rally on a video board on the southeast lawn of the Museum and Memorial grounds.

41 Action News is proud to be the official broadcast partner for all of the events, including the live parade and show.

KSHB-TV is planning a multi-camera production with exclusive access you will see only on 41 Action News, including player interviews

For more information on the parade, click here or text “chiefs parade” to 888777.