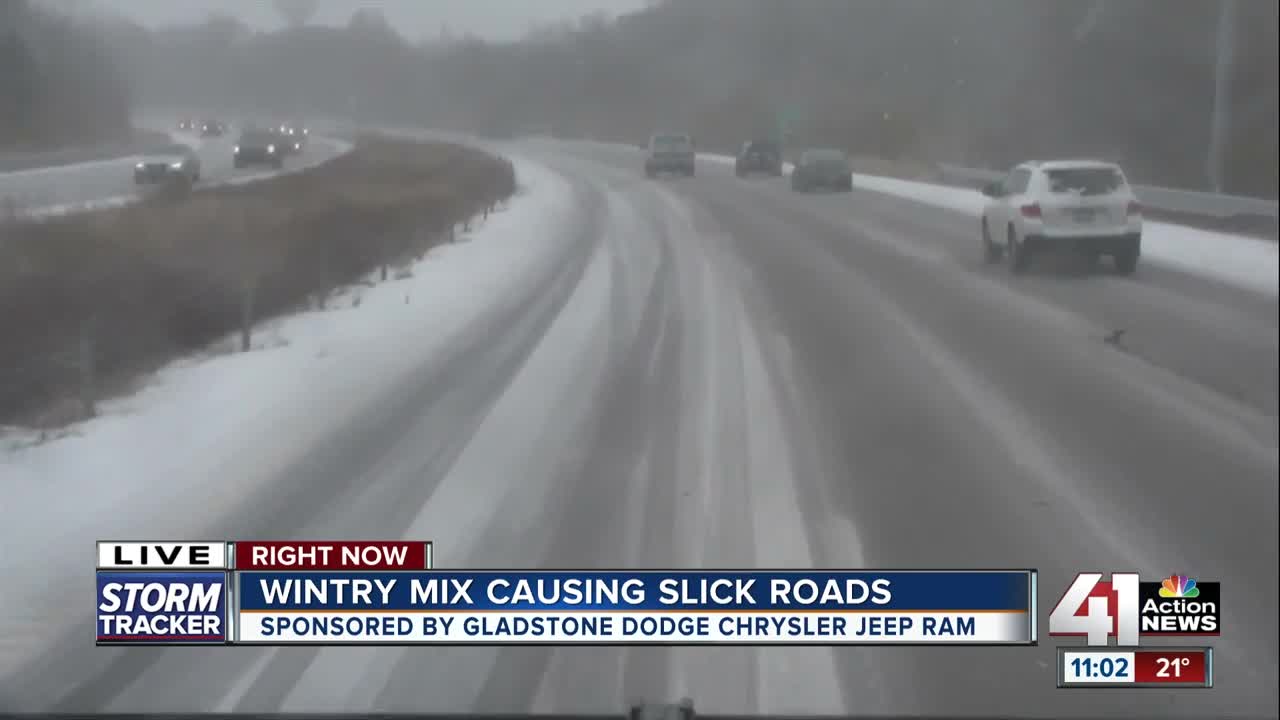 The National Weather Service has extended the winter weather advisory, originally set to end at noon, until 3 p.m. for the Kansas City metro. Drivers should plan on slippery road conditions and limited visibility due to blowing snow. 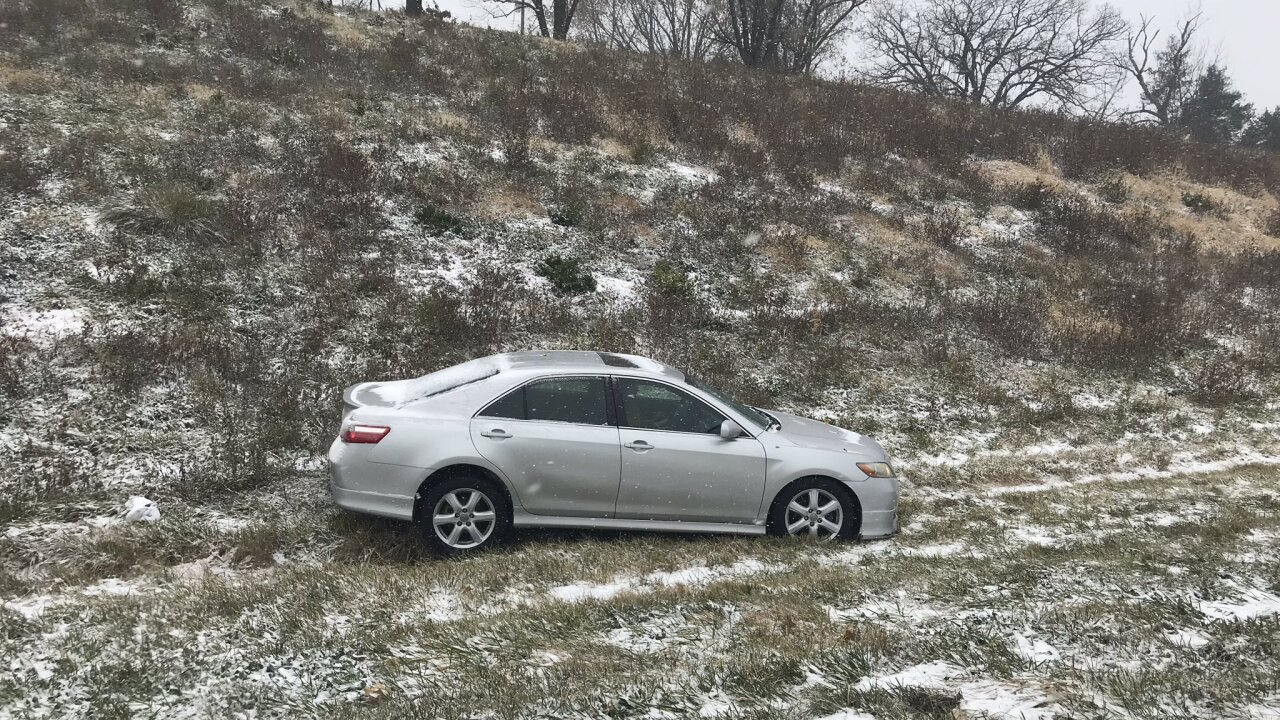 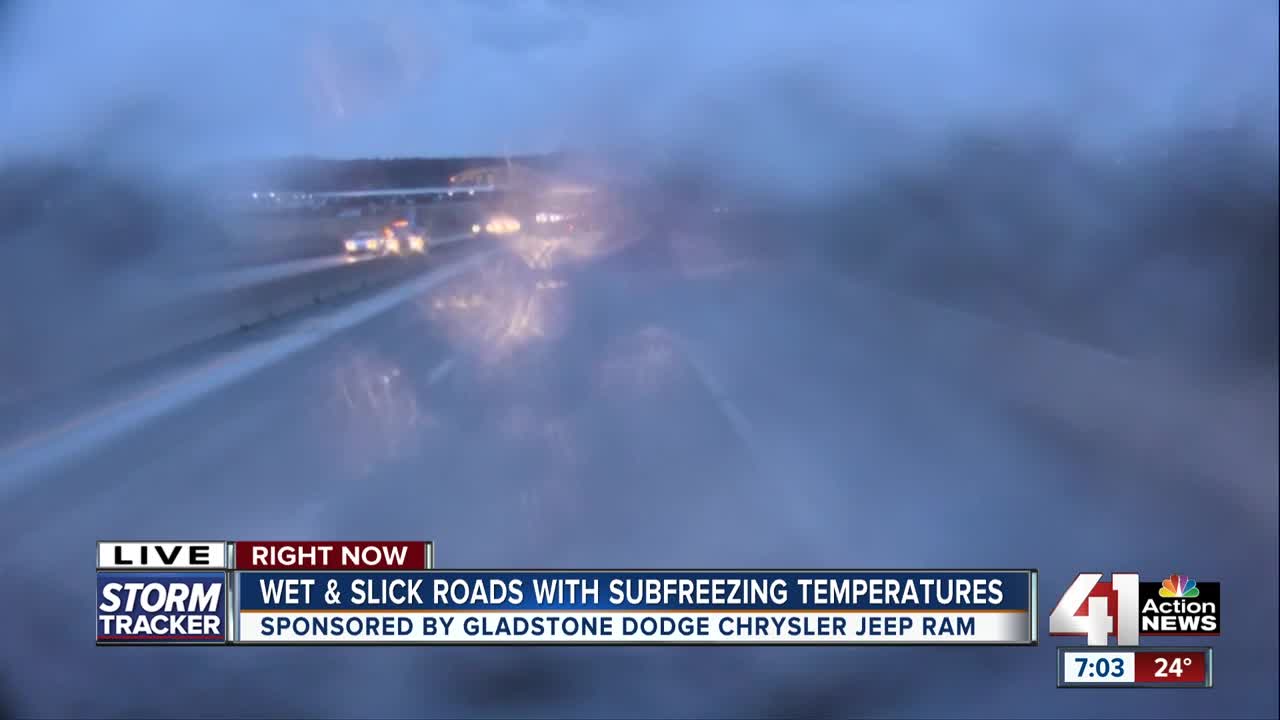 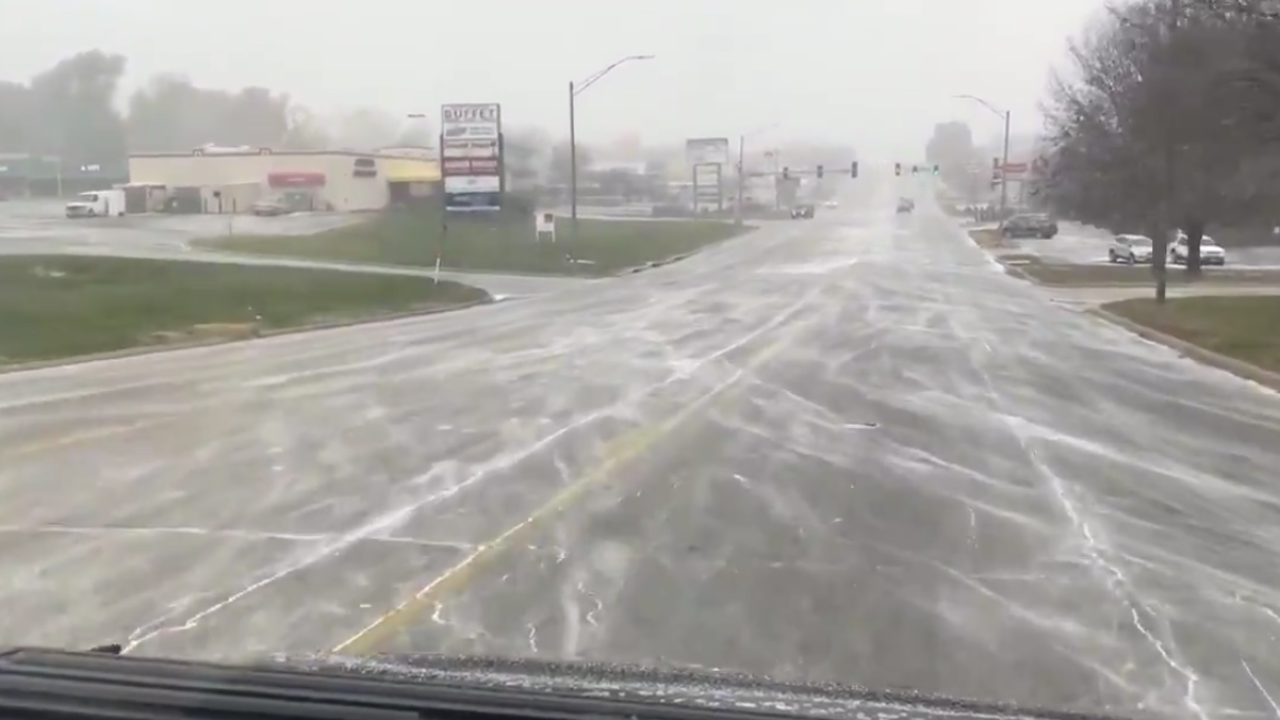 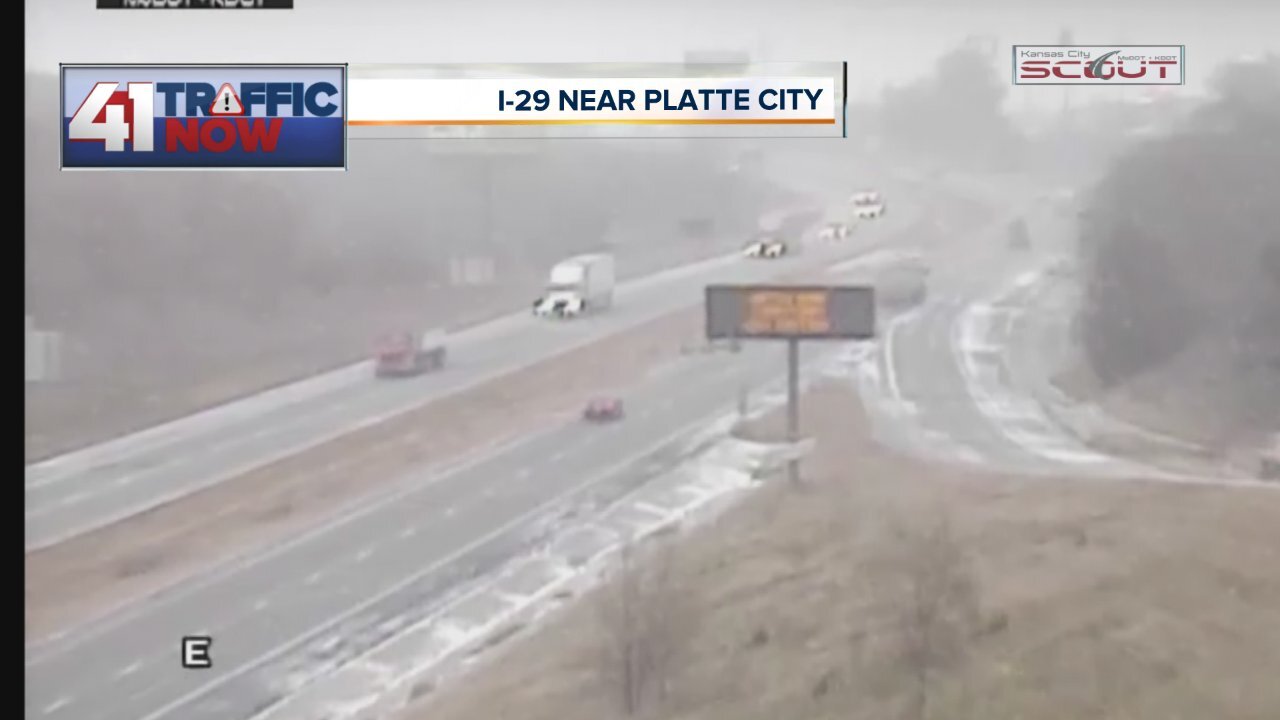 KANSAS CITY, Mo. — This article will be continuously updated with winter weather information to keep drivers informed for their commutes.

As of 6:00 pm troopers have responded to:

As evening comes expect some slick spots on the roadways! #SlowDown #BUPD

3 p.m. - Road conditions have improved dramatically, but there could still be a few slick spots to watch out for on the evening commute.

2 p.m. - The Missouri State Highway Patrol said road conditions were improving, but drivers should still watch for changing conditions during the evening commute. Through 2 p.m., troopers had responded to 145 calls for service, 42 stranded motorists and 57 crashes, including 12 that involved injuries.

12:40 p.m. - Kansas Department of Transportation officials told 41 Action News reporter Charlie Keegan that 20 truck were deployed in Johnson County starting at 6 a.m. The crews will likely wrap up mid-afternoon but will reamin on standby. The truck were mainly focused on salting street, but plowed some areas of accumulation.

12:15 p.m. - Roads are slick on both sides of the state line. The snow continues to come down, and temperatures remain very cold. That means the roads will likely be slick for a while still.

Roads are slick in KCMO. Be careful. pic.twitter.com/zR8A00N5Lj

11:15 a.m. - The National Weather Service has extended the winter weather advisory, originally set to end at noon, until 3 p.m. for the Kansas City metro. Drivers should plan on slippery road conditions and limited visibility due to blowing snow.

The Clay County Sheriff's Office said a deputy's patrol car was struck Monday morning while helping another motorist who slid off the road. The deputy and a K-9 officer in the patrol car, as well as the other motorists, were all OK, the sheriff's office said.

A K9 Deputy’s patrol car was struck this morning while trying to help another motorist who slid off the road. The deputy, K9 and other motorists are ok.

Please reduce your speeds and give plenty of room to emergency workers and your fellow motorists! #DriveSafe #mowx

10:45 a.m. - Snow and icy roads have caused hazardous conditions for drivers on the Missouri side of the state line. The Missouri State Highway Patrol said it has responded to 45 calls for service and 18 crashes, four of which involved injuries. Troopers have also helped 12 stranded motorists.

41 Action News meteorologist Lindsey Anderson said the snow has picked up across parts of the city and will continue through the lunch hour. The snow will continue to accumulate on the sides of roads and untreated surfaces, so drivers should use caution.

The snow has picked up across parts of the city and will continue through the lunch hour. The snow is accumulating on the sides of the road & on untreated surfaces. It's still slick outside so drive carefully! pic.twitter.com/6Yq6xlE6oA

10:15 a.m. - Missouri Department of Transporation officals told 41 Action News reporter Charlie Keegan that the Emergency Operations Center and Snow Desk have been operated to monitor road conditions and update maps. Plow drivers will continue working until 7 p.m. or until roads are clear. They are plowing as well as spreading salt.

10:00 a.m. - Because of the volume of crashes in the area, Overland Park police are requesting that any drivers involved in non-injury accidents do not call for an officer, but walk in accident reports at a later date and move their cars off the roadway. Police suggest exchanging information with the other driver and any witnesses. Overland Park police will prioritize injury accidents. Accident reports can be filed at the Sanders Justice Center or th eMyron Scafe Building.

9:30 a.m. - Windy conditions are blowing snow across the roadway, making it hard to see in some areas. Visibility deteriorates more the farther west you travel.

9:20 a.m. - Interstate 635 northbound at Kansas 5 in Kansas City, Kansas, is closed due to weather and a crash. There are also major crashes on Interstate 70 near 78th Street in KCK and Interstate 35 northbound near the Crossroads.

9:10 a.m. - It's officially snowing in the metro. Downtown Kansas City is seeing the beginning of the snow. It should stick around into the afternoon hours.

9:00 a.m. - Several more crashes are happening around the metro. That, combined with deteriorating visibility, is slowing down traffic around the area. Plan to leave early if you are trying to go somewhere.

8:30 a.m. - A few minor crashes are starting to happen on the Kansas side. Several small crashes can be seen on the Kansas City Scout system on Interstate 35 on the west side of the metro.

8:15 a.m. - Road temperatures have fallen below freezing in much of the metro. Be on the lookout for slick conditions.

8AM ROAD TEMPS: They’re dropping! The pavement has fallen below freezing for the most part in Johnson County, Kansas. Freezing elevated & untreated surfaces will become a BIGGER problem through the morning & afternoon. pic.twitter.com/7B8UlNn9Ne

7:50 a.m. - Snow has moved into the Platte City area. It is getting closer to Kansas City, and will likely affect visibility.

Snow is approaching KC from the north. Here is I-29 near Platte City. The visibility is dropping and snow is accumulating. Be aware of rapidly changing road conditions the next few hours. @41actionnews @JeffPennerKSHB @lnanderson @glezak @GerardJebaily pic.twitter.com/ICwjBIdHSO

7:20 a.m. - A Winter Weather Advisory has been issued for the metro.

7:05 a.m. - 41 Action News reporter Charlie Keegan reported that STORMTRACKER hit its first slick spot. He witnessed a car spin out when hitting the spot, which was on a bridge on Interstate 635 headed northbound over the Kansas River.

7:00 a.m. - Wind could cause visibility issues when the snow finally starts to fall in Kansas City. Drivers should give themselves extra time to get to work.

A very windy start to the morning - be sure to bundle up! pic.twitter.com/KiCg0sWoaO

6:35 a.m. - Snow is tracking south and should approach the metro within the hour.

6:35am RADAR: An area of moderate, wind-driven snow continues to track south & will approach the KC metro within the next hour! Moments of low visibility is possible as wind gusts stay high. pic.twitter.com/vmL41ULVaT

6:25 a.m. - Road temperatures are still slightly above freezing, and there's still no snow in the metro area. Roads are still wet, though, so be careful on bridges.

6AM ROAD TEMPS - staying slightly above freezing between 33-37° in Johnson County, KS! This is a great tool to monitor as our air temperatures come crashing down! pic.twitter.com/Wko1vUQwlq

6:00 a.m. - Ice is starting to build up on surfaces like windshields and signs as temperatures continue to drop. Morning commuters may want to have an ice scraper handy.

Ice is here & you may need your ice scraper this AM. Roads may be slick. Be careful this morning! pic.twitter.com/eW9H4h8sLK

5:55 a.m. - The metro is still receiving a wintry mix, but roads don't appear to be slick just yet. 41 Action News reporter Charlie Keegan is out in STORMTRACKER and said the plows are still out and about preparing for the snow.

We’re on the roads in #41StormTracker as precipitation falls across the Kansas City area.

Just saw a @MoDOT_KC truck on the south loop of I-435. Agencies say give yourself more time to get to work this morning. pic.twitter.com/h4Ad1K6w6Z

5:20 a.m. - Temperatures are dropping quickly and snow is falling in Northern Missouri. The metro is still receiving precipitation, and at this point, slick bridges are the biggest concern.

Time to bust out the winter weather gear! Temperatures are dropping rapidly & the wintry mix continues for those south of I-70. Snow is currently impacting northern MO. Slick elevated surfaces will be the main problem for the early commute! Be safe! pic.twitter.com/dGhMUP4JuE

4:45 a.m. - Precipitation is falling across most of the metro area. At this point, roads are still just click. Plows are still out pre-treating surfaces.

After 8 a.m., the mixture is expected to change over to snow, and windy conditions could affect visibility. Roads could become slick as temperatures continue to fall and the snow accumulates.

Snow should end by 5 p.m., but there could be some slick spots for the evening commute. Wind chills will be near zero.