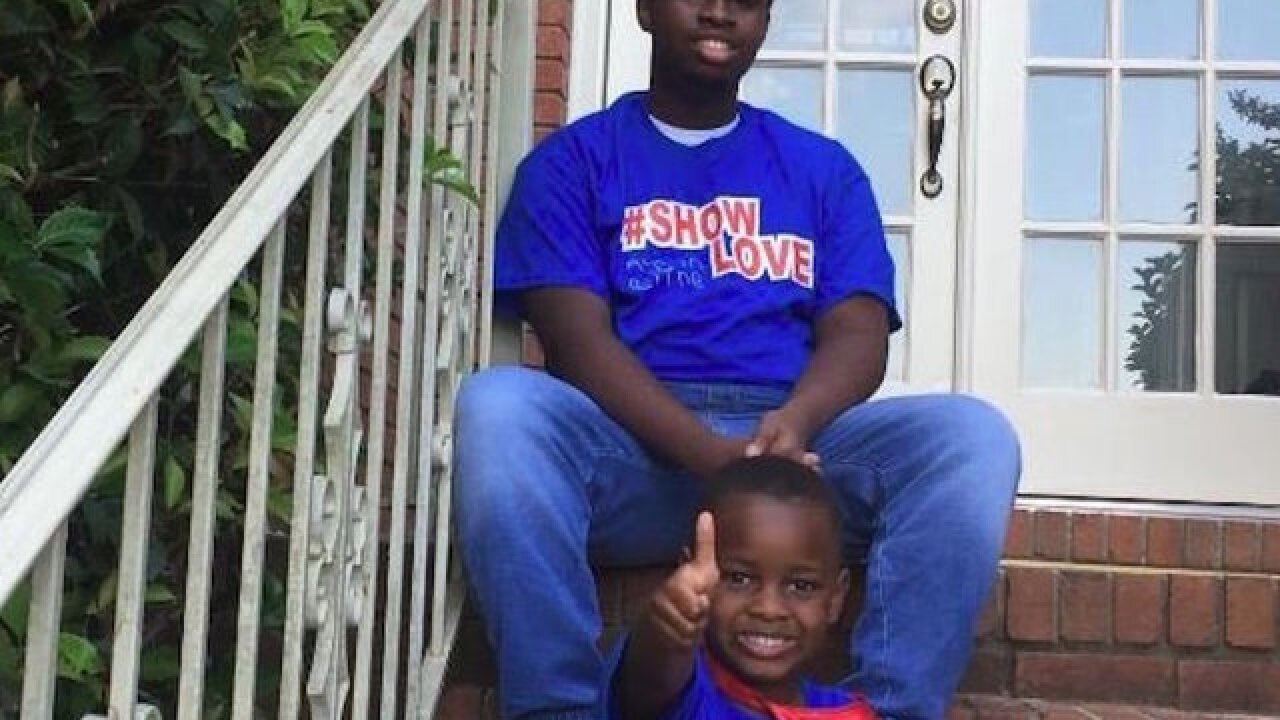 Austin Perine's superhero cape glides and flutters as he hands chicken sandwiches to homeless men outside a shelter in Birmingham, Alabama.

It's a sweltering 95 degrees outside, but at age 4, Austin is undeterred. The red satin cape he wears, he says, makes him go faster. "It blows in the wind," he explains with a smile.

At the shelter, he's quickly met with a merriment of high-fives and pats on the shoulder. Since March, he's become a familiar face to the homeless men and women congregated on the sidewalk outside the Firehouse Ministries' red brick building.

With the help of his dad, TJ Perine, Austin drops off meals on a weekly basis, or as he calls it "giving food and smiles."

"It's because of you that I want to be a better person," a homeless man tells the boy. "You're showing love, everywhere you go, right?"

"I am," responds Austin, handing him a paper-wrapped sandwich and a cold drink.

He's wearing his "work outfit" — all blue — sneakers, shorts and a t-shirt, glitzed up by bright red tights and a cape. The catchphrase "#ShowLove" is emblazoned in bold red letters across his chest.

"Show love means, you care about someone no matter what they look like," he's quick to explain. "Show Love" is his superhero motto, he says.

"He likes being called a superhero," the father explains. "He's his own entity -- 'President Austin.' He doesn't like being called Superman."

Asked what are the pillars of President Austin's agenda, Austin answers without hesitation:

"I would chase the bad guys out of school and feed the homeless."

"Austin is just a compassionate kid," the boy's proud dad says. "He just wants to see everybody happy."

That compassion is centered around Austin's older brother Taylor, 16, who struggles with autism. "He's always been a nurturer of his brother," Perine says. "He's kind of like a little dad to him."

In March, that compassion sparked an emotional response to a baby panda Austin saw on TV.

"Austin and I were watching an animal show and there was a mother panda that was leaving her cubs," recalls Perine. "Austin began to get concerned, and I told him that the panda would be homeless."

Austin didn't know the meaning of the word "homeless."

"And my dad said, it's somebody who doesn't have a home or mom and dad around," he says.

"I wanted it to have a home," Austin says, holding a kid's story book about zoo animals. A panda cub's face takes an entire page and Austin pokes at its nose with his finger. "It's flat," he says giggling.

Putting his plan into action

Wishing to show Austin the meaning of homelessness, Perine took him to see the city shelter.

"He said, 'Can we feed them?" Perine says of that first day at the shelter. "I didn't expect to feed homeless people that day. But when a 4-year-old asks you, what can you say?"

So they headed to Burger King and picked up an order of chicken sandwiches. Austin agreed to use his allowance to buy food instead of a weekly toy.

As word of Austin's mission spread, he became something of a local celebrity, appearing in TV shows, news article and social media posts.

Burger King gave him a $1,000 monthly allowance for a year so he could fulfill his mission, a spokesman for the company said.

Birmingham's mayor, Randall Woodfin, calls him "the City's ambassador." He told CNN that Austin's story "is one of hope."

"It's one of our younger generation that gets it and understands the importance of helping others. And it's one that we all want to cherish and make of importance which is showing love."

"It really brightens our day and warms our heart to see that little superhero cape come up the building and that sweet, sweet voice," says Firehouse Ministries director Anne Rygiel.

The shelter serves about 5,000 men, women and children a year. Most are what she describes as "food insecure."

"That's a lot that we do with very little resources, so we rely heavily in the community," Ryegiel says.

Perine hopes the attention his son has received will have a positive impact on the community.

"We've gotten a lot of support from the country, and what we want to do is expand from more than just giving out sandwiches."

His vision is to build a facility that addresses the many causes of homelessness.

"Mental illness, drug abuse, addiction, and things like that," he says. "Austin and I want to build a facility and get some specialists in there that can actually help these people get back into the workforce."

In the meantime, on any given day, the boy wonder with the flowing cape will make his rounds, spreading smiles, passing out food and reminding all within earshot "don't forget to show love."