23 dead in California's Camp Fire; blaze is most destructive in state's modern history 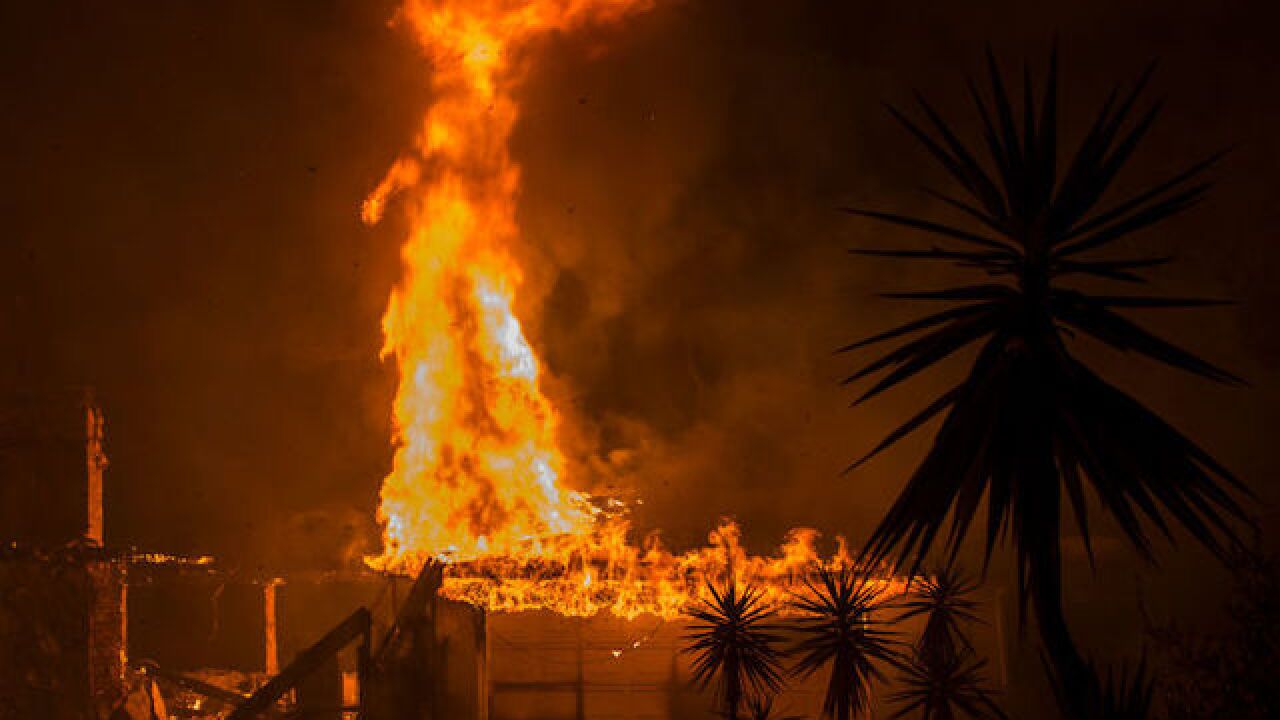 Image copyright 2018 Getty Images. All rights reserved. This material may not be published, broadcast, rewritten, or redistributed.
David McNew
<p>A house burns during the Woolsey Fire on November 9, 2018 in Malibu, California. After a experiencing a mass shooting, residents of Thousand Oaks are threatened by the ignition of two nearby dangerous wildfires, including the Woolsey Fire which has reached the Pacific Coast at Malibu. </p>

The death toll in the Camp Fire in Northern California has risen to 23 with the discovery Saturday of 14 more sets of remains, Butte County Sheriff and Coroner Kory Honea told reporters.

Honea said 10 of the victims were recovered from the fire-ravaged town of Paradise. He said seven people were found in homes, and three were outside. Of the remaining four, two were in cars and two were in houses in other areas.

Saturday brought a break in the fierce winds that have whipped the three major wildfires in California that have destroyed a record number of buildings and displaced more than 300,000 people.

But officials know the gusts will be back Sunday and most evacuation orders remain in place.

"Mother Nature has given us a short reprieve ... but we know tomorrow Mother Nature's gonna turn her fan back on and the winds are going to start blowing," Ventura County Fire Chief Mark Lorenzen told reporters. He said he cautioned his firefighters and the public not to be lulled by the better weather Saturday.

Winds could gust as high as 30 to 40 mph on Sunday, officials said. Much of the state hasn't seen rain in more than a month, according to CNN meteorologists, and the dry vegetation has only served to fuel the fires.

• Burning and growing: The Camp Fire is the largest of the three major fires, swelling to 100,000 acres by Saturday morning, according to the California Department of Forestry and Fire Protection, or Cal Fire. It is the most destructive blaze in the state's modern history. The Woolsey Fire doubled in size overnight, growing to 70,000 acres. The Hill Fire was at 4,500 acres.

• Trump tweets: President Donald Trump blamed the wildfires on the "gross mismanagement of the forests" in a tweet early Saturday. "Remedy now, or no more Fed payments!" he said. In another tweet sent Saturday he wrote: "Our hearts are with those fighting the fires, the 52,000 who have evacuated, and the families of the 11 who have died. The destruction is catastrophic. God bless them all."

• Massive evacuations: Fire officials estimate the number of people forced from their homes statewide is more than 300,000; in Los Angeles County it is 170,000.

• Containment: Firefighters are struggling to put down the flames. The Camp Fire is 20% contained, while the Woolsey Fire is just 5% contained. The Hill Fire was 25% contained.

• Destruction: In Northern California, nearly 7,000 structures have been destroyed, including 80% to 90% of the homes in Paradise, north of Sacramento, according to officials. In Los Angeles and Ventura counties, a significant number of homes were destroyed or damaged, fire officials said.

The Camp Fire has killed at least nine people in Paradise and destroyed 6,453 structures.

The bodies of five people were found in or near a vehicle, and the other four were in or outside a home.

It took just a few hours for the fire to explode in size after breaking out early Thursday morning. Among the communities hit was Paradise, a town about 80 miles north of Sacramento.

Families raced to escape the blaze as it consumed much of the town. Footage captured by evacuees showed flames along roads, scorching trees and devouring houses.

"The flames were whipping and spreading so fast," Whitney Vaughan said after fleeing her home in Paradise . "It began to jump the road. There wasn't anywhere to go."

The town was mostly empty, and the main road littered with downed trees and power lines. Burnt out cars line blackened roadsides, abandoned in the panic and chaos of the evacuations.

"We do intend to rebuild," Paradise Mayor Jody Jones said. "It's going to be a process -- a lot of hard work, a lot of coming together.

An estimated 52,000 people evacuated in Butte County, where Paradise is located.

Fire officials said three firefighters and some civilians were hurt, but details about their injuries were unknown. About 35 people have been reported missing, authorities said.

More than 200,000 people have fled in Ventura County and in Malibu in Los Angeles County due to the Woolsey Fire, officials said.

The fire crossed US 101 a few miles east of Thousand Oaks -- the site of Wednesday night's bar shooting -- and was headed south to the Pacific coast in the direction of Malibu Creek State Park and the city of Malibu, the Los Angeles County Fire Department said.

In Malibu, mandatory evacuations were ordered for the entire city of about 12,000 people that's known for its celebrity beachside homes.

Two people were arrested in looting incidents Friday during the evacuations, according to Ventura County sheriff's Sgt. Eric Buschow.

The howling Santa Ana winds fueled the Woolsey Fire. These are strong, dry winds that high-pressure systems push from east to west, from the mountains and desert areas down into the Los Angeles area.

Fire officials said the winds had temporarily died down Saturday, giving them a brief opportunity to make progress.

"This is just a lull," Los Angeles County Fire Chief Daryl Osby said, "so we're going to take advantage of that and try to get as much line perimeter in as we can with the expectation that we will get more winds tomorrow."

Another round of Santa Ana winds is forecast to whip the area Sunday through Tuesday, though it may be weaker than Friday's.

The Hill Fire is burning near the site of this week's mass shooting in Thousand Oaks.

"It's been a brutal, hellish three days for the city of Thousand Oaks," City Councilwoman Claudia Bill-de la Peña said at a news conference on Saturday.

The fire started Thursday and initially spread quickly, torching 10,000 acres in six hours. But firefighters have made some progress.

Part of the fast-moving blaze was burning into the footprint of a 2013 wildfire, which could slow its spread, chief Lorenzen said.

No houses or businesses have been lost, but a number of RVs and outbuildings have been burned, and a firefighter suffered a minor injury, authorities said.