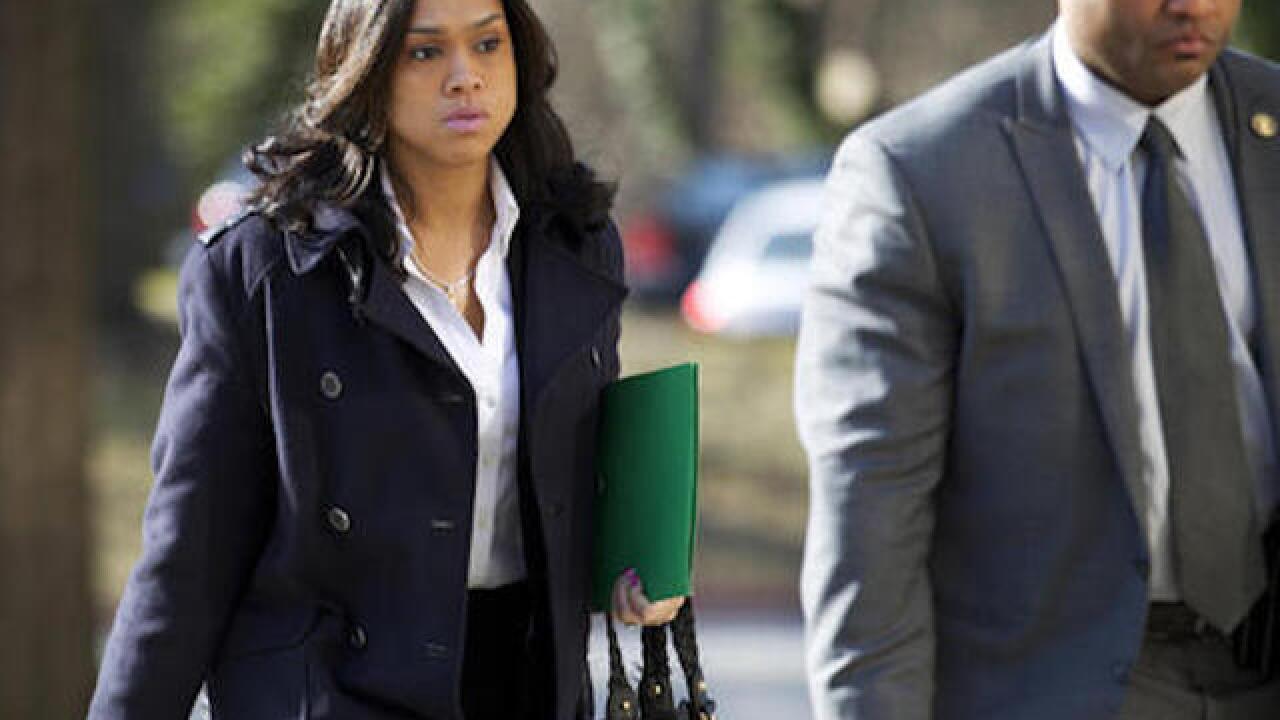 BALTIMORE (AP) — After two trials and no convictions, Baltimore's top prosecutor faces criticism that she moved too quickly to file charges against six officers in the case involving a 25-year-old black man who died a week after he was critically injured in police custody, triggering protests and riots a year ago.

Even the judge overseeing the cases — in his verdict Monday acquitting the latest officer to stand trial in the death of Freddie Gray — said the state failed to prove its case on any of the charges.

Gray died on April 19, 2015, a week after his neck was broken while handcuffed, shackled, but left unrestrained by a seat belt in the back of a police van. The circumstances of his arrest and his death triggered protests demanding justice for Gray. On the day of his funeral, rioting and looting broke out. The National Guard responded, and a curfew was imposed.

Nero, 30, who is white, was the second of six officers charged to stand trial. The manslaughter case against Officer William Porter ended in a mistrial when the jury deadlocked. Prosecutors plan to retry him in September.

Williams delivered his verdict in the racially charged case before a packed courtroom Monday. Nero's parents and his brother sat in the front row; a few rows away, Gray's stepfather. Noticeably absent, however, was State's Attorney Marilyn Mosby, who was present when Williams declared a mistrial in the trial for Porter in December.

After announcing charges against the officers last May — one day after receiving the police department's investigation while a tense city was still under curfew — Mosby did not shy from the spotlight. She posed for magazine photos, sat for TV interviews and even appeared onstage at a Prince concert in Gray's honor.

After the acquittal, Nero's lawyers sought to send a strong message to her.

"Officer Edward Nero, his wife and family are elated that this nightmare is finally over," wrote Marc Zayon and Allison Levine in a statement. "The state's attorney for Baltimore city rushed to charge him, as well as the other five officers, completely disregarding the facts of the case and the applicable law. His hope is that the state's attorney will reevaluate the remaining five officers' cases and dismiss their charges."

David Weinstein, a Florida attorney and former federal civil rights prosecutor, said the verdict will probably serve as a "wake-up call" for prosecutors.

"This speaks to the notion a lot of people had when this first happened, which is that it was a rush to judgment," Weinstein said. "The state's attorney was trying to balance what she had with the public outcry and call to action given the climate in Baltimore and across the U.S. concerning policing, and I think she was overreaching."

Harvard University professor Alan Dershowitz said he believed the judge's verdict was an example of the legal system looking at the facts of the case without being influenced by race or community pressure. He said he "absolutely" believed Mosby overreached in bringing charges against the six officers.

"There's no question she acted irresponsibly," Dershowitz said in a telephone interview. "She acted politically. She acted too quickly, and the public ought to make her pay a price for seeking to distort justice."

Although the judge's ruling referred specifically to Nero's case — the other officers will be tried separately for their alleged roles — he rejected nearly every claim the state made at trial, repeatedly telling prosecutors they'd failed to prove any of the counts beyond a reasonable doubt.

Prosecutors had argued that Nero and colleague Garrett Miller illegally detained and arrested Gray without probable cause, and that Nero was reckless when he failed to buckle Gray into a seat belt during the van's second stop blocks from the arrest. Zayon argued Nero wasn't involved in Gray's arrest, having only arrived after Gray was in handcuffs. As for the seat belt, Zayon said not only was Nero unaware of a newly revised policy requiring officers to buckle in prisoners — the previous policy gave officers discretion based on circumstances — but that it was the van driver's responsibility to make sure Gray was safe.

In his verdict, Williams said he believed Miller, who took the stand as the state's principal witness and testified that he alone detained and handcuffed Gray. The judge told prosecutors they failed to prove Nero did anything wrong.

"The state's theory from the beginning has been one of negligence, recklessness, and disregard for duty and orders by this defendant," Williams said. "There has been no information presented at this trial that the defendant intended for any crime to happen."

Warren Brown, a Baltimore attorney who observed much of Nero's trial, said the verdict proved how thin the state's cases are against the officers.

"It was clearly a case where the state decided that come hell or high water they were going to prosecute Nero and Miller, and I think that the ridiculous prosecution was borne out," Brown said. "This thing may extend on and on, quite frankly. It's the prosecution that keeps on giving."

Trial No. 3 — that of van driver Caesar Goodson, who prosecutors believe is most culpable in Gray's death — is set to begin in two weeks. He is charged with second-degree murder.