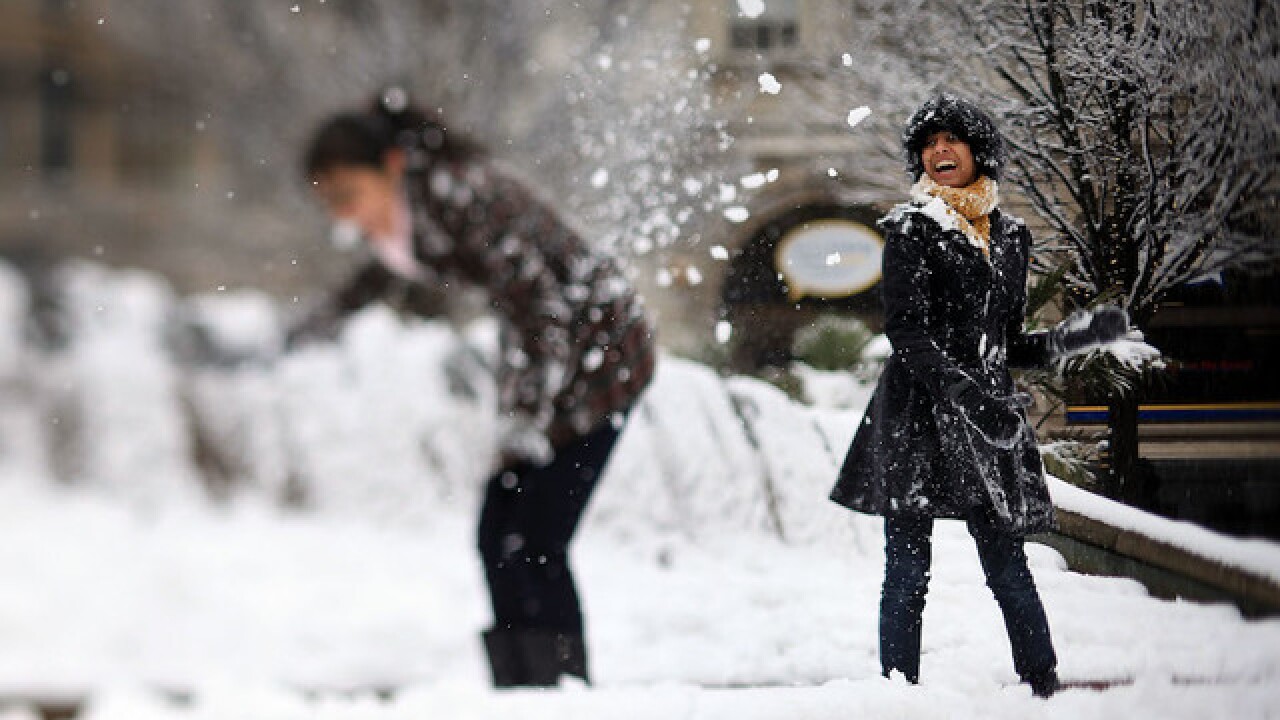 Image copyright 2018 Getty Images. All rights reserved. This material may not be published, broadcast, rewritten, or redistributed.
Christopher Furlong
<p>A member of the public makes their way across a snow covered Gas Street Canal Basin on January 13, 2010 in Birmingham, England. Fresh snowfall has been affecting many parts of the UK as very cold conditions continue to dominate the country's weather. The MET Office has issued weather warnings for Wales, Southern England, north-west England and the West Midlands. Many road, rail and air passengers are again facing severe delays to their journeys.</p>

From making snow angels to picking snowball fights with your friends, playing in the snow can be a lot of fun.

But one Colorado town didn't think so. In Severance, a town about 60 miles north of Denver, it's long been illegal to throw snowballs.

Dane Best, 9, thought the law was "silly." The young town resident might have even broken it once in a while.

So with the help of his classmates, Best decided to take it upon himself to change the law. He collected letters and signatures in support of snowball fights, did some research and presented his case at a Severance Town Council meeting on Monday.

"It is an outdated law," Best told council members, according to CNN affiliate KCNC. "And I want to throw a snowball without getting in trouble."

Now he can, after the council unanimously approved a measure to legalize throwing snowballs within town limits.

Mayor Don McLeod told CNN that the law was part of a more elaborate ordinance, Sec. 10-5-80, that said, "It is unlawful for any person to throw or shoot any stone or any other missile upon or at any person, animal, building, tree or other public or private property; or at or against any vehicle or equipment design for the transportation of persons or property."

When Dane and his classmates visited town hall this fall on a field trip, McLeod pointed out that the law -- although it's not enforced -- would include throwing snowballs at people.

"The kids were super intrigued when they found out they have been breaking the law this whole time," the mayor told CNN.

"Every year when the kiddos come to town hall, I point out little laws we have, and I challenge these third-graders to change them. Dane was the first student to take me up on this, and I'm very proud that he did."

After winning his argument, Dane was given the town's first legal snowball to throw in celebration. His parents couldn't be more excited.

"We are proud of him for taking initiative to make some change, no matter how small it may be," Derrick Best, Dane's father, told KCNC. CNN has reached out to Dane's parents for further comment.

As for Dane's next challenge? According to KCNC, another current town law allows a maximum of three pets per household and only includes cats and dogs. So Dane plans to launch a campaign on behalf of his (illegal) pet guinea pig.