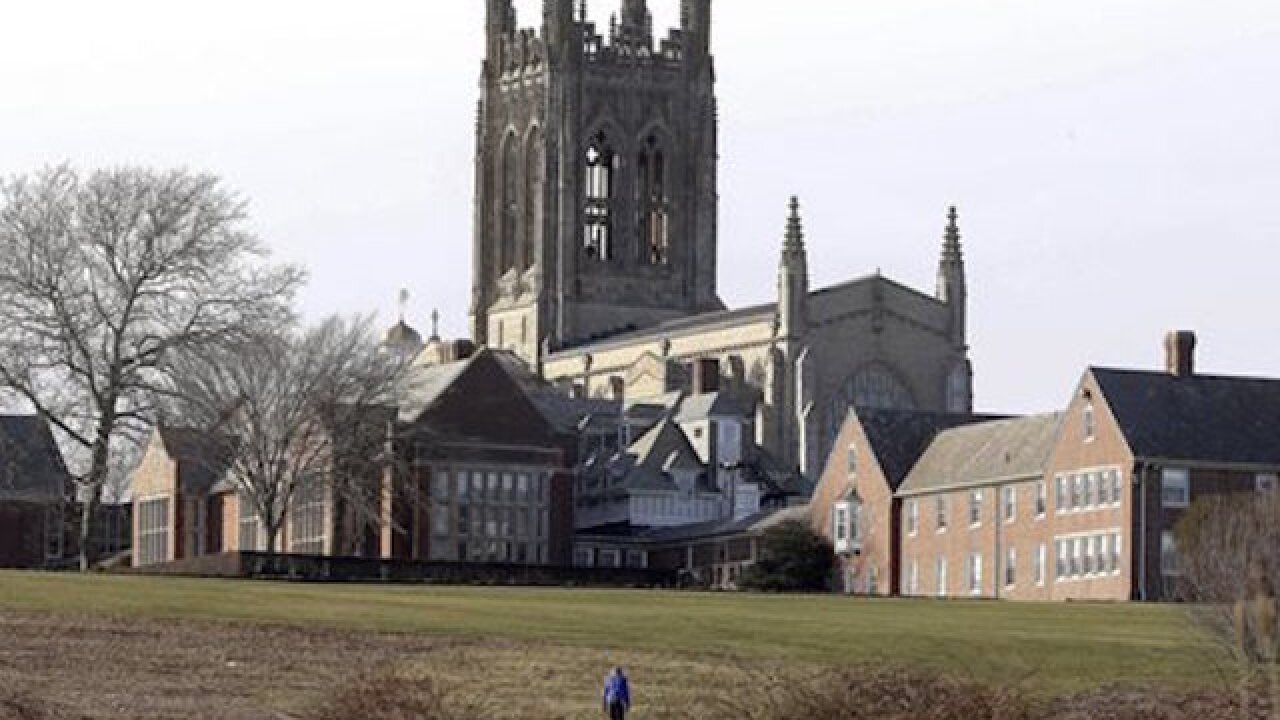 Copyright Associated Press
Steven Senne
<p>In this Jan. 7, 2016 file photo, buildings at St. George's School sit on a hill in Middletown, R.I. Rhode Island state police wonít release their report into dozens of sexual abuse allegations at a prestigious boarding school because the matter is being investigated in other states. The investigation into allegations of abuse of students at St. Georgeís School concluded in June with no criminal charges. (AP Photo/Steven Senne, File)</p>

PROVIDENCE, R.I. (AP) — St. George's School has agreed to a settlement that would provide compensation for up to 30 former students who say they were sexually abused, the elite Rhode Island boarding school announced Wednesday.

The Middletown school announced the pact in a joint statement with a group representing sex abuse victims, saying the institution will provide an undisclosed sum to settle the claims. Paul Finn, a mediator who also worked on the clergy sex abuse settlement in Boston, will determine how much each person will receive.

Katie Wales Lovkay told the headmaster in 1979 that an athletic trainer abused her, but he sent her to the school therapist and did not report it to authorities. A week before her 1980 graduation, she was expelled.

"This was never about the money. This was about being heard, and St. George's realized that what they have done to us in the past is completely wrong," Lovkay said. "It's nice to know it's done, it's over."

Dozens of people have come forward to say they were abused by teachers and staff at the school as far back as the 1970s and as recently as the 2000s. The school itself acknowledged it did not report the abuse to authorities. In some cases, administrators did not believe the reports of abuse. In others, staffers accused of abuse were forced out but went on to teaching positions in other schools.

A state police investigation concluded earlier this year with no criminal charges. An independent investigation agreed to by the school and victims has been underway for months, and a report is expected in the coming weeks.

Anne Scott, who leads the victims' group SGS for Healing and who attended the mediation, said she was grateful to the board of trustees.

"St. George's has done something meaningful and important for survivors," she said in a news release. "It's hard to put into words what it feels like to receive this kind of validation and support, after all these years. Our spirits are renewed on our forward healing journey."

Leslie Heaney, chair of the school's board of trustees, said board members hope the agreement will assist victims as they move toward healing.

"We look forward to continuing to work with our survivor community so that the lessons learned can ensure the safety of our current and future generations of St. George's students," she said.

Eric MacLeish, a Cambridge, Massachusetts, attorney who represents the victims, would not disclose the financial terms of the settlement. He said the majority of the victims were abused at the school in the 1970s and 1980s.

MacLeish said Finn will apportion the money based on the impact the abuse had on the victims.

"To give them this news — people have been in tears," MacLeish said. "People feel like this is the school recognizing what they went through. Something terrible happened to them, and the school is now saying, 'We're sorry that this happened, that it occurred at our school, and we want to recognize the harm that occurred, and we want to do something about it.'"

MacLeish said the money does not represent justice, but validation.

"So many of these people thought they were the only ones," he said. "Many of them felt guilty. They thought it was their fault. Many had difficulties with trust, intimacy, even feeling that the abuse was their fault. We had a large group of people who did not tell anybody about their abuse, even their spouses."