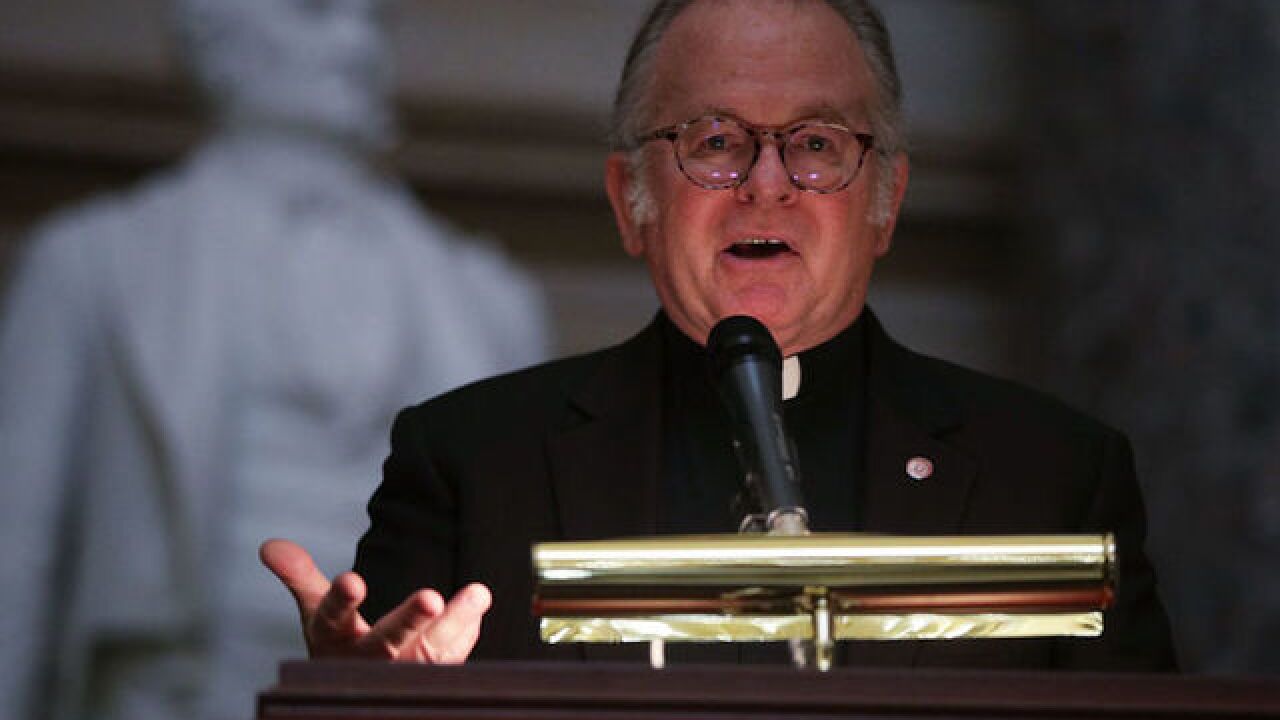 Copyright Getty Images
Alex Wong
<p>WASHINGTON, DC - SEPTEMBER 27: The US House Chaplain, Father Pat Conroy, speaks during a memorial service at the National Statuary Hall of the Capitol September 27, 2017 in Washington, DC. The Association of Former Members of Congress held a memorial service honoring those members who have passed away in the past 18 months. (Photo by Alex Wong/Getty Images)</p>

The Rev. Pat Conroy, the chaplain at the US House of Representatives, has rescinded his resignation in a letter, obtained by CNN, following a week's worth of lawmakers from both parties questioning House Speaker Paul Ryan's request that Conroy step down.

"At this time, and upon advice of counsel, I herby retract and rescind said resignation for the reasons that follow," Conroy writes in the letter dated Thursday and addressed to Ryan.

Conroy, a Jesuit priest, resigned April 15 after he spent nearly seven years praying at the outset of House sessions. He wrote two versions of his resignation letter, which were also obtained by CNN from a congressional source. In the first version, he wrote that Ryan, who is Catholic, should consult with his chief of staff on a resignation date, but the second version stated his last day would be May 24.

Speaker Paul Ryan reinstated the House chaplain after he sent a letter declaring he’d fight to retain the position https://t.co/anAuv3ZLqW

The Washington Post first reported that Conroy rescinded his resignation.

In the letter, he addressed speculation that lawmakers wanted a chaplain who wasn't Catholic.

"While you never spoke with me in person, nor did you send me any correspondence, on Friday, April 13, 2018 your Chief of Staff, Jonathon Burks, came to me and informed me that you were asking for my letter of resignation," he said in the letter. "I inquired as to whether or not it was 'for cause,' and Mr. Burks mentioned dismissively something like, 'maybe it's time that we had a Chaplain that wasn't a Catholic.'"

He continued: "At that point, I thought that I had little choice but to resign, as my assumption was that you had the absolute prerogative and authority to end my term as House chaplain."

Rep. Gerry Connolly, a Virginia Democrat who is Catholic, has been among the most vocal critics of the request for Conroy to step down.

"The letter is a bombshell, inside that bombshell are explosive items like Ryan's chief of staff actually said to him maybe it's a time for a non Catholic chaplain -- for Catholics that is a profoundly offensive comment," Connolly told CNN in a phone interview. "The more this festers, the uglier it gets and the wider this infection. I think Paul Ryan should see the letter as an opportunity to heal rather than pouring salt on an open wound."

Connolly, who sent a letter with Jones to Ryan requesting more information on the resignation, said he spoke to Conroy before he wrote the letter and submitted it.

Lawmakers from both parties were lobbied Ryan to take steps to rescind his request.

Republican Rep. Walter Jones of North Carolina asked Ryan to reinstate Conroy on Wednesday, saying in a letter he believes the way the House chaplain was let go reflected "poorly on the House" and appears "intentionally underhanded."

"Not only was I dismayed that Father Conroy was apparently asked to resign without explanation, I was troubled by the manner in which it was done. All members were not asked for their opinions on the chaplain's performance," Jones said in the letter. "Instead, it appears a decision to push him out was made behind closed doors based on the input of only a few."

The letter continued: "It appears the decision was made to minimize the input of members, and executed surreptitiously to overcome what was likely to be their overwhelming objection. It appears intentionally underhanded, and that is deeply disappointing!"

According to a person who attended last week's GOP conference meeting, the speaker explained that he asked Conroy to resign "based on member feedback about pastoral care."

A separate GOP member who attended the meeting said Ryan "didn't say this as bluntly but the reason for the change is that many of us like Father Conroy but we feel like he didn't do anything. We never see him. We never hear from him. We'd like to have a more active priest/pastor."