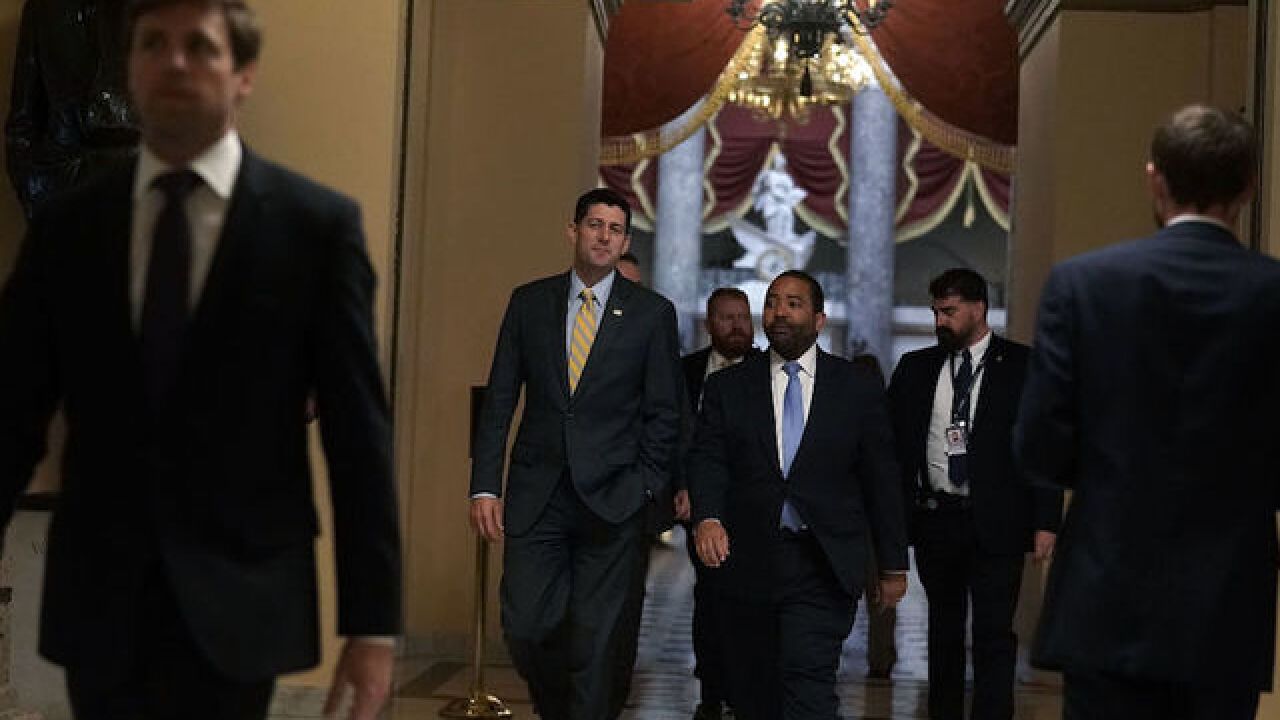 Image copyright 2018 Getty Images. All rights reserved. This material may not be published, broadcast, rewritten, or redistributed.
Alex Wong
<p>U.S. Speaker of the House Rep. Paul Ryan passes through a hallway at the U.S. Capitol prior to a vote June 21, 2018 in Washington, DC. Due to the defeat of a conservative immigration bill today, House Republican leaders have postponed a vote on a compromise immigration proposal until tomorrow. </p>

House Republicans will push ahead this week with a vote on their own compromise immigration bill that still faces long odds in the chamber despite last-minute delays and a rush to make changes.

Over the weekend, aides and members worked to see if they might be able to include a provision to expand E-verify, a program the US government uses to check the immigration status of workers, as well as a guest worker visa program. But, there was little evidence that the changes would be enough to get the bill passed.

House Republicans seemed to be losing momentum late last week after President Donald Trump tweeted Friday that he thought the House GOP conference should wait to address immigration until after the midterms and stop "wasting their time."

The reality for the House conference -- and Republican lawmakers in general -- is that the politics of immigration have not changed. Long an issue that has revealed partisan schisms within their ranks, Republicans are still at odds. Moderates back a path to citizenship for individuals who were brought to the US illegally as children. Conservatives have been wary of signing onto anything that can be construed by their base as "amnesty." And, that's just the beginning. Divisions over legal immigration numbers, guest worker programs and even E-verify have crippled the party from solving the problem countless times before.

"Republicans should stop wasting their time on Immigration until after we elect more Senators and Congressmen/women in November. Dems are just playing games, have no intention of doing anything to solves this decades old problem. We can pass great legislation after the Red Wave!" Trump tweeted.

Trump's inconsistent support was weighing on members. On Tuesday, Trump visited the House conference on Capitol Hill to tell them he backed them "100%." But despite an all-out lobbying blitz from the administration Wednesday to pass the bill, Trump's support was waning, and by the end of the week, playing into conservatives' worst fear that Trump wouldn't be able to shield them from critics of the bill.

"What I would like is for the President to have the same message," said Rep. Mike Coffman, a Republican from Colorado who faces a tough re-election in a swing district. "The message that he had when he talked to us behind closed doors versus the message in terms of talking to the American people."

Rep. Greg Walden, a Republican from Oregon, told reporters the tweet was "a bit of a surprise."

"The best way to pass legislation is to consistently support a position," Walden added later.

Pressed if the President was doing that, Walden said "I'll leave it at that."

Over the weekend, Trump visited Nevada where he once again made his tough-on-borders message a centerpiece of his stump speech. But the President didn't push for lawmakers already in Congress to act in the House. Instead, Trump warned about the danger of softening his stance on immigration.

"If they see any weakness, they will come by the millions," Trump said at the rally.

Republicans were supposed to have already voted on their immigration proposal last week, but in a last-minute decision, leaders chose to hold off in hopes that a last-minute negotiation would inch them closer to passage.

Deputy Majority Whip Patrick McHenry, a North Carolina Republican and one of the top vote counters in the GOP, was blunt about the prospects for a different outcome, telling reporters that the politics of immigration was "the same as it ever was" Friday.

For leadership, the entire exercise of trying to solve immigration just five months ahead of the midterm elections was never their choice. The scrambling to find a compromise was the result of a push from House moderates. Members had threatened to force a vote on the House floor using a rarely deployed discharge petition, a procedure that would have forced a floor vote for a package of bills that included some that leadership didn't support. That triggered a rapid response to neutralize the discharge petition and negotiate on immigration -- an issue that hadn't been addressed comprehensively since the late 1980s.

But as part of the push to find a compromise and appease moderates, leaders also had to agree to put a conservative immigration bill -- commonly shorthanded around Capitol Hill as the Goodlatte bill for author Rep. Bob Goodlatte of Virginia, on the floor. On Thursday, that bill earned 193 votes, more than expected, but still short of the necessary votes to pass.

Asked why Republicans did not just stop wasting their time after Trump's tweet, McHenry responded "that's a very good question."

He then added "votes were pledged in order to turn off the discharge petition."

"There was a pledge that was made and the intention is to fulfill it," he said.

Over the weekend, the Trump administration issued guidance for how families might be reunited on the Southern border. There are still more than 2,000 children in the Department of Health and Human services' custody. In the Senate, a bipartisan group of lawmakers is seeking their own narrow legislative option to more permanently end family separations, but those negotiations are ongoing.

Senate Homeland Security Chairman Ron Johnson, a Republican from Wisconsin, told CNN's Jake Tapper on Sunday that he would continue to deploy oversight to make sure that children and families were reunited, but Johnson noted that there were issues under the Obama administration with keeping track of children in the Department of Health and Human services custody as well. Asked if he was confident the Trump administration could unite the families that are still separated, Johnson said "they are saying they do."

"We will continue our oversight on that," Johnson said.