North Korea: We won't abandon nukes with US gun to our head 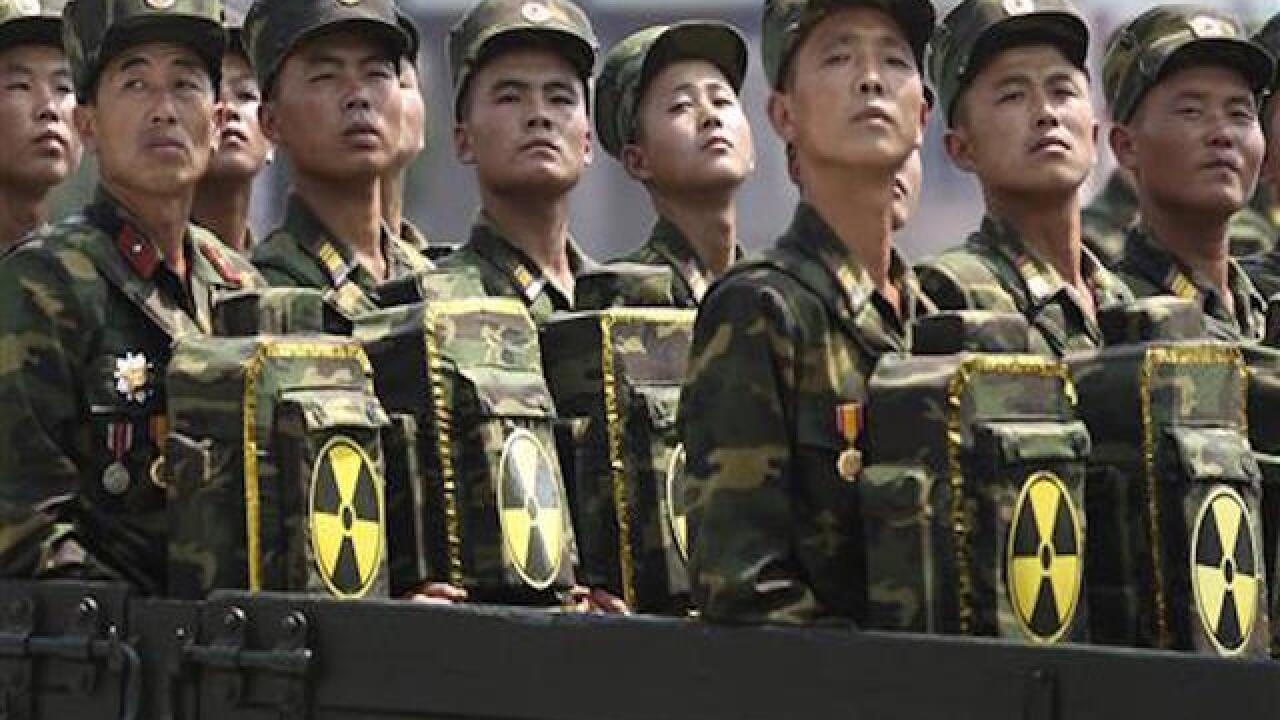 PYONGYANG, North Korea (AP) — The top North Korean official for U.S. relations told The Associated Press on Friday that his country is now a nuclear threat to be reckoned with, and Washington can expect more nuclear tests and missile launches like the ones earlier this week as long as it attempts to force his government's collapse through a policy of pressure and punishment.

"It's the United States that caused this issue," Han Song Ryol, director-general of the department of U.S. affairs at North Korea's Foreign Ministry, said in his first interview with an American news organization since assuming the post three years ago. "They have to stop their military threats, sanctions and economic pressure. Without doing so, it's like they are telling us to reconcile while they are putting a gun to our forehead."

Han defended the North's test-launching on Wednesday of two medium-range ballistic missiles. Foreign military experts believe that, once perfected, such missiles could deliver nuclear warheads to U.S. bases in Japan and possibly to major U.S. military installations as far away as the Pacific island of Guam, where long-range U.S. Air Force bombers are deployed.

The tests indicate technological advances in the North's missile capabilities. They were quickly condemned by Washington, Tokyo and Seoul as a "provocation" and a violation of United Nations resolutions.

Han dismissed the criticism, saying North Korea has no choice but to build up its military deterrent as long as the world's largest superpower — and the country that first developed nuclear weapons — remains an enemy. He noted that the U.S. recently deployed nuclear-powered submarines and strategic bombers capable of dropping nuclear weapons on North Korea to the region, and earlier this year conducted training for precision airstrikes on North Korea's leadership, along with simulations of an advance into the capital, Pyongyang, with the South Korean military during joint annual exercises.

"This launch was a significant and novel step that my country must take to produce a powerful nuclear deterrent," Han said. "The real provocation is coming from the United States. ... How can my country stand by and do nothing?"

Han said North Korea has never recognized a longstanding United Nations Security Council ban on its testing of nuclear weapons or long-range missiles, though the world body has ratified the resolutions and imposed heavy sanctions on North Korea for continuing them — including a round of new sanctions imposed after its latest nuclear test in January. North Korea says that test was its first of an H-bomb.

He held out the possibility of dialogue with the United States, but only if Washington agrees to "drop its hostile policies," replace the armistice that ended the 1950-53 Korean War with a lasting peace treaty, and withdraw its troops based in South Korea.

None of those proposals is new. North Korea has repeated them for years, but they have gotten virtually no traction in the U.S., which has instead stood by its own demand that North Korea show a willingness to give up its nuclear program before any meaningful talks can begin.

Han, who formerly served at North Korea's United Nations mission and lived in New York, said it would require "political resolve" in Washington to change its policies toward North Korea. "There are many measures that the United States can take," he said. In response, he said, North Korea is willing to follow suit, regardless of what has happened in the past.

But until that happens, he said, there are "clouds of nuclear war" on the Korean Peninsula.

Han said North Korea has only grown stronger under the "strategic patience" policy of the Obama administration, which focuses on sanctions and military pressure to weaken and isolate North Korea and has brought talks between the two countries to a virtual standstill. The policy was initiated after North Korea conducted its second nuclear test in 2009. It has conducted two more nuclear tests since then and launched rockets that carried satellites into orbit, but which share technologies that could be used to produce rockets with warheads to strike the U.S. mainland.

"Day by day our country is becoming stronger, especially the military capacity," he said. "It is natural that many Americans, including the critics, say that strategic patience is a failure. It gave a lot of time to my country to strengthen. So if the United States does not change its policy, which is based on the collapse and overturn of my country, without accepting it as a nuclear state, any policies in the future are fated to fail as well."

He said he is not optimistic the election of a new U.S. president in November will bring much change.

"Since the founding of our country the United States has refused to accept our country as a sovereign state," he said. "My country will be focusing on the new administration. But we don't think it will change its policy, so we are preparing ourselves to deal with its policy to overturn our country ... I can see dark clouds hanging over the sky of the Korean Peninsula."

He said that as long as those dark clouds remain, Washington can expect more nuclear tests and missile launches.