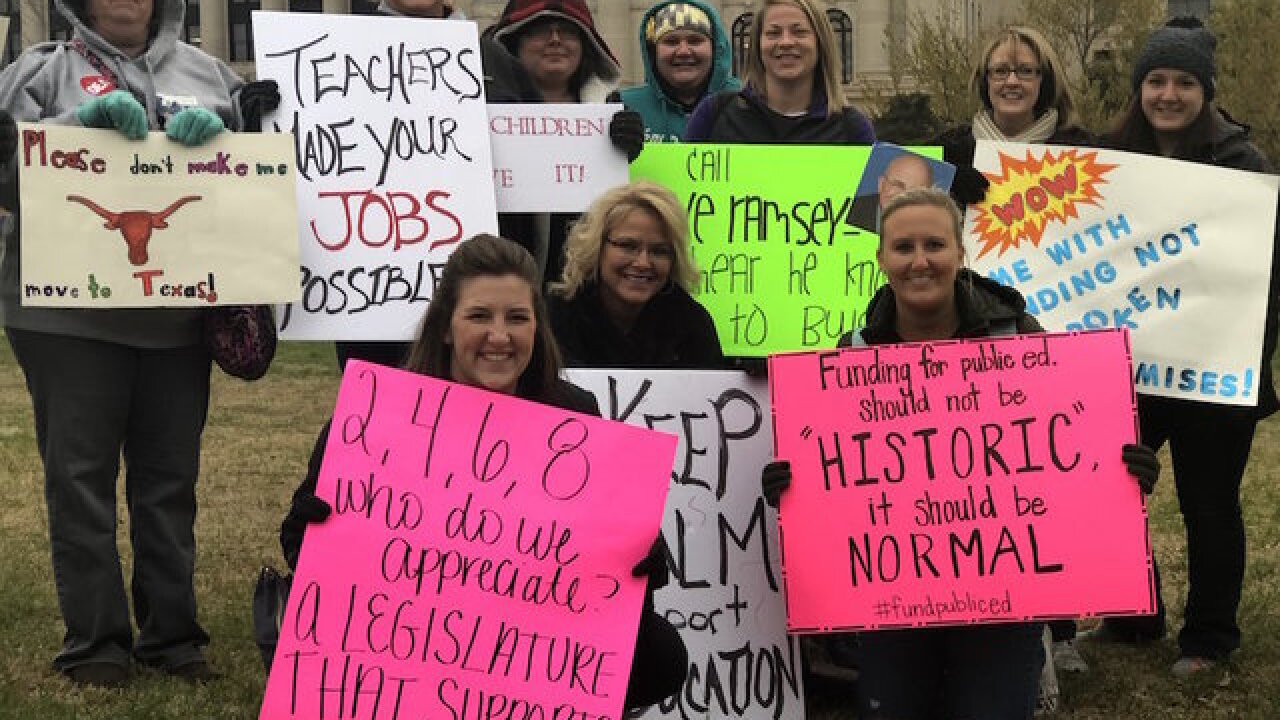 © 2018 Cable News Network, Inc.
CNN
<p>Tens of thousands of Kentucky and Oklahoma teachers were ditching classrooms on April 2, 2018 to rally at their state capitals, demanding more education funding for students.</p>

Oklahoma teachers will continue their walkout for a sixth day Monday, maintaining their pressure on state legislators for increased education funding.

The teachers were granted a pay raise last month but say the state's school facilities, equipment and textbooks are rundown, outdated or in short supply and more spending is needed.

At least 58 of the state's 500-plus school districts -- including those in Oklahoma City and Tulsa -- will be closed Monday because of the walkout, CNN affiliate KOCO reported.

Before the walkout can end, the Legislature must pass a bill ending the state's capital gains tax deduction and the governor must veto the repeal of a hotel-motel tax bill, Oklahoma Education Association President Alicia Priest told reporters Friday.

Meantime, more than 100 women attorneys are marching to the state Capitol Monday calling for a resolution to the conflict.

March organizer Becki Murphy -- an adoption attorney from Tulsa who shared the idea in a Facebook group for female lawyers called Girl Attorney -- said the teachers' action was affecting mothers' ability to work.

Murphy said that the women of Girl Attorney are not taking a political stance but rather wanted to help both sides come up with a solution that considers everyone's best interest.

The coalition is setting up group appointments with lawmakers to hear their concerns and talking to educators about what they feel is needed for Oklahoma's public school system to flourish.

1. The Senate approved a bill amendment Friday that would require third-party retailers selling though internet outlets such as Amazon to collect sales tax from customers or inform them how much they owe in sales taxes. The House approved it earlier in the week. The bill could bring in about $20 million annually in education funding. Teachers say $200 million over three years is needed.

2. The Senate approved a "ball and dice" tax for gambling Friday. Senate leaders are saying it will not add any income to this year's education funding but Priest, speaking at the news conference, said it would help in the long run.

3. The Senate followed the House's lead and repealed a hotel and motel tax as part of Bill 1010XX. This action removes around $43 million from the education funding bill. Senators claim that they can make up that shortage through other revenue in the bill.

The Oklahoma Education Association says the motel tax, which it says would be paid by mostly nonresidents of the state, would add millions in revenue and opposes its repeal.

The educators and state government are at odds over salaries and funding. Gov. Mary Fallin recently signed a bill that raises the average teacher salary by $6,100, but the teachers' union wanted that figure to be $10,000.

The state has ranked 49th in the nation in teacher salaries, according to the National Education Association, in a list that includes Washington, D.C. Only Mississippi and South Dakota rank lower than Oklahoma.

Fallin also signed a bill that raises education funding -- money for textbooks and the state-aid formula -- next fiscal year by $50 million; the teachers' union wanted that number to be higher.

The Oklahoma protesters join teachers from Kentucky, Arizona and other states who have been fighting for better pay, education funding and working conditions. In West Virginia, teachers got a pay raise last month after going on an unprecedented nine-day strike.

In Kentucky, teachers also protested in their state Capitol last week, upset by the passing of a controversial pension bill.

The bill would affect new teachers and move them to a hybrid cash-balance plan rather than traditional pensions, and would limit new sick days that teachers can put toward their retirement. Senate Bill 151 is now at Gov. Matt Bevin's desk. Supporters of the bill said the changes are necessary to save the state's pension systems.

An analysis of that bill by the Institute on Taxation and Economic Policy found that the measure would bring a huge tax cut for the richest 1% of residents, while the biggest tax increase would affect those making less than $21,000 a year. A fellow with the Kentucky Center for Economic Policy described it as "a tax cut for Kentucky's richest people paired with a tax increase for the middle class and the poor."

Bevin has until legislators return to session April 13 to sign the bill.

The Kentucky Educators Association has urged its members to return to their classrooms until then.

"Our students need us to show up for them in classrooms and schools. We urge educators statewide not to allow our united efforts to be compromised by continued calls for action that deprive students, parents and communities of the educational services we provide," it said in a statement posted to Facebook Saturday .

It urged people to wear red Monday to demonstrate their support for public schools.