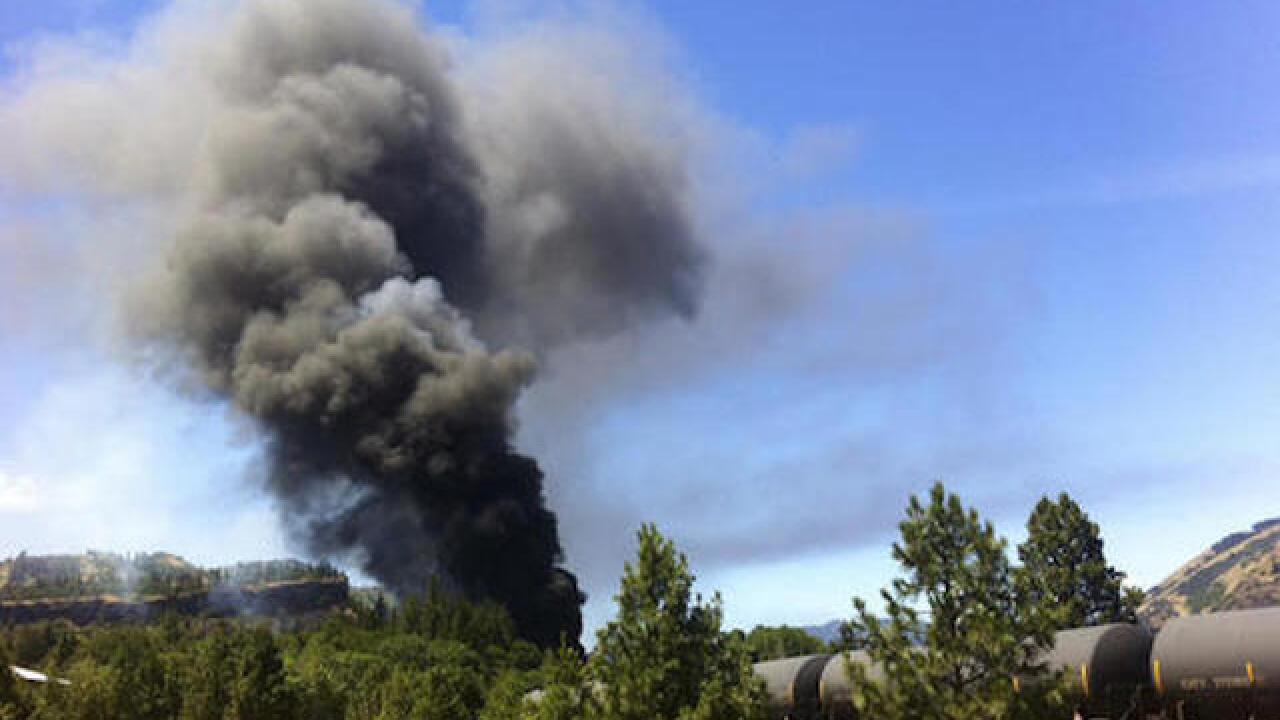 Copyright Associated Press
Mark B. Gibson
<p>A train towing cars full of oil sends up a plume of smoke after derailing Friday, June 3, 2016, near Mosier, Ore., by the scenic Columbia River Gorge. The accident happened just after noon about 70 miles east of Portland. It involved multiple cars filled with oil, and one was burning. Highway 84 was closed for a quarter-mile near the site, and the radius for evacuations was a half-mile. (Mark B. Gibson/The Dalles Chronicle via AP) MANDATORY CREDIT</p>

PORTLAND, Ore. (AP) — A train towing a highly volatile type of oil derailed Friday in Oregon's scenic Columbia River Gorge, igniting a fire that sent a plume of black smoke high into the sky and spurring evacuations and road closures.

Eleven cars derailed in the 96-car Union Pacific train and at least one ignited, releasing oil alongside tracks that parallel the region's treasured Columbia River, said Aaron Hunt, a spokesman for the railroad. All the cars were carrying Bakken oil, a type of oil that is more flammable because it has a higher gas content and vapor pressure and lower flash point than other varieties.

The accident immediately drew reaction from environmentalists who said oil should not be transported by rail, particularly along a river that is a hub of recreation and commerce.

"Moving oil by rail constantly puts our communities and environment at risk," said Jared Margolis, an attorney at the Center for Biological Diversity in Eugene, Oregon.

It wasn't immediately clear if oil had seeped into the river or what had caused the derailment. Hunt did not know how fast the train was traveling at the time, but witnesses said it was going slowly as it passed the town of Mosier, Oregon, about 70 miles east of Portland.

Response teams were using a drone to assess the damage, said Katherine Santini, a spokeswoman with the U.S. Forest Service.

Officials in Mosier closed about 23 miles of Interstate 84 and evacuated a half-mile radius around the spill, including 200 school children who were picked up by their parents. No injuries were reported.

Silas Bleakley was working at his restaurant in Mosier when the train derailed.

"You could feel it through the ground. It was more of a feeling than a noise," he told The Associated Press as smoke billowed from the tankers.

Bleakley said he went outside, saw the smoke and got in his truck and drove about 2,000 feet to a bridge that crosses the railroad tracks.

There, he said he saw tanker cars "accordioned" across the tracks.

Another witness, Brian Shurton, was watching the train as it passed by the town when he heard a tremendous noise.

"All of a sudden, I heard 'Bang! Bang! Bang!' like dominoes," he told The Associated Press.

He also drove to the overpass and saw the cars flipped over before a fire started and he called 911.

"The train wasn't going very fast. It would have been worse if it had been faster," said Shurton, who runs a wind surfing business in nearby Hood River.

Matt Lehner, a spokesman from the Federal Railroad Administration, said a team of investigators had arrived at the scene from Vancouver, Washington.

Union Pacific said 11 cars had derailed, but a spokesman from the Oregon Department of Forestry, which helped extinguish the blaze, said 12 cars had been involved. The discrepancy could not immediately be resolved.

Including Friday's accident, at least 26 oil trains have been involved in major fires or derailments during the past decade in the U.S. and Canada, according to Associated Press analysis of accident records from the two countries.

The worst was a 2013 derailment that killed 47 people in Lac-Megantic, Quebec. Damage from that accident has been estimated at $1.2 billion or higher.

At least 12 of the oil trains that derailed were carrying crude from the Northern Plains' Bakken region — fuel that is known for being highly volatile. Of those, eight resulted in fires.

Since last spring, North Dakota regulators have required companies to treat oil before it's shipped by rail to make it less combustible.

A May 2015 derailment near Heimdal, North Dakota, involved cars carrying oil that had been treated to reduce the volatility, but the crude still ignited. At least one train wreck involving treated Bakken oil did not result in a fire, when 22 cars derailed and 35,000 gallons of oil spilled near Culbertson, Montana, last July.

Reducing the explosiveness of the crude moved by rail was not supposed to be a cure-all to prevent accidents. Department of Transportation rules imposed last year require companies to use stronger tank cars that are better able to withstand derailments.

But tens of thousands of outdated tank cars that are prone to split open during accidents remain in use.

It's expected to take years for them to be retrofitted or replaced.

Hunt, the Union Pacific spokesman, did not respond to questions about whether the Bakken oil in Friday's derailment had been treated to reduce volatility. It also wasn't clear if the tank cars in the accident had been retrofitted under the new rules.

To get to refineries on the East and West coasts and the Gulf of Mexico, oil trains move through more than 400 counties, including major metropolitan areas such as Philadelphia; Seattle; Chicago; Newark, New Jersey; and dozens of other cities, according to railroad disclosures filed with regulators.