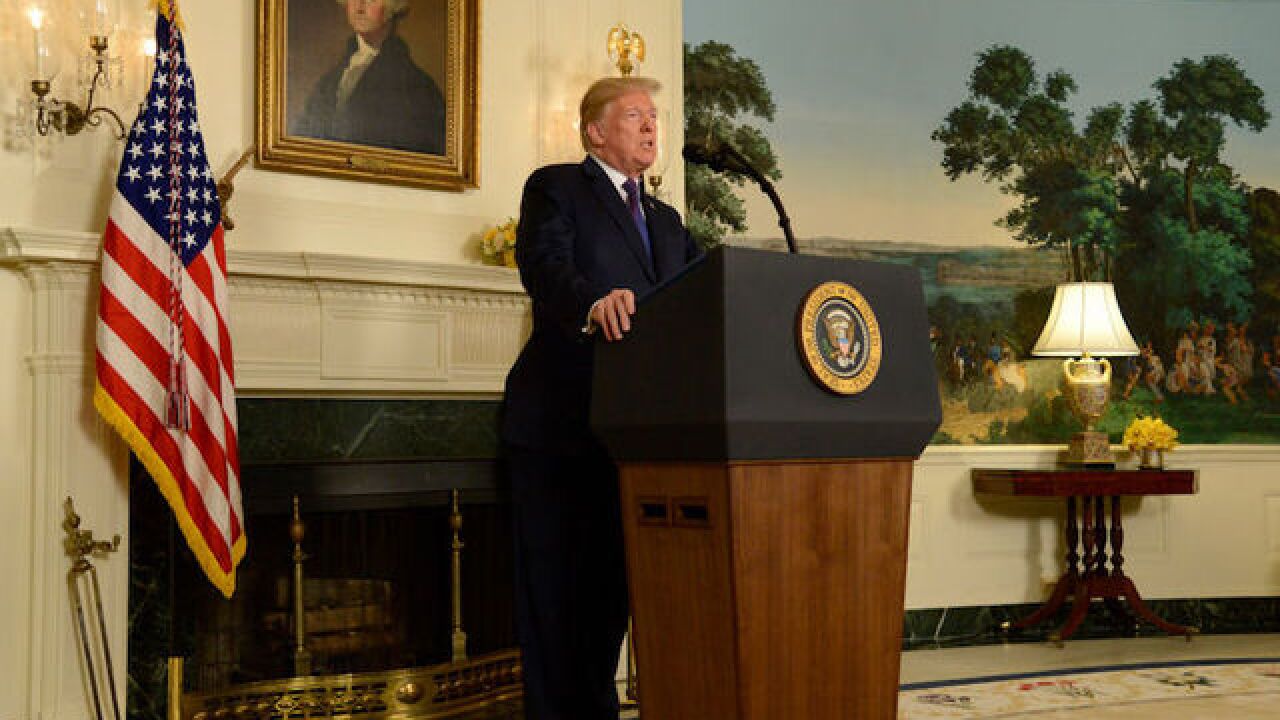 Image copyright 2018 Getty Images. All rights reserved. This material may not be published, broadcast, rewritten, or redistributed.
Pool
<p>U.S. President Donald Trump makes remarks as he speaks to the nation, announcing military action against Syria for the recent apparent gas attack on its civilians, at the White House, on April 13, 2018, in Washington, DC. President Trump announced that a joint operation of "precision strikes" is underway in Syria with armed forces from the United Kingdom and France. </p> 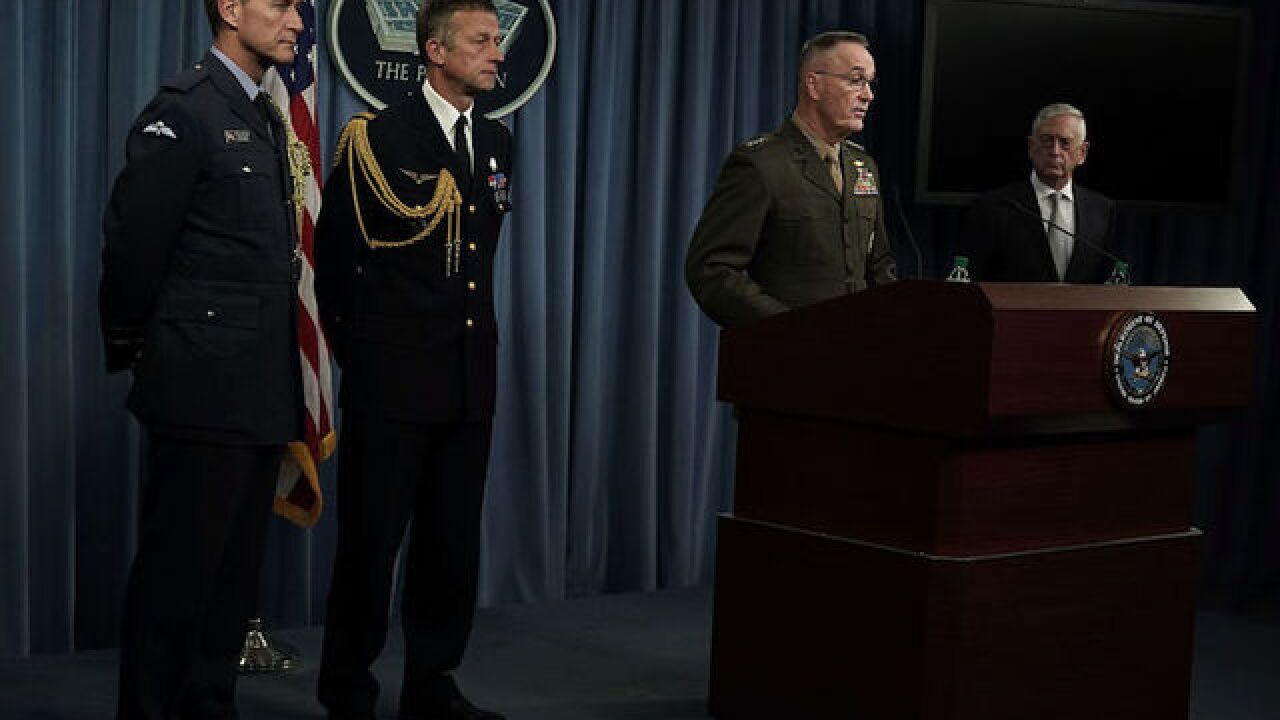 Russia has condemned US, UK and French strikes against targets in Syria over the alleged use of chemical weapons as the Western allies argued they were essential to deter the future use of illegal munitions.

The overnight strikes hit three sites -- one in Damascus and two in Homs -- which US President Donald Trump said were "associated with the chemical weapon capabilities of Syrian dictator Bashar al-Assad."

The action followed a week of threats of retaliation for a suspected chemical weapons attack on civilians in Douma, outside Damascus, where Syrian forces have long been battling rebels.

Russian President Vladimir Putin called the missile strikes an "act of aggression against a sovereign state" and said they were against the UN charter. Russia, a key ally of the Assad government, is calling for an immediate UN Security Council meeting, he said.

Assad said the airstrikes would "only increase the determination of Syria and its people to continue fighting and crushing terrorism in every inch of the country," according to Syrian state TV.

• Iran's Supreme Leader Ayatollah Ali Khamenei said the United States and its allies had committed a "major crime" in Syria.

• The European Union foreign policy chief said the EU supported efforts to prevent the use of chemical weapons.

• UK Prime Minister Theresa May said the military action was believed to have been successful.

The Syrian Foreign Ministry called on the international community "to strongly condemn this aggression," warning it would "pose a threat to international peace and security as a whole," in a statement published by the state-run Syrian Arab News Agency.

Earlier, Assad's office tweeted a video of the Syrian President going to work Saturday, with the caption "a morning of steadfastness."

Danny Makki, a British-born Syrian journalist in Damascus, told CNN the strikes woke up his neighborhood. "You could tell straight away that this wasn't your average Damascus night-time battle. It was something far bigger," he said.

Syrians expressed doubt the military action would change anything.

"Frankly I expected a stronger strike, especially with the blasts that I heard. At least I am glad the strikes didn't attack civilian areas," said Yasser, 28, a Damascus teacher whose last name was not used for security reasons.

"I think this strike is a strong message to Assad for the chemical weapons, but I don't think Assad will change."

Firas Abdullah, a media activist recently evacuated from Ghouta, said, "It is not enough. I can describe it as -- it's just a media strike."

In a televised address Friday night announcing the strikes, Trump said he had decided to take action because last weekend's action by Assad "was a significant attack against his own people" and "not the actions of a man, they are crimes of a monster instead."

The strikes -- the strongest concerted action yet by Western forces in Syria -- were launched at 9 p.m. ET Friday, as most of Europe and the Middle East was shrouded in darkness.

Gen. Joseph Dunford, chairman of the US Joint Chiefs of Staff, said the first allied strike targeted a scientific research center in greater Damascus involved in the development and production of chemical weapons.

In a Pentagon briefing Saturday, Lt. Gen. Kenneth McKenzie, the director of the Joint Staff, said the strikes would set back Syria's chemical weapons capability "for years."

McKenzie described the mission as "precise, overwhelming and effective," adding that "none of our aircraft or missiles in this operation were successfully engaged" by Syrian forces.

Chief Pentagon spokeswoman Dana White said the strikes "successfully hit every target" and that the allies "took every measure" to hit only the intended targets.

Syrian and Russian officials gave a different assessment of the effectiveness of Syrian air defenses.

The Syrian armed forces said 110 missiles were fired on Syrian targets and that the country's defense systems "intercepted most of the missiles, but some hit targets including the Research Center in Barzeh."

The Russian Defense Ministry said Syria had intercepted 71 out of 103 cruise missiles launched by the US and its allies, according to the Russian Embassy in London. It said only seven missiles had reached two Syrian military airfields and that "no serious damage to infrastructure was inflicted."

Russian state news agency TASS reported that none of the missiles fired by the three Western nations struck areas near its naval and air bases in Syria. Those bases come under the protection of Russian air defense units.

A meeting of the North Atlantic Council will be held Saturday afternoon, a NATO official told CNN. France, the United Kingdom and the United States will brief allies on actions taken in Syria, the official said.

UK's May: 'Not about regime change'

In a televised statement Saturday, May said UK forces had undertaken a "limited and targeted strike" and that there had been "no practicable alternative to the use of force to degrade and deter the use of chemical weapons by the Syrian regime."

While a full assessment has not yet been completed, "we believe that the action was successful," she said. "This was not about interfering in a civil war. And it was not about regime change."

May also alluded to the use of a nerve agent last month in the English city of Salisbury. "We cannot allow the use of chemical weapons to become normalized -- within Syria, on the streets of the UK, or anywhere else in our world," she said. Britain says Russia is behind the Salisbury poisoning of a former Russian spy and his daughter, an allegation Moscow denies.

French Foreign Minister Jean-Yves Le Drian said: "This action is a proportionate and targeted one. It is not trying to target Assad's allies nor the civilian population but to dissuade the Syrian regime from pursuing its criminal deeds."

Experts from the international chemical weapons watchdog, the Organization for the Prohibition of Chemical Weapons, were en route to the site in Douma before the joint military strikes. The group said Saturday it would continue on to Syria as planned.

Russia's Ministry of Defense said it believed the Western allies' action was not in retaliation for what happened in Douma but instead was a reaction to the Syrian army's "success" in liberating territory from rebels.

Iran, another key ally of the Assad government, also condemned the strikes. "I firmly declare that the Presidents of US and France and British PM committed a major crime," Khamenei tweeted. "They will gain no benefit; just as they did not while in Iraq, Syria & Afghanistan, over the past years, committing the same criminal acts."

Syrian state TV reported that Assad received a phone call Saturday from Iranian President Hassan Rouhani in which he said Iran would continue to stand by Syria.

Turkey, another important player in the Syrian conflict, said it viewed the airstrikes as "an appropriate response" to the Douma attack, according to a Turkish Foreign Ministry statement.

"We see the operation as a positive step, but there is more to be done for sustainable peace," Turkish Prime Minister Binali Yildirim said.

German Chancellor Angela Merkel said all available evidence pointed to the Assad regime being responsible for the Douma attack and criticized Russia for blocking an independent investigation through the Security Council.

"The military operation was necessary and appropriate to preserve the effectiveness of the international ban on the use of chemical weapons and to warn the Syrian regime of further violations," Merkel said in a statement voicing support for the joint US, UK and French action.

An Israeli official told CNN that the strikes enforced the red line drawn by Trump last year. In April 2017, the United States launched a military strike on a Syrian government airbase in response to a chemical weapons attack that killed dozens of civilians.

"Syria continues to engage in and provide a base for murderous actions, including those of Iran, that put its territory, its forces and its leadership at risk," the Israeli official said.

A spokesman for Jordan's government said a political solution was the only way "to ensure Syria's stability, territorial integrity and the security of its people."

Australia's defense minister issued a statement in support of the strikes, calling them "a calibrated, proportionate and targeted response."