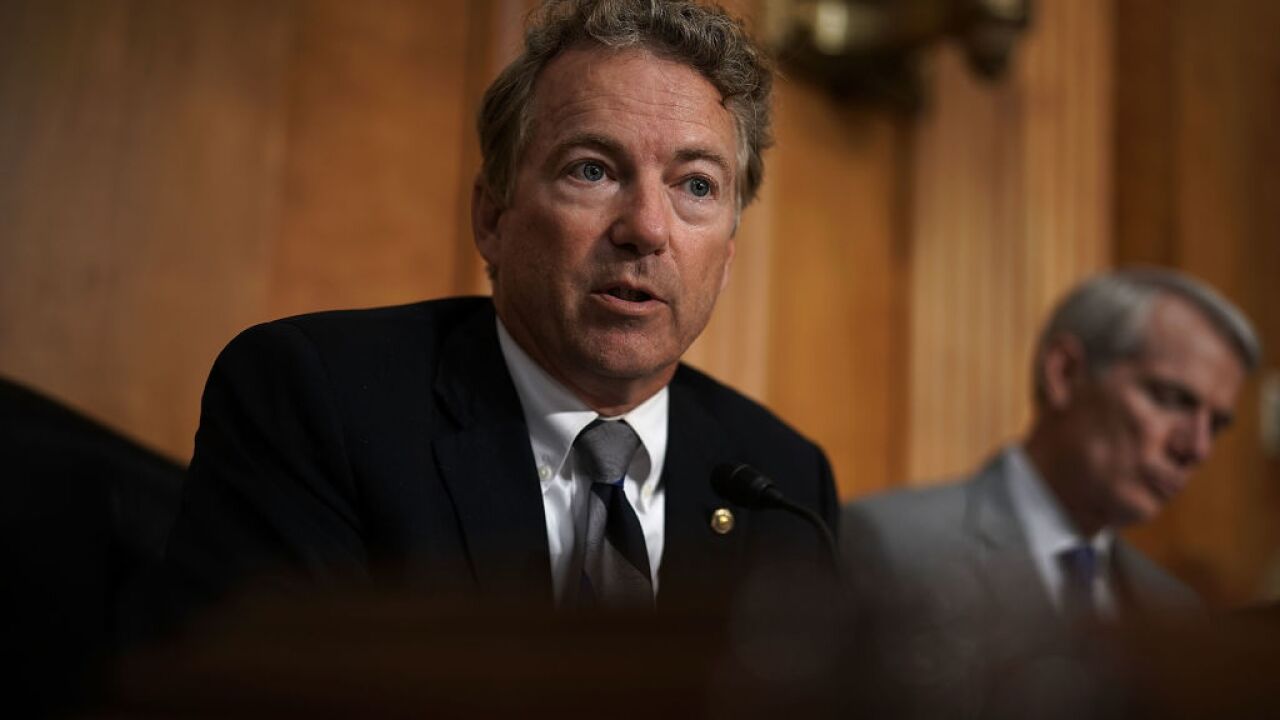 Republican Sen. Rand Paul objected Wednesday to an attempt to pass the bill funding 9/11 first responders' health care unanimously, arguing that passing such a long-term bill without offsetting the cost would contribute to the national debt.

The delay presents another hurdle in the dramatic fight to secure funding for the September 11th Victim Compensation Fund, despite Senate Majority Leader Mitch McConnell's continued reassurances that the fund would be fully funded. After comedian and fund advocate Jon Stewart gave emotional testimony last month accusing lawmakers of failing to support the bill, the measure was swiftly approved for a floor vote in the House and passed the lower chamber last week by an overwhelmingly bipartisan 402-12 margin.

When presidential candidate and Democratic Sen. Kirsten Gillibrand of New York requested unanimous consent -- a procedural move that allows a bill to skip several steps to pass unanimously, without senators casting an individual vote -- on the bill on the Senate floor Wednesday so that it be accelerated to a vote without debate, Paul objected.

"It has long been my feeling that we need to address our massive debt in this country -- we have a $22 trillion debt, we're adding debt at about a trillion dollars a year," he said. "And therefore any new spending that we are approaching, any new program that's going to have the longevity of 70, 80 years, should be offset by cutting spending that's less valuable."

"We need to at the very least have this debate. I will be offering up an amendment if this bill should come to the floor, but until then I will object," added Paul, who voted in favor of President Donald Trump's $1.5 trillion tax cut. That tax cut is helping drive a deficit increase.

Speaking on the floor afterward, Gillibrand said that she was "deeply disappointed" in Paul's decision.

Gillibrand grew emotional describing how first responders have "had to use their most precious commodity, time" by being away from their loved ones "to come here -- to walk the halls of Congress, to go to office after office, to ask that this body and this government stand by them in their greatest time of need."

"We could pass this bill right now," she added. "But instead, my colleague has objected, asking people to come back over and over. Everyone loves to point fingers in this place, where there's nowhere else to point that finger today than this chamber."

Senate Minority Leader Chuck Schumer also slammed Paul's objection, saying on the floor that he would ask Paul to consider the American tradition that when people "volunteered in the armed services and risked their lives for our freedom, we came back and gave them health care."

"I would urge my friend from Kentucky to withdraw his objection," Schumer added. "I would urge Sen. McConnell the leader to put it on the floor now. And we can let these folks in the gallery and so many others, do what they need to do -- help their families, help their friends, and make sure their health is given the best, best protection possible."

Paul addressed his objection later Wednesday on Twitter , arguing that he was "not blocking the 9/11 bill - simply asking for a vote on an amendment to offset the cost."