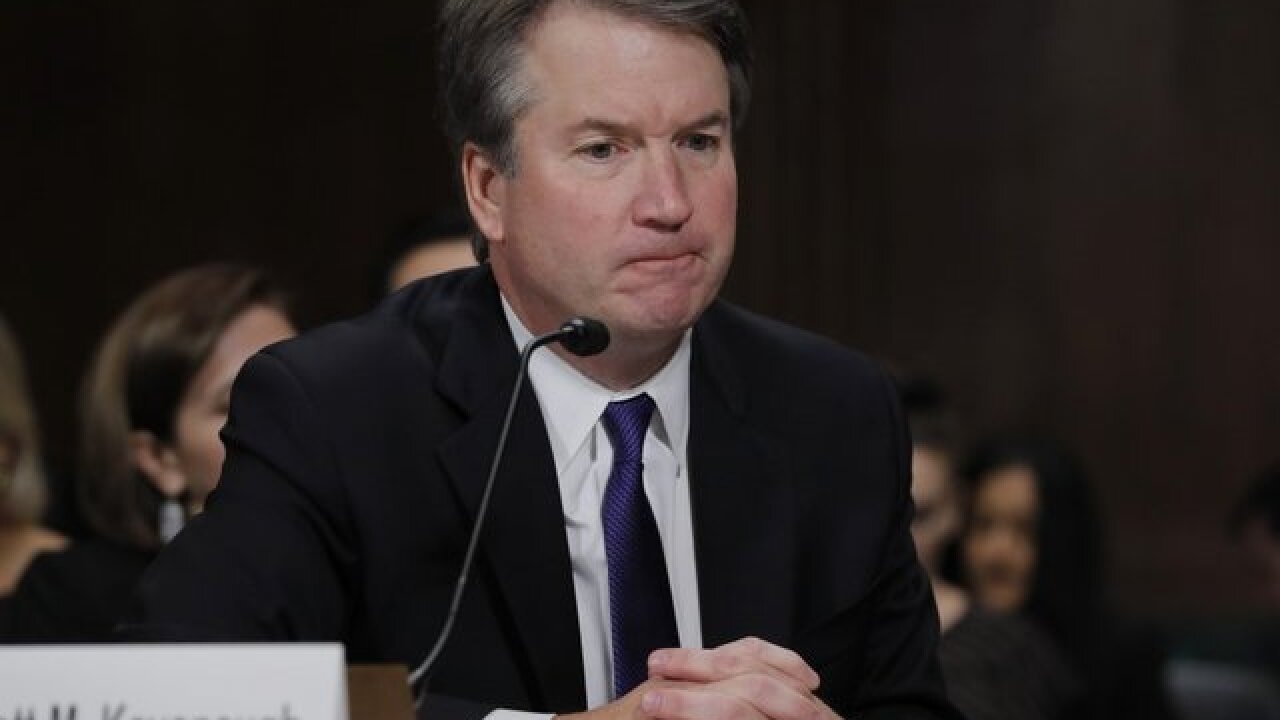 The FBI's supplemental investigation into the sexual assault allegations against Judge Brett Kavanaugh was limited in scope from the beginning.

There was never a directive to the FBI to investigate a third assault allegation against Kavanaugh, or to probe his drinking habits and whether he lied about them to the Senate Judiciary Committee, according to a source briefed on the investigation.

The reason for that limited scope is now at the heart of the fight between Democrats and Republicans over the 45-page FBI report that senators have been able to review in the Senate's secure spaces ahead of a key procedural vote Friday on the Supreme Court nominee.

Senate Republicans and the White House say they allowed the FBI to pursue leads within the parameters that Sen. Jeff Flake and other undecided Republican senators agreed to: credible, current allegations against Kavanaugh.

They point to the fact that the FBI ultimately conducted interviews with nine people as part of the investigation, more than just the initial witnesses named in last week's hearing.

And for Julie Swetnick -- who among other allegations accused Kavanaugh of sexually aggressive behavior at alcohol-fueled parties when he was in high school -- the accusation was deemed not credible by the White House, so it was not part of what the FBI was instructed to look at, according to a source briefed on the investigation.

But Democrats argue that the parameters that Republicans initially set chartered a course for the FBI that was never going to uncover anything that could corroborate the assault accusations from Christine Blasey Ford, Deborah Ramirez and Swetnick.

In particular, they charged that the White House prevented the FBI from interviewing Kavanaugh and Ford themselves.

"It's simply not credible to say that public testimony in last week's hearing is a substitute for interviews by FBI agents," said Sen. Dianne Feinstein, the top Democrat on the Judiciary Committee. "Not only do senators lack the expertise of FBI agents, we were only given five minutes to question Judge Kavanaugh. Democrats agreed that the investigation's scope should be limited. We did not agree that the White House should tie the FBI's hands."

Kavanaugh has vehemently denied all allegations against him, including those of Ford, Swetnick and Ramirez.

Ultimately though, the question of whether the FBI investigation was satisfactory will come down to the three Republican senators and one Democratic senator on the fence — Sens. Susan Collins, Lisa Murkowski, Jeff Flake and Joe Manchin respectively — who pushed for the investigation in the first place and will decide Kavanaugh's fate.

Those senators were not raising objections to the FBI's background investigation after their first look at the materials Thursday.

"It appears to be a very thorough investigation," said Collins, adding that she needed to read the report herself.

Murkowski did not attend the initial Republican briefing on the report. Leaving the briefing room after her first look at the documents, Murkowski said she needed to read the report before she could determine whether it was thorough enough.

Statements from the White House and Republican senators have not made it clear — and at times have been contradictory — over how the parameters for the FBI's investigation were decided.

"There was an initial list of four provided to us by the Senate. They were interviewed and leads were followed up on," Shah said on CNN's "New Day."

But Republican senators said they didn't provide the FBI with a list of who should be contacted.

"We did not come up with a list people who the FBI should interview," said Sen. Mike Lee, a Utah Republican. "The FBI was requested to conduct an investigation into any and all credible, current accusation of sexual misconduct by Judge Kavanaugh. And they FBI made the decision from there as to who to interview."

"That's not what the senators requested, that's not where this investigation's scope went, it went to serious allegations and it tried to corroborate them with a set of interviews," he said.

What is and isn't included in report

The FBI report was sent to Capitol Hill with a standard background information cover sheet, but not a summary, says a source briefed on the investigation. Only a single copy was provided, and Judiciary Committee aides in both parties briefed senators about the materials before senators were able to read the document themselves.

In addition to the FBI interview summaries, which are known as 302s, the FBI report also includes information that came into the FBI's tip line, according to congressional sources and people briefed on the documents.

CNN has reported on a number of individuals from Yale who said they had reached out to the FBI to report information but had not been subsequently contacted by the FBI.

The report includes 45 pages of interview summaries and an additional 1,600 pages of information that the FBI sent up from its tip line. Lawmakers did not ask for the additional pages, according to the source, who said that broad search terms were used that also captured information not directly related to the allegations.

So far, it appears a majority of the people interviewed were those already sympathetic to Kavanaugh.

Of the six who are known interviews, Mark Judge, Patrick Smyth, Tim Gaudette and Chris Garrett were not expected to be hostile to the Supreme Court nominee. Ramirez was expected to repeat her allegations against Kavanaugh, as well as Leland Keyser, who has previously said through her lawyer that she doesn't recall the alleged incident.

The FBI reached out to 10 people, but ultimately conducted nine "comprehensive interviews." The identifies of the other witnesses are not yet known.

Two sources say an envelope went up to Capitol Hill on Thursday with addendum information to one of the FBI interviews.

Because a single report was sent to Capitol Hill, it wasn't simple for senators to just read the document. Sen. Ron Johnson, a Wisconsin Republican, said Judiciary Committee staff was reading the report aloud to senators, while other interviews were being passed around for senators to look at.

"They were certainly reading probably the most relevant ones as well. Some of the less relevant ones are ones being passed around. It's an interesting process," Johnson said. "I've never seen anything like that before. ... This is unusual circumstances calling for kind of (an) unusual process."

Democrats took a dimmer view, saying there wasn't time to read everything before Friday's procedural vote.

Sen. Chris Murphy of Connecticut called it a "mockery," and said it was "one of the most humiliating things I've ever taken part in."