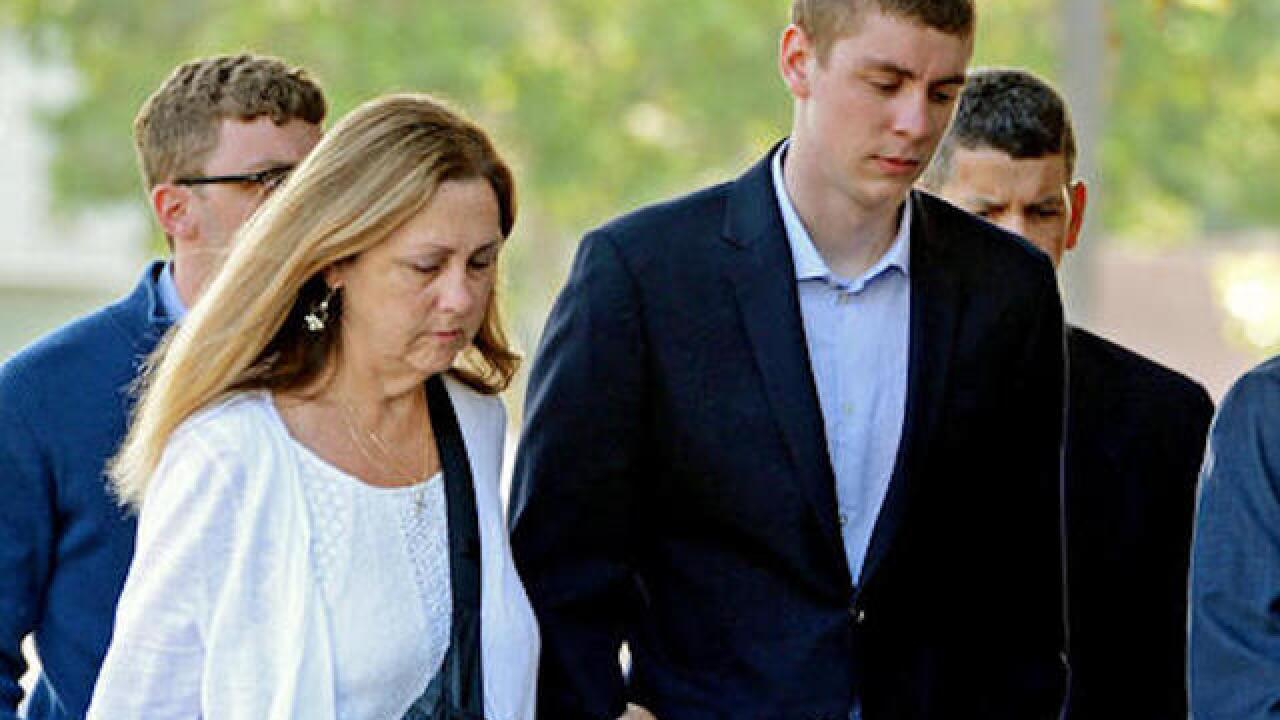 Bay Area News Group
Dan Honda
<p>In this June 2, 2016 file photo, Brock Turner, right, makes his way into the Santa Clara Superior Courthouse in Palo Alto, Calif. A letter written by Turner's father was made public over the weekend by a Stanford law professor who wants the judge in the case removed from office because Brock Turner's sentencing. (Dan Honda/Bay Area News Group via AP) </p>

SAN FRANCISCO (AP) — Stanford University "did everything within its power" to ensure justice in the case of a former swimmer sentenced to six months in jail for sexually assaulting an unconscious woman, saying it moved swiftly to investigate and punish the student but that more needs to be done at the school and elsewhere to end sexual violence.

The university banned Brock Turner from campus after wrapping up its investigation less than two weeks after the attack, calling it "the harshest sanction that a university can impose on a student," according to a statement released Monday. The school says it reached out to the victim to offer support and inform her of the steps it was taking.

"In this case, Stanford University, its students, its police and its staff members did everything they could," the statement said.

The 20-year-old Turner was sentenced last week to six months in jail and three years' probation, sparking outrage from critics who say Santa Clara County Judge Aaron Persky was too lenient on a privileged athlete from a top-tier swimming program. Some are urging he be removed from the bench.

The case gained national attention after prosecutors released a poignant statement from the 23-year-old victim that she read in court. Criticism intensified when a letter from Turner's father to the judge was released, in which he pleaded for leniency and said his son had already paid a steep price for "20 minutes of action."

Stanford acknowledged that more needs to be done but said it is a national leader in implementing prevention programs, student training on intervention and support for victims.

"There is still much work to be done, not just here, but everywhere, to create a culture that does not tolerate sexual violence in any form and a judicial system that deals appropriately with sexual assault cases," its statement said.

The judge said in court Thursday that the sentence followed the recommendation of the county's probation department. Persky cited Turner's clean criminal record and the effect the conviction will have on his life. Turner, of Dayton, Ohio, also must to register for life as a sex offender after a jury convicted him of three felony counts of assault and attempted rape.

The prosecutor disagreed with the sentence, arguing for a six-year term for crimes that could have sent Turner to prison for 10 years. But lawyers who have appeared in Persky's court call him a fair and conservative judge.

The judge is barred from commenting on the case because Turner is appealing his conviction, court spokesman Joe Macaluso said.

Some are urging for Persky's recall in Change.org petitions, and Stanford University law professor Michele Dauber, a friend of the victim, launched a campaign to remove Persky from the bench. Dauber didn't return phone calls and email inquiries from The Associated Press seeking comment Monday.

But Santa Clara County District Attorney Jeff Rosen, whose office argued for a prison sentence for Turner, said Persky should not lose his job because of the ruling.

The backlash over the case flared when Dauber released the letter Turner's father wrote to the judge before sentencing, saying his son had lost his appetite and will never be his happy-go-lucky self again.

Turner left Stanford, whose men's swim team is one of the top 10 teams in the country this season, and his once-promising Olympic-hopeful swimming career has ended abruptly.

"His life will never be the one that he dreamed about and worked so hard to achieve," the father wrote. "That is a steep price to pay for 20 minutes of action out of his 20 plus years of life."

The emotional statement that the victim read in court described how the attack left her emotionally scarred. She was so intoxicated that she did not wake up until hours after the attack. Turner also was intoxicated.

"My independence, natural joy, gentleness, and steady lifestyle I had been enjoying became distorted beyond recognition. I became closed off, angry, self-deprecating, tired, irritable, empty," she said.

The Associated Press does not generally identify victims of sexual abuse or assault.

Two graduate students say they saw Turner assaulting the woman and he ran off when they approached. One of them chased after Turner, tackled him and held him down until police arrived.