The reason you can't stop watching the lava 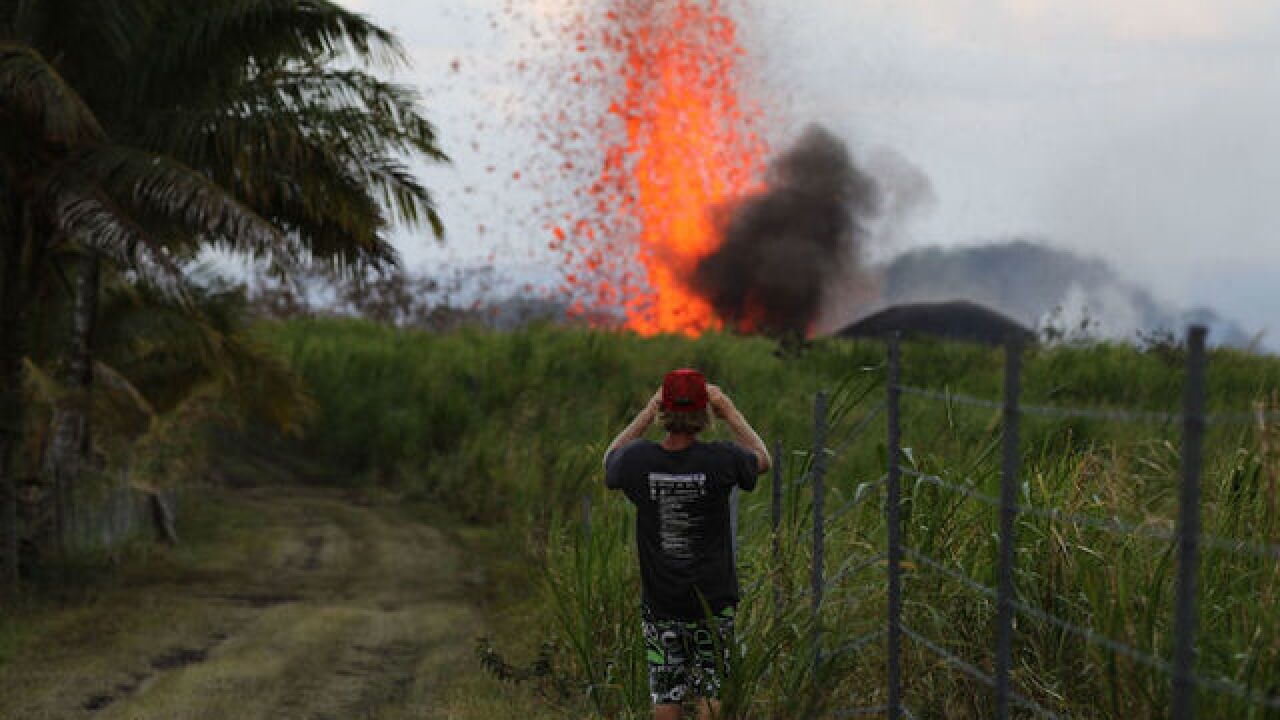 Image copyright 2018 Getty Images. All rights reserved. This material may not be published, broadcast, rewritten, or redistributed.
Mario Tama
<p>A man takes a photo of a lava fountain from a Kilauea volcano fissure on Hawaii's Big Island on May 18, 2018 in Kapoho, Hawaii. </p>

Lava exploding as it pours into the sea. Cars engulfed in a molten torrent. Steam billowing, cloud-like, as inner Earth meets ocean.

There is something mesmerizing about the sheer power of Hawaii's Kilauea volcano, magnificent and malevolent all at once, a reminder that for all of our modern-day progress, nature possesses vast powers we cannot tame. Around the world, but especially in the United States, people are watching, rapt.

It's almost a relief, this showing of natural fury. Oddly, it touches a different but equally cathartic point as last weekend's royal wedding, another much-needed opportunity to turn away from the social and political chaos inundating our news feeds.

As Harry and Meghan wed, we marveled at the touching and decorous show of genuine love, of African-American traditions blending into the stodgiest of British ones -- a biracial American divorcee marrying a real-life prince; a promise that progress does happen and the world does change for the better.

Kilauea is not a show of love, for sure. But it is equally awe-inspiring. And it's a necessary reminder that despite incredible human advances, we are very tiny, insignificant and, ultimately, existing at the pleasure of Mother Nature.

There is a kind of psychic salve in this. As we spend our days clicking from political scandal to mass tragedy back to political scandal, creating temporary diversions with online quizzes and social media scrolling, there is something transfixing about the heavy, steady creep of lava.

In our hyper-anxious world, we try to control all that's around us -- we sweat if our phone chimes with a text and we can't immediately look; we curate Instagram and Facebook feeds to present an image of ourselves that is #authentic but in reality filtered and Facetuned; some of the richest men in America spend their billions trying to live forever.

At the same time, those of us who are paying attention are starting get a fuller picture of just how much this control is an illusion, with powerful tech companies increasingly in charge of the news and information we consume (even if we think we're choosing with our clicks), and our current political reality laying bare just how fragile American democracy might be.

Lava rolling into the ocean, obliterating everything it passes, sending toxic spume into the air, is cataclysmic -- a feral threat emerging from the inner belly of Earth. It is oddly unifying, sparing nothing and no one in its path. It's in charge.

We sometimes think much of what happens in the world is out of our hands, that it's up to God, or that the answer is prayer, or that what will be will be, or that everything happens for a reason. Usually, this isn't true. The truth is political policy shapes the way we experience the world every day -- everything from crime to addiction to economic mobility to physical health to the environment.

For many of us, anxiety comes from knowing things could be different. We worry that we lack control over a disastrous political situation, and are hoping that someone competent is steering this ship -- and increasingly seeing that they are not.

With our smartphones and laptops shaping so much of our lives, we have long assumed that the people and institutions directing our connections with each other are benevolent figures who simply offer us greater choice. We are increasingly seeing that they are not, and that we do not fully grasp the scope of what our technological age has wrought.

It lets us turn our attention to an indiscriminate force that we can do nothing about. Except watch (and close geothermal power plants), staring in awe at this mighty force of nature breaking through the surface of the world we share. In today's America, it's a curiously comforting respite.