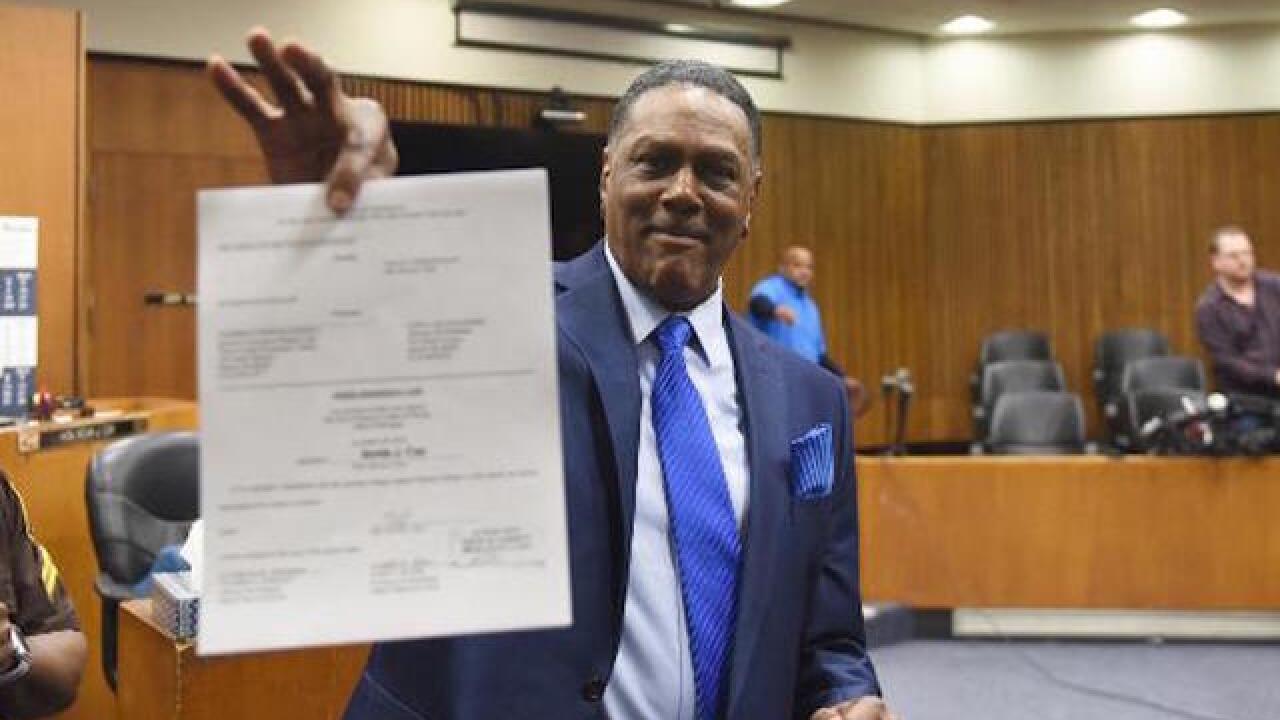 © 2018 Cable News Network, Inc.
Max Ortiz
<p>Richard Phillips shows his order of dismissal of homicide charges against him in Judge kevin Cox's courtroom at the Frank Murphy Hall of Justice in Detroit on Wednesday, March 28, 2018. Phillips, whose murder conviction was thrown out after he spent 45 years in prison, was exonerated Wednesday and won't face a second trial. (Max Ortiz/Detroit News via AP)</p>

One of the first things Richard Phillips did when a judge finally declared him a free man is go on a grocery run. He was amazed to discover how many varieties of orange juice are on sale.

It's just one of many revelations Phillips is dealing with these days after 45 years in prison for a crime he didn't commit.

Phillips was exonerated earlier this week after a judge threw out his murder conviction. When he went in, the Detroit man was 27. He turns 72 next month.

The time he served behind bars makes Phillips the nation's longest serving exoneree in history, says the Innocence Clinic at University of Michigan law school.

"The world has changed, a lot of people have changed," Phillips told CNN on Thursday. "I have a lot of adjustments to make."

The crime for which he was charged

Phillips was an auto worker in Detroit when a man named Gregory Harris was dragged from his car and shot to death in June 1971.

Based on the testimony of the victim's brother-in-law, police arrested Phillips. The brother-in-law told investigators he'd met up with Phillips and another man, Richard Polombo, at a bar to discuss Harris' murder.

Phillips and Polombo were convicted. And in October 1972, Phillips was sentenced to life in prison without the possibility of parole.

The break in the case

Years went by. Phillips' contention that he was innocent fell on deaf ears.

Then, in 2010. Polombo said he lied. He told a parole board that he killed Harris along with the brother-in-law; Phillips had nothing to do with it. In fact, Polombo said, he didn't even know Phillips.

But Phillips wasn't made aware of this exculpatory evidence until four more years.

In 2014, someone tipped off the Innocence Clinic, an organization that investigates prisoner claims of innocence.

After speaking with both Polombo and Phillips, the clinic took up his cause -- and began working quickly to get him a new trial.

After years in and out of court and court of appeals, Phillips was finally granted a new trial late last year.

"When he first got his new trial, prosecutors dangled a carrot," Phillip's attorney Gabi Silver told CNN. "They said if he agreed to a plea deal, he could get out faster."

"He told me, 'I will die in prison before I agree to a plea deal.'"

On December 14, a judge overturned his murder conviction, making him the first person to be exonerated by the Wayne County Prosecuting Attorney's new Conviction Integrity Unit.

But he had to wait until Wednesday to become a free man permanently.

That day, Phillips -- wearing a blue suit and a big smile -- listened as prosecutors dismissed all charges against him.

"The system failed him. There's no question about it," Wayne County Prosecutor Kym Worthy told reporters. "Justice is indeed being done today."

Michigan adopted the Wrongful Imprisonment Compensation Act in 2016, which grants $50,000 for every year that a person has been wrongfully imprisoned. This makes Phillips eligible to receive up to $2,250,000.

Silver, Phillip's attorney, told CNN that she was "hopeful and very confident" that he would receive full compensation.

"The most difficult part of my journey since being freed has been that I do not have financial assistance from the state," Phillips said. "Exonerees do not get very much compensation from the State of Michigan."

Phillips says he has been living off $80 worth of food stamps each month since December.

"He's a very smart man," Silver said. "He's made some friends. He's living in an apartment with a friend. He wants to get his driver's license. He's very artistic."

Despite his struggles, however, Phillips remains optimistic.

"I am not bitter," he told CNN. "I was upset at first, but mistakes happen in this world. No life is perfect. Everybody has problems. It would be unimaginable for me to be upset because I had problems, because everybody has them."

Phillips spoke at length about his amazement at new technology.

"When I left the streets, if there were any phones at all, they were these big boot-like portable phones," Phillips laughed. "It would look like you had a big shoe up to the side of your face. We didn't have all these gadgets. iPhones didn't exist."

When Phillips was convicted, he left behind a wife and two children, ages 4 and 2. He hasn't had contact with them since and hopes to reconnect soon.

"I have not seen my children in 45 years," Phillips said. "I hope that they will see my story in the news and come find me."

In the meantime, Phillips is enjoying life outside of the prison walls.

"I'm so happy to be free, I'll make any adjustment I have to make," Phillips said. "Despite the hardships, I am very upbeat about my newfound freedom."