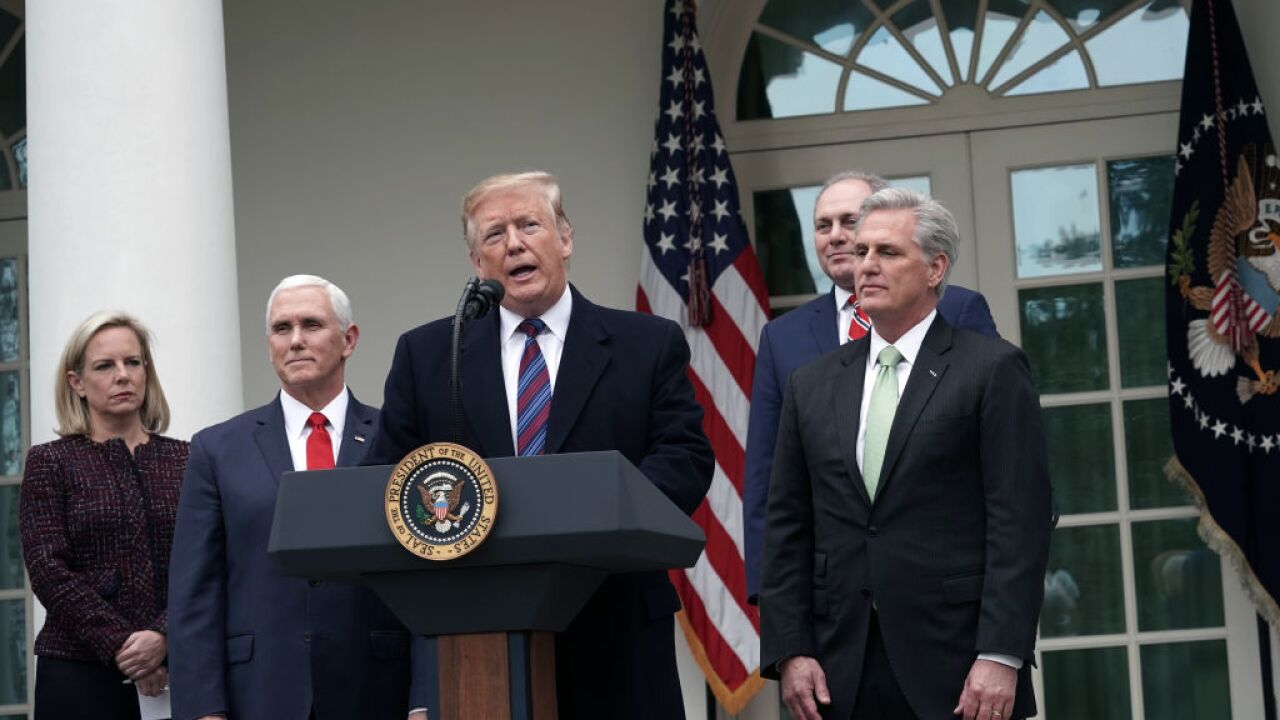 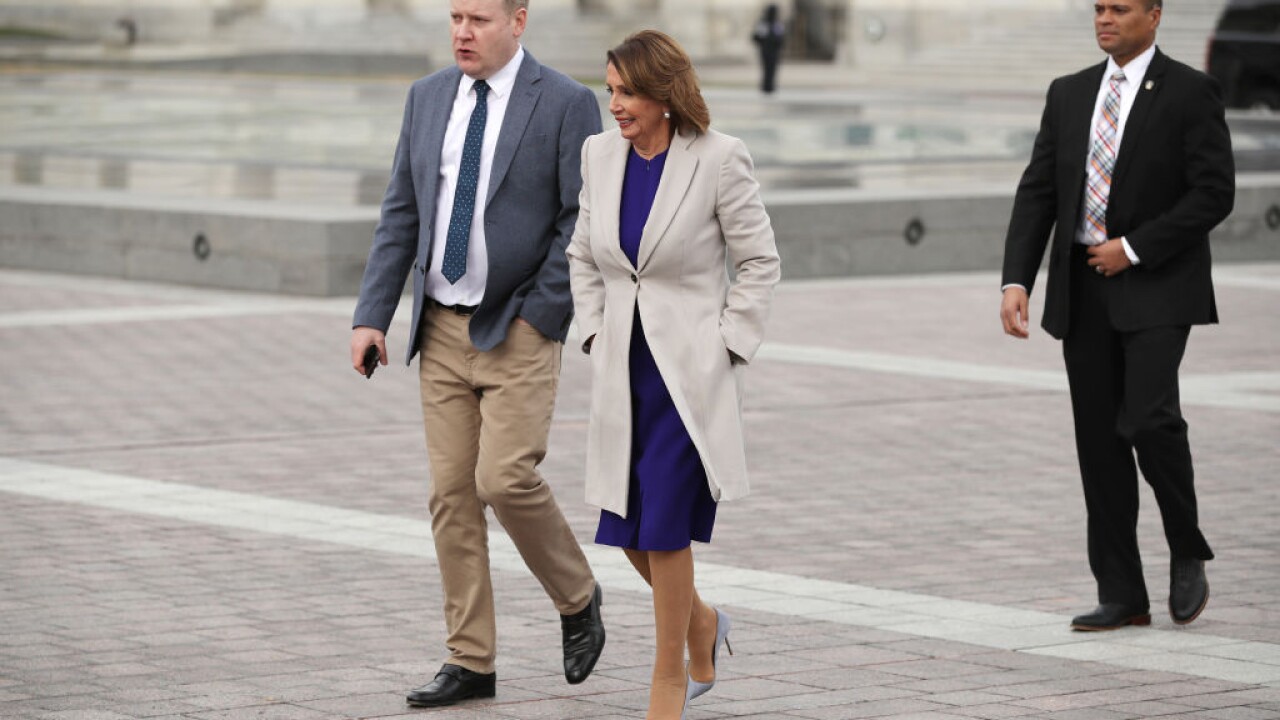 UPDATE (2 PM EASTERN, WASHINGTON, D.C.): President Donald Trump and Vice President Mike Pence spoke to the media following the leaders of the Democratic Party speaking to the media Friday. The speeches were made after they all met regarding the current government shutdown.

President Trump said the meeting was positive, and progress was made. He will have a group focused on the shutdown talks over the weekend.

Trump went on to talk about issues at the U.S.-Mexico border, talking about someone who was shot and killed at the border and said "we don't want that happening." He said the ports of entry have great security but there is fencing and walls that stop because proper border security is still needed.

People illegally entering the country go to the weakest and most unprotected parts of the border, the President explained.

Children are hurt more than anyone else because of open borders, Trump said. They are the victims of people bringing them through unsafe areas, and are susceptible to attacks by coyotes.

There is a lot of open space, he said he told Pelosi, Schumer and the other leaders he met with Friday.

Both sides emerged sounding further entrenched , rendering an end to the impasse ever more elusive.

"We cannot resolve this until we open up government and we made that very clear to the President," newly elected House Speaker Nancy Pelosi told reporters from the White House driveway after the meeting concluded.

She described the session as "a lengthy and sometimes contentious conversation."

The midday meeting between Trump and congressional leaders in the White House Situation Room was a repeat affair after a similar session on Wednesday devolved into bickering and finger-pointing. On Friday, Trump found himself facing Pelosi a way after she was elevated to speaker, along with Senate Democratic Leader Chuck Schumer, both of whom say they will not bend in opposing Trump's demand for border wall funding.

Both sides were expected to address reporters afterward; the Democrats from the White House driveway and Trump from the Rose Garden.

Earlier in the day, the President sent a list of demands to Capitol Hill , releasing publicly a letter sent to members of Congress outlining the reasons he continues to seek a border wall. He said he was taking the step because Democratic lawmakers refused to listen the presentation during Wednesday's meeting at the White House.

"As the enclosed presentation makes clear, current funding levels, resources, and authorities are woefully inadequate to meet the scope of the problem," Trump wrote in a publicly released letter. "We are no longer in a status quo situation at the Southern Border but in a crisis situation. Status quo funding is not enough."

"Absolutely critical to border security and national security is a wall or a physical barrier that prevents entry in the first place," Trump said.

The letter was intended to perpetuate the White House's view of the border issue as a national security emergency -- one of the reasons that meetings with lawmakers this week were convened in the highly secure Situation Room, which has been used in the past to oversee classified raids or military campaigns.

White House aides also hoped the classified setting -- where members of the media are not typically allowed -- would avoid an on-camera setting like Trump held with Pelosi and Schumer in early December, when the Democrats essentially goaded the President into saying he would own any government shutdown.

Trump has largely abandoned that vow, blaming the state of affairs on a myriad of factors: Schumer, Pelosi's speakership prospects and the 2020 election.

Democrats, meanwhile, believe they have effectively jammed Senate Majority Leader Mitch McConnell with the plan the new Democratic House passed Thursday night -- a bill to reopen the government with no additional wall funding -- and that rank-and-file GOP senators will start to feel pressure and begin sending word that it's time to buck the President and put the Democratic proposals on the floor.

Republican Sens. Cory Gardner of Colorado and Susan Collins of Maine -- both up for re-election in 2020 -- have indicated publicly the shutdown should end before a deal is reached on a wall, signs Democrats take as evidence their strategy is working.

Still, senior Republican aides have noted the decision by Collins and Gardner is hardly reflective of where the broader conference stands. Most Republicans have backed the President's demands for at least $5 billion in funding for the border wall, which was his central campaign promise.

And McConnell has insisted he will not bring for a vote any measure that Trump will not sign. The White House issued a veto threat late Thursday for the package of bills passed by the House.

"The package presented by the House's new Democrat leaders yesterday can only be seen as a time-wasting act of political posturing," McConnell said on Friday. "It does not carry the support of the President. In fact, the administration explicitly indicated yesterday the President would actually veto it. And it cannot earn the support of 60 of my colleagues here in the Senate."

Senators are due back in the Capitol next week after the chamber adjourned Friday morning, meaning the shutdown will likely extend into a third week. Roughly 800,000 federal workers are going without pay and several federal systems are closed, including the Smithsonian museums and some national parks.

Most of the President's allies have encouraged him to remain firm in his demands for border wall funding, even as the prospects of a bill emerging from Capitol Hill with the funds included grew slim with the swearing-in of a new Democratic House.

Even inside the West Wing, the President's senior aides have not counseled him to accept Democratic proposals that would end the shutdown, believing that having the border security fight in the headlines is more preferable than the special counsel's Russia investigation or Michael Cohen's prison sentence.

On Fox News, the President's favorite cable channel, top host Sean Hannity offered a suggestion on Thursday of pairing border wall funding with protections for young undocumented immigrants brought to the US by their parents, recipients of the Deferred Action for Childhood Arrivals (or DACA) program. It's the same plan Sen. Lindsey Graham floated to the President over lunch last weekend, though the President was noncommittal.

Republican and Democratic aides both said such a solution is not currently on the table in negotiations. Democrats have made clear they don't trust the White House or Trump to follow through in any broader deal.