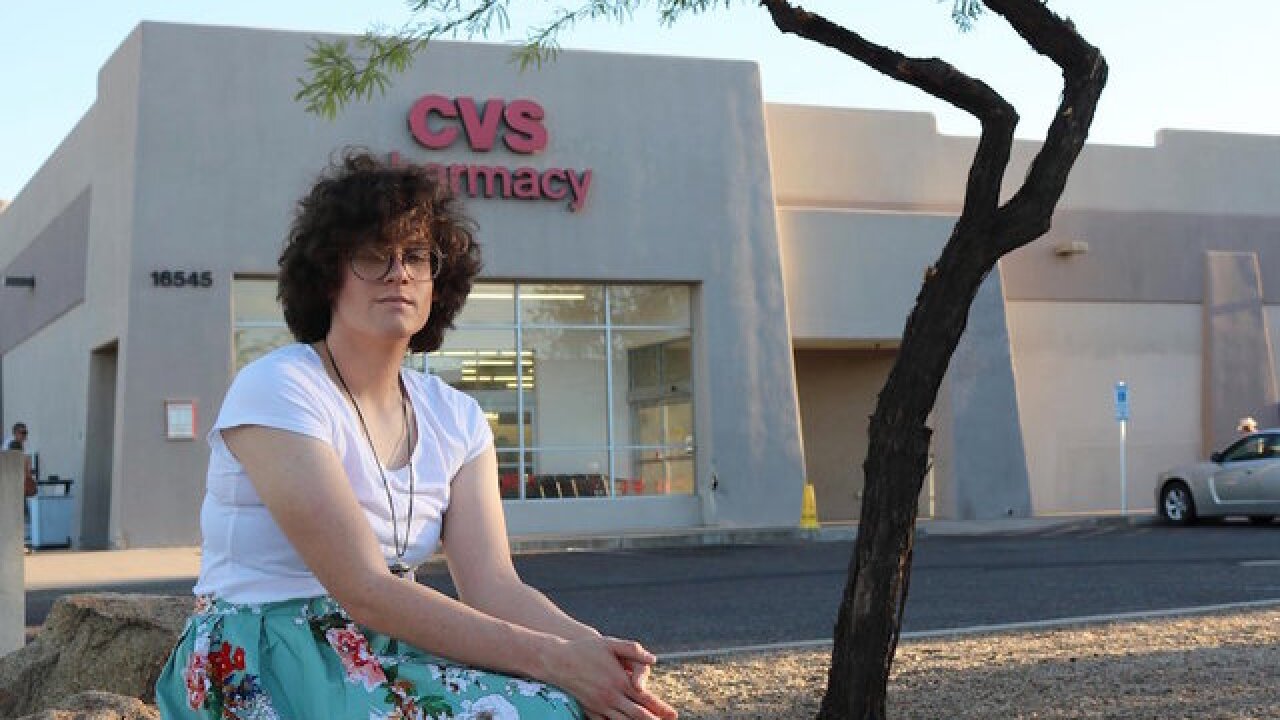 © 2018 Cable News Network, Inc.
ACLU of Arizona
<p>Hilde Hall filed a complaint against a CVS pharmacy in Arizona after she tried to fill her hormone prescription.</p>

Hilde Hall says she went straight from her doctor's office in April to a CVS pharmacy in her Phoenix suburb, eager to fill her first hormone therapy prescription.

The treatment would spur the physical changes in Hall's body that would reflect her identity as a transgender woman, she said.

"I was finally going to start seeing my body reflect my gender identity and the woman I've always known myself to be," she said.

Her elation quickly turned to anxiety when the pharmacist refused to fill her prescription and humiliated her in front of other customers, she said.

Hall said she called the CVS customer service line twice. When no one addressed her concerns, she decided to file a complaint with the Arizona State Board of Pharmacy on Thursday.

In a statement to CNN, CVS said the pharmacist violated company policies and is no longer employed.

"We also apologize for not appropriately following up on Ms. Hall's original complaint to CVS, which was due to an unintentional oversight, " the statement added. "We pride ourselves in addressing customer concerns in a timely manner and we are taking steps to prevent this isolated occurrence from happening again."

CVS has a perfect score on the Human Rights Campaign's (HRC) Corporate Equality Index, which ranks businesses based on their support for LGBTQ equality.

The pharmacist did not give Hall a clear reason for the refusal, she said in a blog post describing the encounter published on the American Civil Liberties Union's website.

"He just kept asking, loudly and in front of other CVS staff and customers, why I was given the prescriptions," she said.

"Embarrassed and distressed, I nearly started crying in the middle of the store," she wrote. "I didn't want to answer why I had been prescribed this hormone therapy combination by my doctor. I felt like the pharmacist was trying to out me as transgender in front of strangers. I just froze and worked on holding back the tears."

In addition to an apology from CVS, Hall also sought an assurance that they do not condone discrimination against transgender customers -- or anyone else for that matter.

"My family supports me, fortunately, and helped me work through the anger and humiliation this experience caused," she wrote. "But many other transgender people are not as fortunate as I am. I don't want to think about what might happen if this pharmacist mistreats a transgender person who does not have a good social support system."

CVS, for its part, made good on both requests. The chain said the pharmacist's action "does not reflect our values or our commitment to inclusion, nondiscrimination and the delivery of outstanding patient care.

"CVS Health extends its sincere apologies to Ms. Hall for her experience at our pharmacy in Fountain Hills, Arizona last spring," the company said.

ACLU Senior Staff Attorney Joshua Block said that assurances from the pharmacy chain are important at a moment in time when civil rights of LGBT are under attack.

"No one should be denied health care because of who they are," Block said. "Right now, the Trump administration is attempting to rollback protectionsfor women and all transgender and non-binary people in federal health care law. No one should have to experience what Hilde did, and yet it is all too common for transgender people and also people seeking birth control around the country. It is critical that CVS ensures no one is harassed when taking a valid prescription into one of their pharmacies."