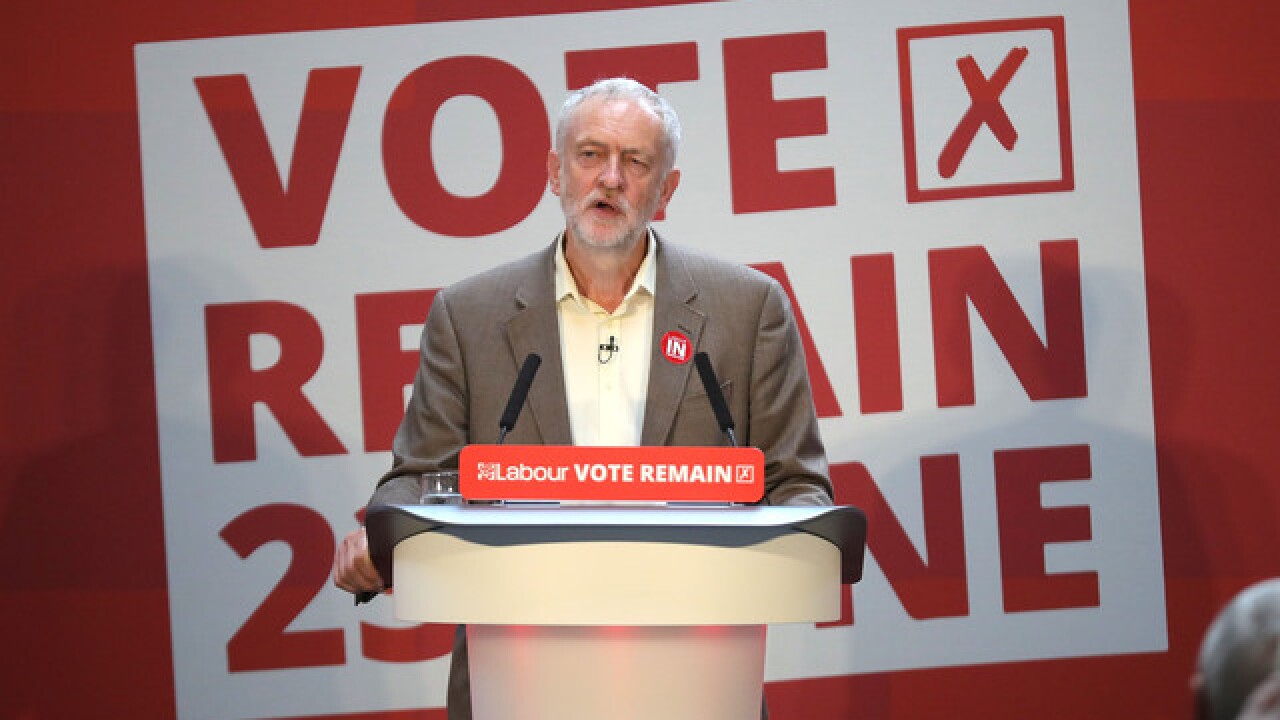 Christopher Furlong
MANCHESTER, UNITED KINGDOM - JUNE 21: Labour Leader Jeremy Corbyn addresses an audience at the People's History Museum and sets out the reasons why Labour is voting remain, in the referendum on June 21, 2016 in Manchester, England. In the final few days of the EU referendum Jeremy Corbyn, Kate Green MP and Alan Johnson MP, set out the positive case as to why the Labour party is voting to remain. Campaigning continues across the UK as the country prepares to go to the polls on Thursday, to decide whether Britain should leave or remain in the European Union (Photo by Christopher Furlong/Getty Images)

Global reactions over “Brexit” flooded social media on Friday after Britain made a historic vote to leave the European Union.
RELATED: Britain votes to leave the European Union
GALLERY: Photos show Britain divided on Brexit vote
As the voting results were announced by U.K. broadcasters, Twitter users – including celebrities – shared a mixture of humorous and serious responses.
See some noteworthy Twitter reactions below.

Suggest we stop using phrase #UnitedKingdom - it doesn't exist. Little England just got a lot smaller. Cameron and Corbyn are both done.

"United Kingdom" always was kind of a mouthful. https://t.co/xhVesCPtW7

#Leave leading #Remain in #Brexit vote. In related news, Brits vote that the 'pound' be renamed the 'ounce.' pic.twitter.com/exrUnRLPbE

Hey United Kingdom imma let you finish but America had one of the greatest #Brexit's of ALL TIME pic.twitter.com/qJwC63lUUa

The end of United Kingdom as we know it.

So, not Y2K after all. Markers are falling the UK is not so U and it feels like fear won today. #Brexit

The good news is, since we just have referendums on complex political issues now, we don't need a prime minister any more. So, every cloud.

I feel embarrassed and ashamed of my country. I hope the US does better when it is their turn.

I've been in remote Norway all week. Anything happen while I was away?

Meanwhile, Lindsay Lohan went on quite the rant regarding her preference for Britain to stay in the EU. Lohan has been living in the country for the past couple of years.
Copyright 2016 Scripps Media, Inc. All rights reserved. This material may not be published, broadcast, rewritten, or redistributed.