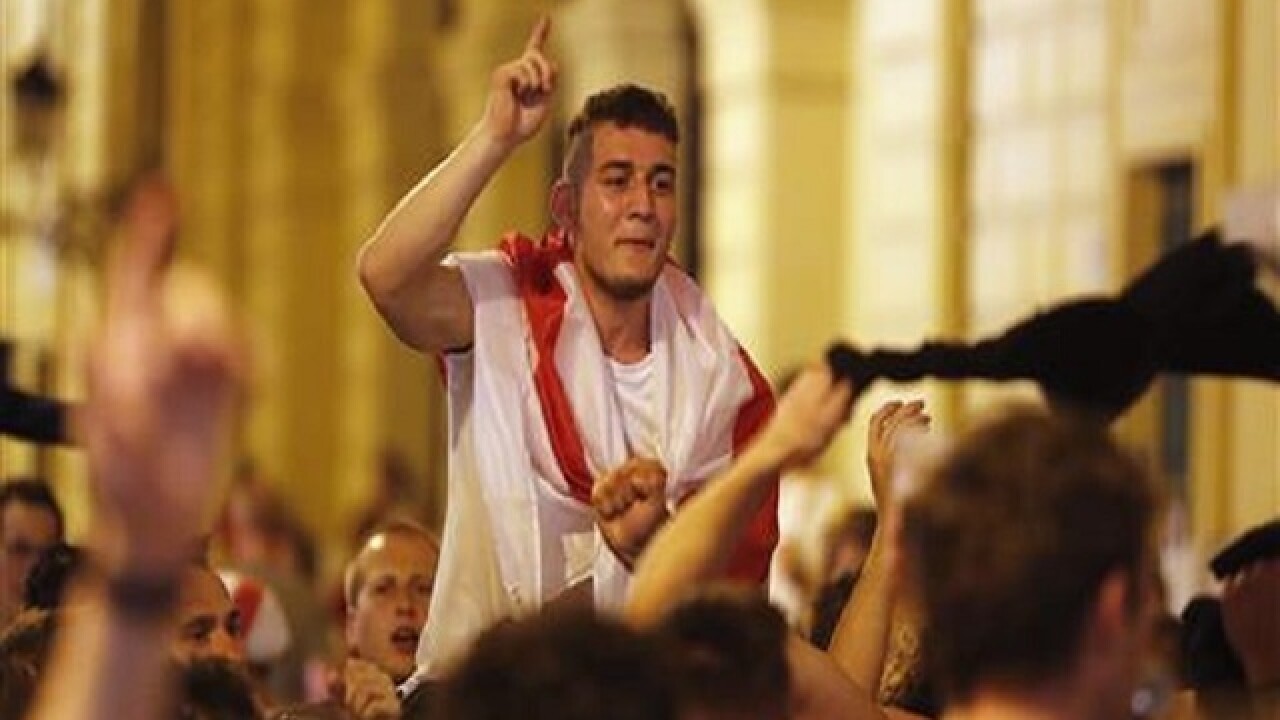 By: Associated Press
Posted at 8:43 PM, Jun 26, 2016
NICE, France (AP) — They voted to take Britain out of the European Union.
Now they're back on the continent hoping to see England's national soccer team conquer Europe.
From beaches to bars around the world, England fans flaunt their patriotism following the team — covering city streets in the flag of St. George and evoking past glories with jingoistic songs.
It was no different on the French Riviera on Sunday but there were new songs, with Brexit backers in the England fan base celebrating Britain's EU seismic referendum result.
"We voted to leave," dozens of England fans chanted on a scorching afternoon in Nice.
The referendum transforming Britain's relationship with Europe was staged between England completing the Euro 2016 group stage and Monday's round of 16 game against Iceland.
England fans flew back into France on Sunday to see newsstands covered with French headlines expressing concerns about the implications of Brexit for the future of the EU.
The result was delivered on Friday morning — with "leave" winning by 52 percent — but the wounds are still raw after a corrosive national debate.
Those divisions were evident in the south of France as England fans sank pints of beer.
"In my age group, between 18 to 30, on Facebook you are vilified if you voted 'Out,'" said Kane Boenke, a bare-chested Millwall fan from London. "You are seen as xenophobic, racist by anyone who voted it seems. People can't accept it."
Overhearing Boenke was fellow Londoner Ed Black, who voted to stay in the EU while harboring reservations.
"I voted 'In' because there was no plan from 'Out,'" Black said. "I agreed with everything 'Out' said, their ambitions are great. But we don't know how they will get there.
"It's like a mystery box. We don't know what's going to happen now."
It is 20-year-olds like Black, early in their working careers, who will feel the repercussions for better or for worse for most of their lives.
"It's a protest that went wrong," said Steve Donaldson. "Why would you leave an economy that is booming? No one thought we would leave."
Steve Mason voted to cast Britain adrift from the EU but was unhappy to hear expletive-laden chants being directed by compatriots at their French hosts on Sunday afternoon.
"I didn't sing because I'm respectful," Mason said.
Just as Mason finished speaking another chant of "We all voted out" broke out outside an Irish pub in the Nice Old Town.
"There was no reason to vote out," responded 24-year-old Chris John. "Even if we did we would need to go into a trade deal with Europe which would have free movement as part of the deal which is the same.
"I was back home after group stage and returned for round 16. I think most of (the French) wanted us to stay in."
But by the time the next European Championship is held in four years' time, Britain is due to be out of the political and trade union formed out of the ashes of World War II.
UEFA designed the 2020 tournament to celebrate Europe, staging matches in 13 cities across the continent. And the centerpiece of Euro 2020 will be in London, with the semifinals and final at Wembley Stadium.
It's likely the rifts and divisions in Britain over the nation's relationship with Europe will still be as fraught.
And England fans are unlikely to stop singing about it.
Copyright 2016 The Associated Press. All rights reserved. This material may not be published, broadcast, rewritten or redistributed.