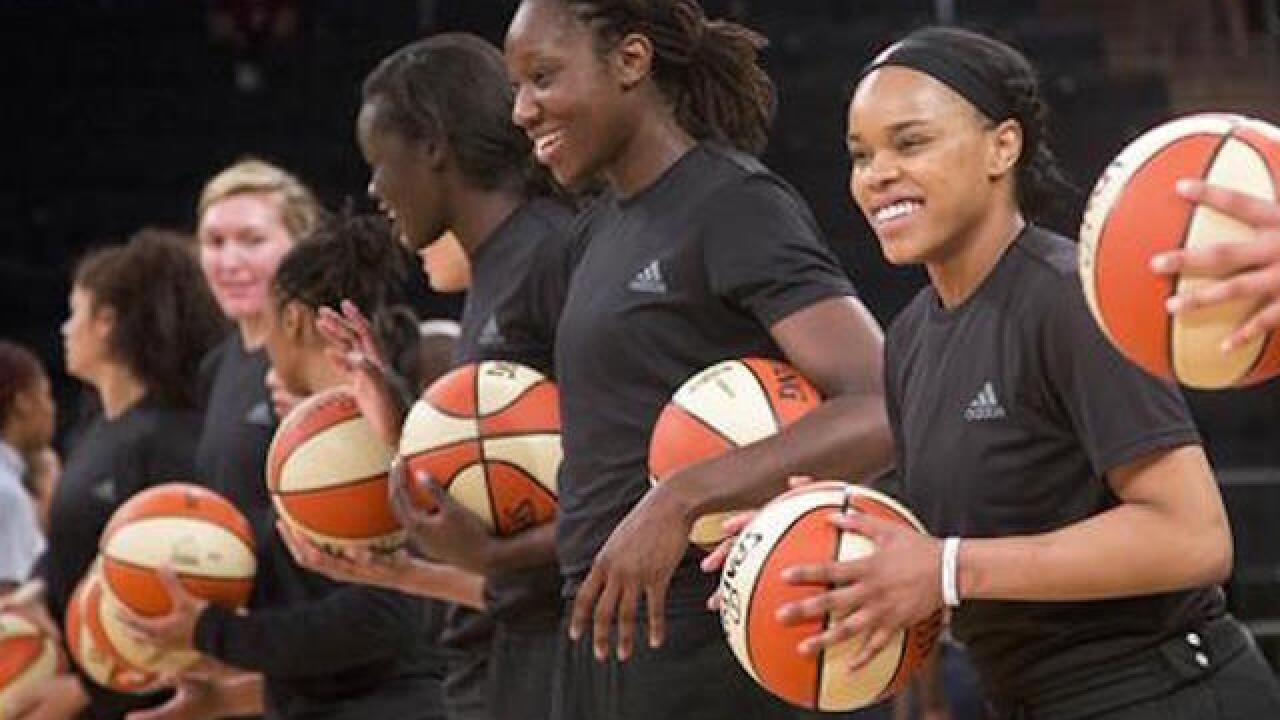 <p>FILE - In this Wednesday, July 13, 2016 file photo, members of the New York Liberty basketball team await the start of a game against the Atlanta Dream, in New York. The WNBA has fined the New York Liberty, Phoenix Mercury and Indiana Fever and their players for wearing plain black warm-up shirts in the wake of recent shootings by and against police officers. All three teams were fined $5,000 and each player was fined $500. While the shirts were the Adidas brand - the official outfitter of the league - WNBA rules state that uniforms may not be altered in any way. (AP Photo/Mark Lennihan, File)</p> <div id="prtlt"> <div>  </div> </div> <p> </p>

NEW YORK (AP) — Social activism is coming at a cost for WNBA players.

The WNBA has fined the Indiana Fever, New York Liberty and Phoenix Mercury and their players for wearing black warm up shirts in the wake of recent shootings by and against police officers.

All three teams were fined $5,000 and each player was fined $500 as the shirts violated the league's uniform policy. While the shirts were the Adidas brand — the official outfitter of the league — WNBA rules state that uniforms may not be altered in any way.

WNBA President Lisa Borders said Wednesday night in statement to The Associated Press the fines were not about the players speaking out on a social issue.

"We are proud of WNBA players' engagement and passionate advocacy for non-violent solutions to difficult social issues but expect them to comply with the league's uniform guidelines," Borders said.

Nonetheless, Indiana Fever All-Star Tamika Catchings, who is retiring at the end of the season and is the president of the players union, is also disappointed in the WNBA's actions.

"Instead of the league taking a stance with us, where they tell us they appreciate our expressing our concerns like they did for Orlando, we're fighting against each other," she said.

The league was quick to give every team shirts in support of the Orlando tragedy in June, which the players wore.

"We were OK with that, we wanted to support that, but also they can't pick and choose what initiatives to support and what not to support just because it doesn't push their agenda," Liberty guard Tanisha Wright said. "This is important to us."

Typical WNBA fines for technical fouls or such are about half the $500 amount the players were fined for wearing the black shirts. WNBA rookies like New York's Adut Bulgak make roughly $40,000, so the fine is about 1/80th of a first-year players' salary.

The Liberty have worn the plain black shirts four times, including Wednesday morning against Washington. They didn't wear them on Thursday in their matinee game against the Fever opting for their normal black shirts with the Liberty logo. Tina Charles did wear her warmup shirt inside out.

"After seeing the African American male shot three times after helping an autistic person out this morning in Florida, I knew I couldn't be silent," Charles said after Liberty lost to the Fever. "Knowing the player I am representing this organization, if anybody was going to wear it, it had to be me. I have no problem wearing this shirt inside out for the rest of the season until we are able to have the WNBA support us."

In a show of solidarity, the Liberty and Fever chose only to speak after the game about social awareness, politely declining any questions about Thursday's contest.

Charles is looking forward to discussing future actions at the Olympics, where she'll have a chance to talk with her teammates on the women's national team and NBA players on the U.S. men's team.

"Being able to see how they feel and what they want to do, coming collectively together," Charles said. "Seeing the other 11 WNBA teams, how we basically just did a media blackout, if they are up for doing the same thing."

NBA players previously have taken a stand in support of victims from police brutality without being fined. LeBron James and Derrick Rose wore "I Can't Breathe" shirts in honor of a Staten Island man who died after police placed him a chokehold in 2014. NBA Commissioner Adam Silver said in a statement after the players wore those shirts supporting the players for their personal views but preferring they adhered to on-court attire rules.

No NBA players wore the "I Can't Breathe" shirts after Silver's statements.

The WNBA fined players after they ignored a league memo earlier this week to the teams reminding them of the uniform policy. The memo was sent out after Minnesota, New York and Dallas players wore shirts in remembrance of two men who were shot by police and the five Dallas police officers who were killed in an attack on July 7.

The Lynx only wore their shirts once and said they will shift their focus to addressing the issue in other ways. After wearing shirts with the hashtag "Black Lives Matter" and "Dallas5" for one game, the Liberty reached what the players said was a compromise, wearing plain black shirts bearing only the Adidas logo. For now they are back to wearing their normal warm ups.

The league will go on a monthlong Olympic hiatus beginning Saturday but January said players will continue to actively engage in the social discussion.

"I think there's a lot of people in our league who are very passionate about it. As a player rep we are going to continue having these conversations," she said. "The timing of them releasing the statement and giving us the papers was very timely on their part."