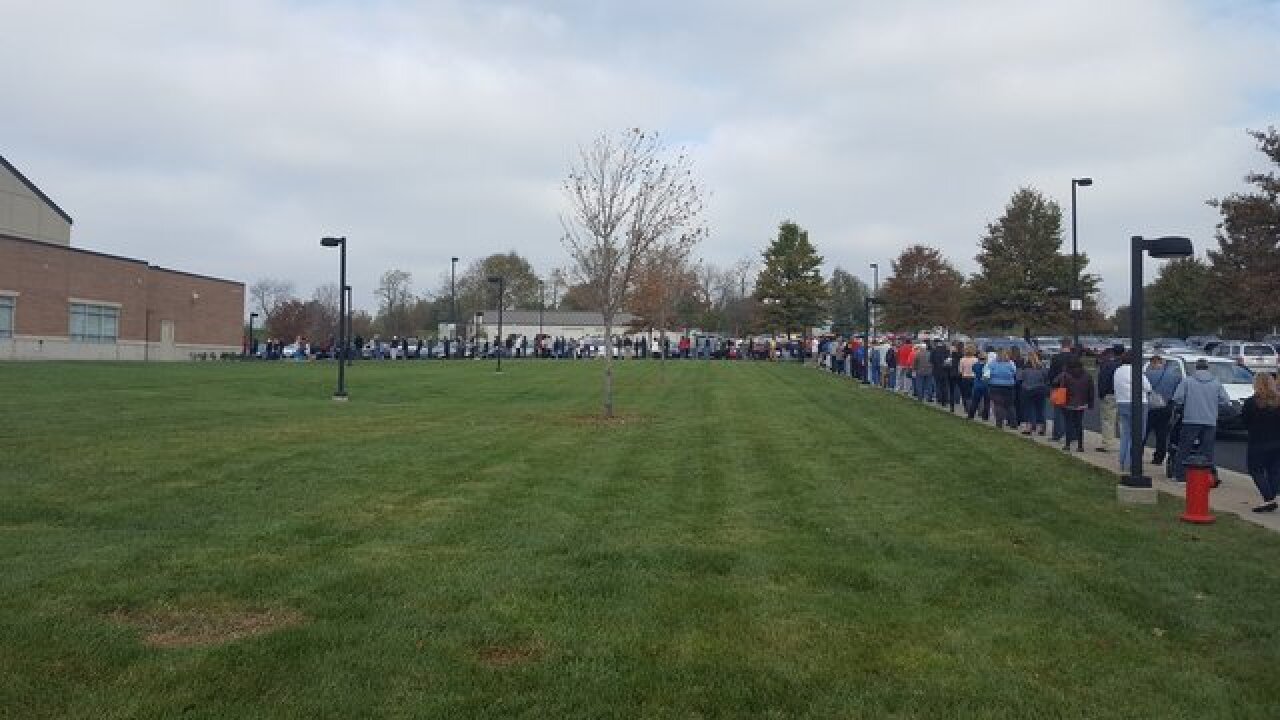 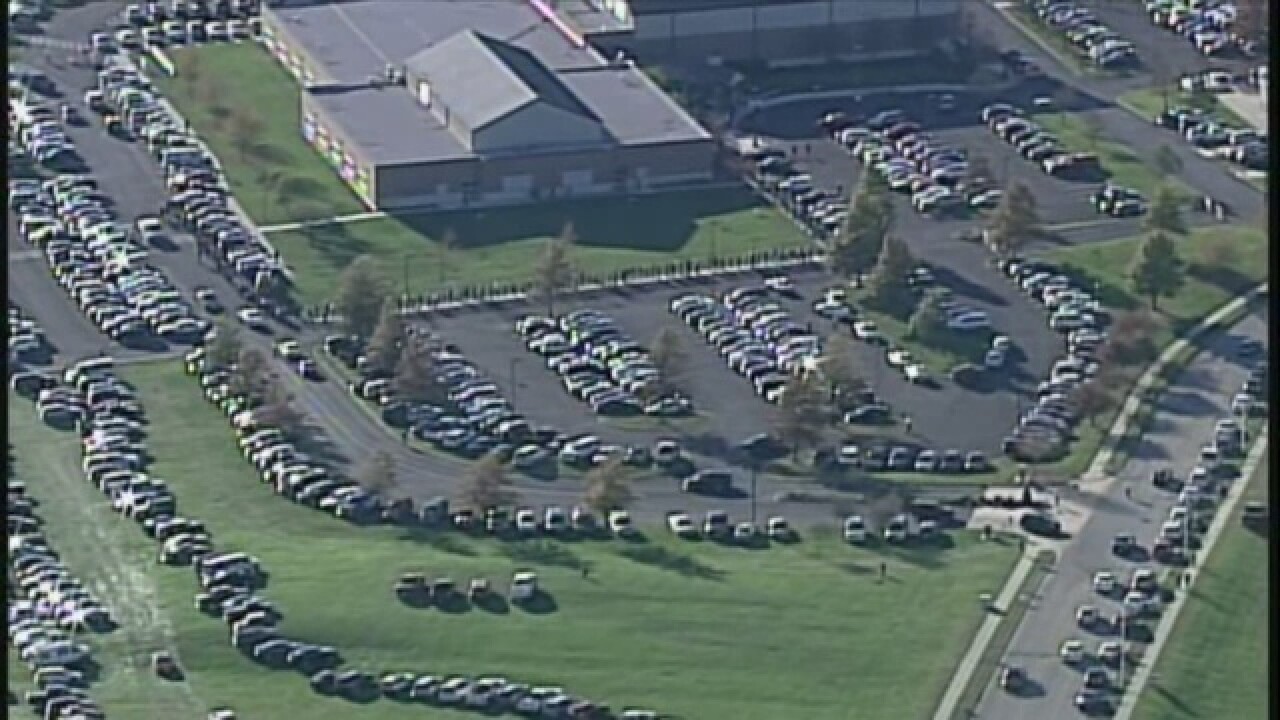 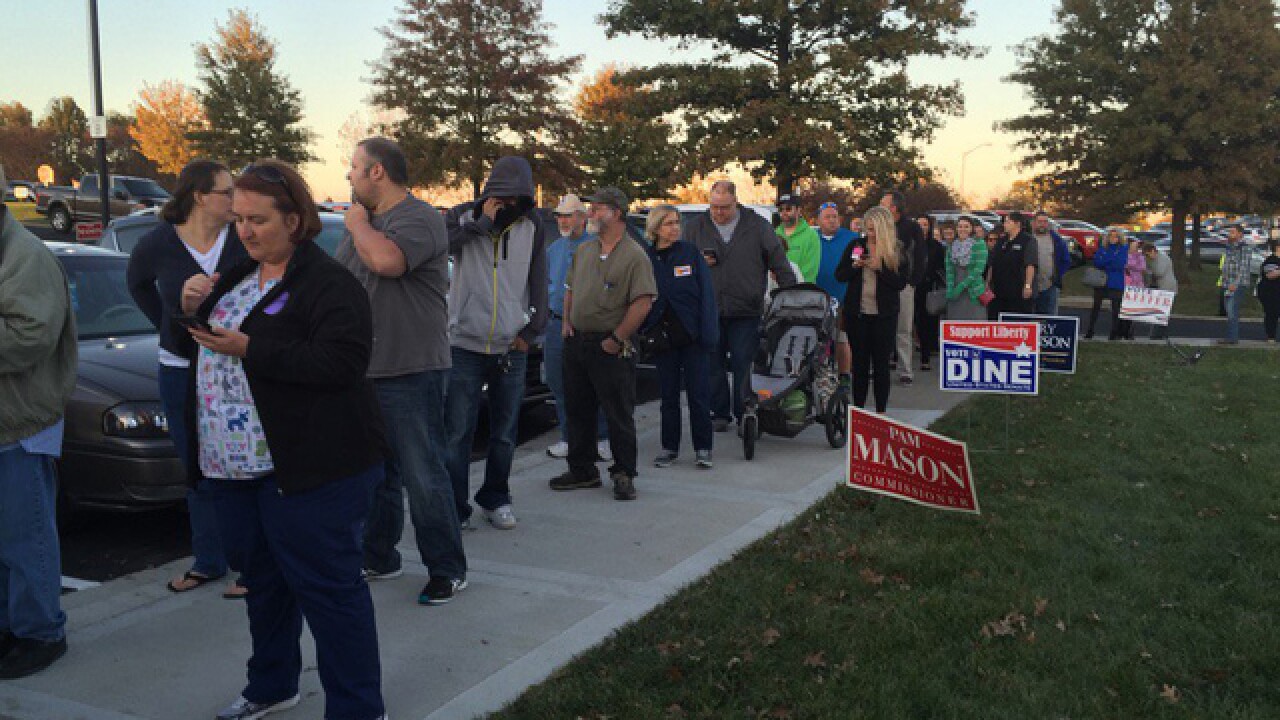 We are continuously updating this story with the latest information from various polling locations. Please check back for updates.

KANSAS CITY, Mo. - Across the Kansas City metro, Missouri and Kansas voters exercised their civic duty at the polls on Election Day.

Since Missouri doesn't have early voting, many Show Me State voters braved long lines to cast their ballots on Tuesday.

On Tuesday afternoon, the line to vote wrapped around the building at the Northland Cathedral. One voter told 41 Action News she waited two and a half hours to vote.

Some voters waited for hours outside the building and waited about 45 more minutes once they got inside.

One voter said the wait time was a testament to why Missouri should have early voting.

Volunteers who worked the last two presidential elections at the Northland Cathedral said they have never seen this many people.

Voters waited an average of an hour and a half at Lee's Summit City Hall to vote. It was a constant line of people as opposed to Kansas City, Missouri, where voters came in waves. Two factors that contributed to the constant line in Lee's Summit were the expected large turnout and two precincts were combined.

While Lee's Summit voters waited in line, a local pizzeria stopped by and handed out slices of pizza.

The extended wait was expected for such an anticipated 2016 election, but that didn't deter voters from expressing their discontent on social media about long lines at their polling stations.

@41ActionNews good morning, looks like all of the Lee's Summit voters and then some are out. pic.twitter.com/pw0B9QjKN7

Been in line for 1 hour in Blue Springs. Getting close now. @41ActionNews #Election2016 #ElectionDay pic.twitter.com/H4P3j4GC1A

By 7:40 the #voting line has died down considerably @ #LeesSummit Christian. Here's a new time lapse. Thanks @JakesTakes ??????@41ActionNews pic.twitter.com/54YhsyFt7i

Four separate polling places in Blue Springs, Lee's Summit and KCMO have experienced problems with its paper ballot boxes. The machines that read ballots have had issues with counting votes, so voters were instructed to put their ballots in sealed envelopes into a separate box to be counted later.

A line of voters looped around the Rosedale Mennonite Church in Kansas City, Kansas.

One voter who was waiting in line said he's glad everyone came out to vote.

Voters started to line up there at 5 a.m., one hour before the polls opened.

That was Oscar Ring’s mindset. He remembered voting at the primaries around 10 a.m., when he saw long lines.  But, it was nothing like this.

“I thought if I got here early it wouldn't be this long of a line. It’s really surprising me,” said Ring.

One voter 41 Action News spoke to in a live interview pointed at the line and said, “See, this is why Lee’s Summit needs early voting.”

In fact, Frank and Cynthia Bommarito have never seen lines this long for the election.

Bommarito was stationed in Germany with the Army for 20 years and voted mail in all that time.

“This is quite a big change,” said Bommarito.  “I've never seen it... in the Army you always wait in line, but not like this. Even for the Army standards is kind of long, which is amazing.”

Another way to cut down on voting time is to come prepared on the issues and candidates you would like to select.  Brown said people can get through in 10 or 15 minutes, but if they are not prepared they are taking twice that time.

Jackson County’s ballot is 8.5 inches b 17 inches and is two-sided.  “All the issues are important.  It is a long ballot. We've got constitutionals, we've got statutory. Lee's Summit has a question,” said Brown.

Absentee voter lines reached out the door at an Independence polling location on Monday.  Staff and volunteers were dealing with many last minute preparations.

“If we can get the phone put down long enough, we've got to get the deputies trained today. We're doing judge training for those who have canceled already,”said Brown about the day’s duties.  She also said at close of business on Monday, they give the names of all the absentee voters to polling locations so no one is able to vote twice.

Brown is just hoping there will not have to be a recount on any issues or races. “Missouri always worries me because it's a toss up state. We're 50/50. Even on questions we've had to have recounts. Holding our fingers whoever wins the margin will be wide,” said Brown, who said the long process involves touching and counting every ballot.

On the other side of the state border, Kansas voters experienced much shorter wait times since many people have already casted an early ballot or absentee.

Lines aren't long here at Sylvester Powell in Mission. It's a breeze getting in & out.

Voters were able to get in and out of the polling location within minutes.

The supervising judge said there were over 100 people within the first hour.

4 mins til! Line at Sylvester Powell in Mission #ElectionDay pic.twitter.com/Rb746uh58l

Some people were nervous about casting their vote, others were glad to get it over with.

The long wait at one Kansas City area polling location has dropped significantly.
Voters had been waiting about three and a half hours to cast ballots at Northland Cathedral Church in north Kansas City earlier Tuesday.
The church has five precincts voting there, and one of the precincts has the largest population and is voting in the smallest room with five booths. Election officials said the delays could also be attributed to heavy turnout and a lengthy ballot.
Patty Lamb, Republican director for the Clay County Election Board, said at about 7 p.m. that voters were waiting about an hour. She says they added poll workers and other equipment to help speed things along, and anyone who was in line by 7 p.m. will be able to vote.