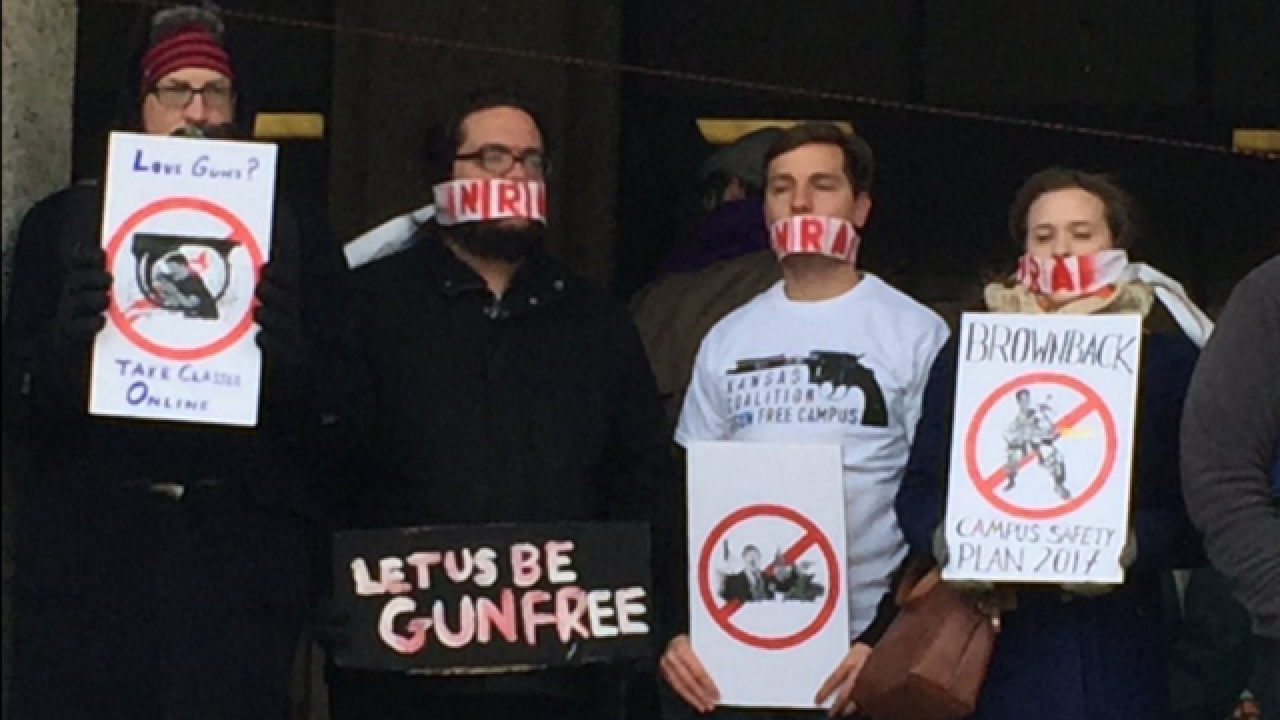 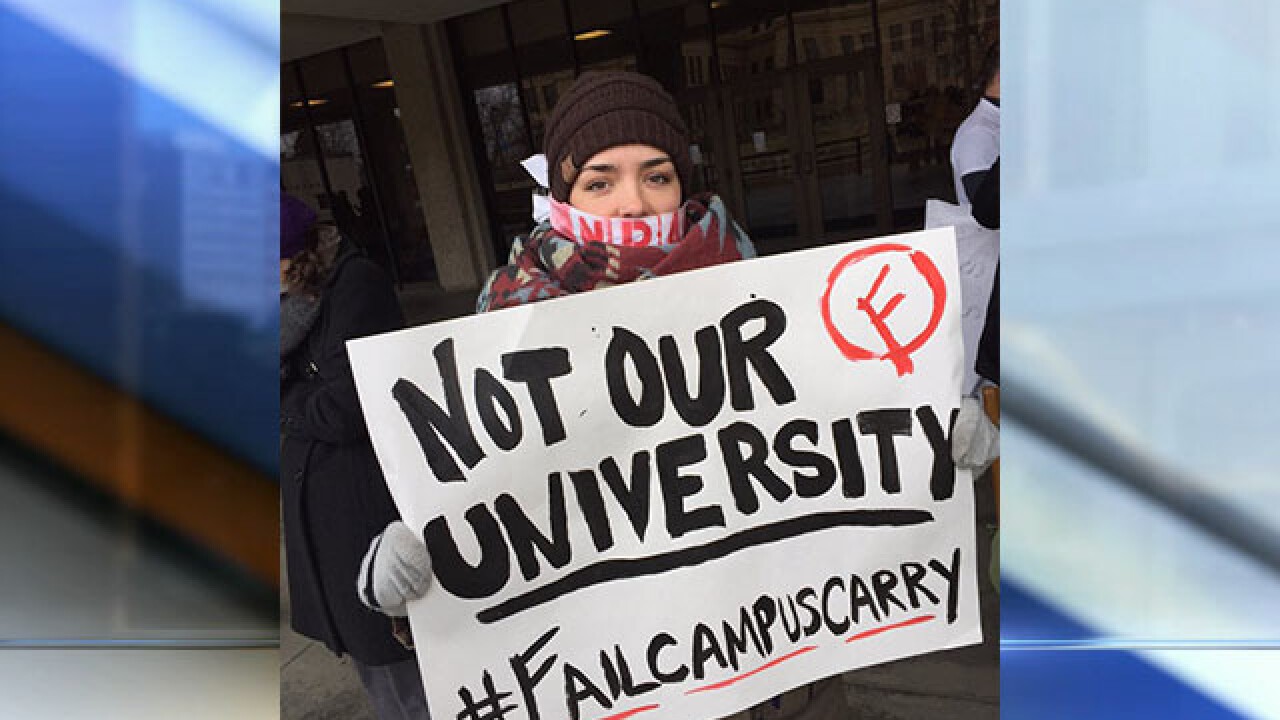 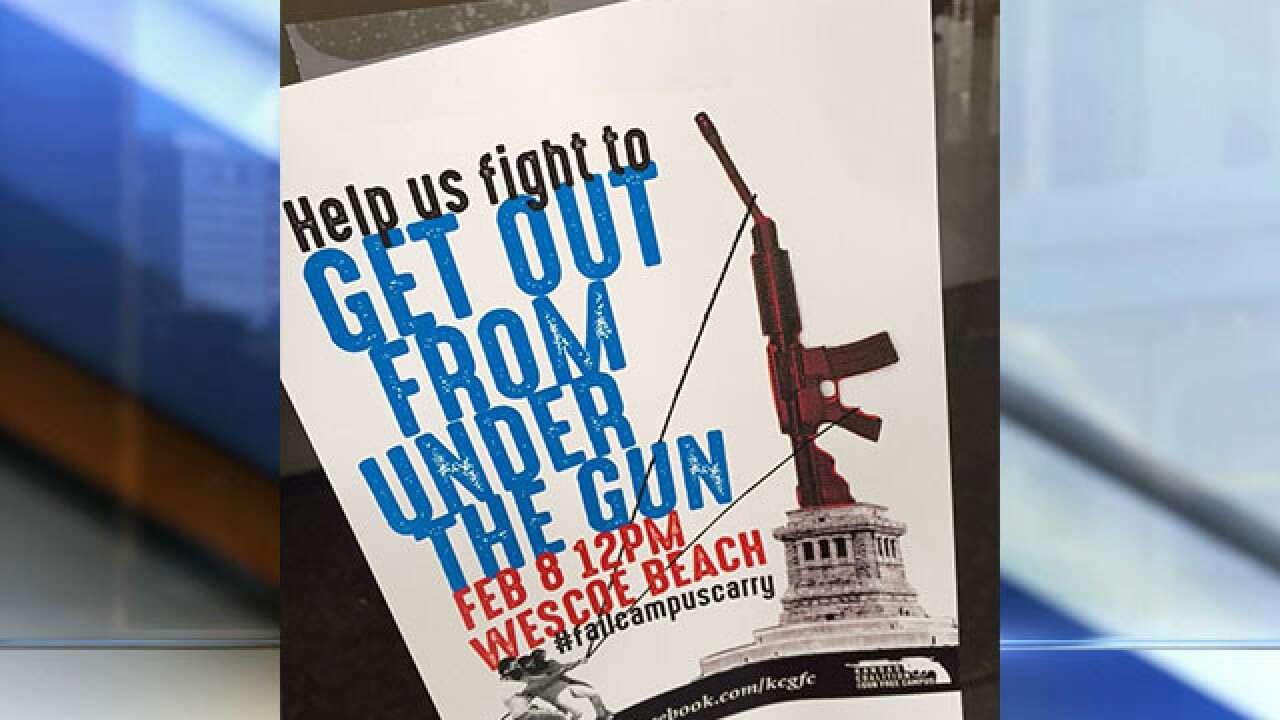 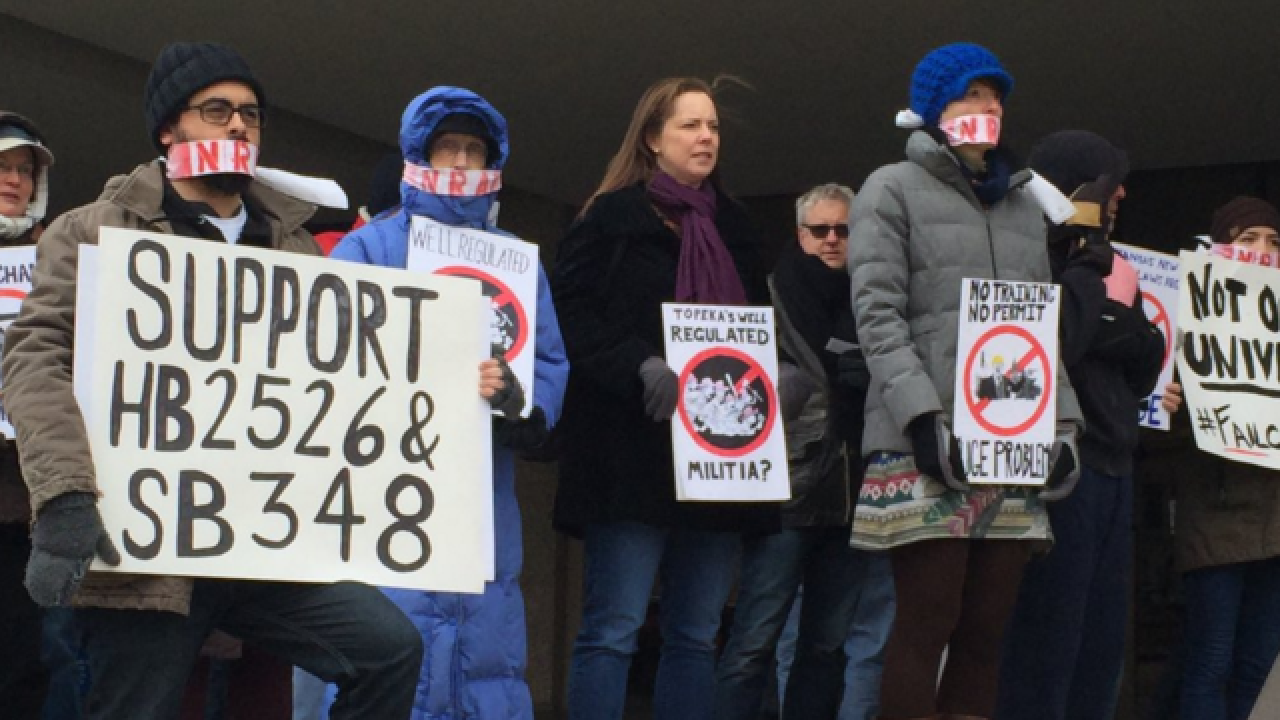 A 75-person strong crowd braved strong winds to protest a prevailing law that will allow concealed guns to be carried on public university campuses across Kansas in 2017.

Many protesters have a NRA cloth around their mouths. They say it symbolizes their voices silenced by gun lobbyists. pic.twitter.com/iNRtv1hSiR

“We don’t feel that it’s conducive to academic discourse,” said graduate student and Kansas Coalition for a Gun Free Campus Co-President Meagen Youngdahl. “The mere presence of firearms or perceived presence of firearms creates an environment of fear and intimidation that makes it impossible to have real open discourse.”

On the steps of Wescoe Hall, the crowd consisting of the University of Kansas, Kansas State, Washburn University and Fort Hays State University staff and students stood silently.

“Limiting our academic freedom and academic discourse, our state legislators and the gun lobby are silencing us, so our silent protests is symbolic of that,” said Youngdahl.

Their signs and the cloth wrapped around some of their mouths made their cause clear.

Painted in red on a white cloth wrapped around many protesters mouths were the letters N-R-A. One sign showing an image of Donald Trump holding a handgun inside a prohibited circle read: “No training, No permit, Huge Problem.”

Youngdahl says the impending law threatens the quality of education in Kansas because professors and students will choose to go out of state when the campuses become carry-friendly.

Kansas State professor and protester Elizabeth Dodd says she is considering her options.

“Of course I’ve considered it. I can’t quite believe this is happening in a state where I’ve lived for over a quarter of a century. I do consider it home. I consider Kansas State my home,” said Dodd. “I think my responsibility right now is to try to keep a really bad idea from changing fundamentally what my academic home does.”

Proponents of the legislation say shootings on “gun-free” campuses show that bans on guns only disarm law-abiding citizens.

With a pro-gun dominated legislature in both the Kansas Senate and the House as well as the governor’s office, it seems unlikely that the law will be stopped by July 2017, however Youngdahl and Dodd remain hopeful.

“I think we do have a shot. I think people are afraid to stand against guns because they’re guns. They can kill you. And often, though not always the ones who want to carry guns are aggressive,” said Youngdahl. “We feel that the more we gather like this, the more people will feel courageous enough to come out of the woodwork and stand with us.”

“I’m still hopeful our board of regents and our legislators will not only listen to the gun lobby but will listen to the people who do the work at the universities and the people who come there to study,” said Dodd. “Police who are trained to respond will shoot whoever has a gun. I’m concerned my students will be injured. Not necessarily by outsiders, by rightful law enforcement attempting to deal with situations on campuses.”

There currently are two bills in the Kansas legislature that would make public universities exempt from having to allow concealed carry: House Bill 2526 and Senate Bill 348. Neither have been scheduled for a committee hearing.