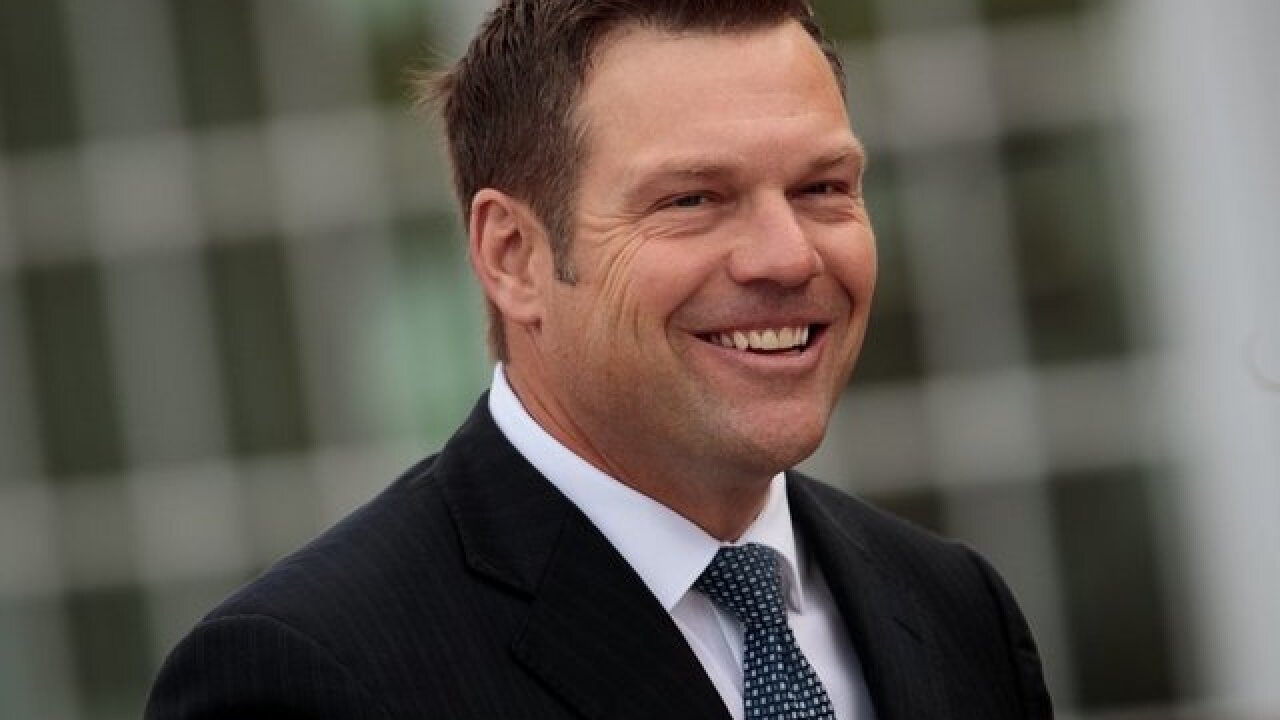 TOPEKA, Kan. (AP) — A liberal Kansas activist is challenging Secretary of State Kris Kobach's right to appear as the Republican nominee for governor on the November ballot, alleging that perhaps hundreds of legally cast ballots were not counted in his close primary race with Gov. Jeff Colyer.

Davis Hammet, of Topeka, filed an objection Thursday to Kobach's nomination with the secretary of state's office. His filing, a little more than a page long, asks to have ballots "illegally rejected" by county election officials unsealed and counted.

"There are hundreds of votes that they didn't count that legally should have been counted," Hammet said after filing the objection. "All they have to do is decertify the election and go open those ballots, so that we can find out what the real election results were."

Kobach defeated Colyer in the August primary by 343 votes, a minuscule margin with more than 317,000 ballots counted. Hammet's filing will force a three-member, all-GOP state board — Kobach, Colyer's lieutenant governor and the attorney general, or their deputies — to consider the allegations.

He faces Democratic state Sen. Laura Kelly, of Topeka, and independent candidate Greg Orman, a Kansas City-area businessman, in what is expected to be a close and contentious general election race.

As for Hammet's objection, Kobach spokeswoman Danedri Herbert said in an email: "Kris Kobach is focused on providing a quality education for Kansas students and bringing back jobs for hard-working Kansans."

The Kansas secretary of state is nationally known for advocating tough immigration and voter identification policies and served as vice chairman of President Donald Trump's now-disbanded commission on election fraud.

He faces a potential investigation of his handling of voter registrations by a citizen-called grand jury in Douglas County, a liberal bastion that is home to the University of Kansas. He's also been enmeshed in multiple lawsuits over a state law requiring new voters to provide proof of their U.S. citizenship that was struck down by a federal judge earlier this year.

Hammet said he's filing his objection as a citizen under a law that allows a registered voter to object to a candidate's listing on the ballot. He is the founder and president of Loud Light, a left-leaning group that registers young voters that has criticized Kobach and other Republicans.

He is raising issues that some Colyer supporters did during the first days after the primary. Those issues include whether local election workers denied unaffiliated voters their right under state law to affiliate with the GOP at the polls and vote in the primary and whether election officials were overly strict in rejecting some provisional ballots.

But Hammet's objection does not contain specific examples of problems, only broad statements that state laws were violated.

Colyer conceded defeat a week after the election after county officials had reviewed most late mail-in and provisional ballots. He then immediately endorsed Kobach.

"Gov. Colyer has been vocal in his support of Secretary Kobach as the Republican candidate for governor, and that has not changed," Colyer spokesman Daniel Seitz said.