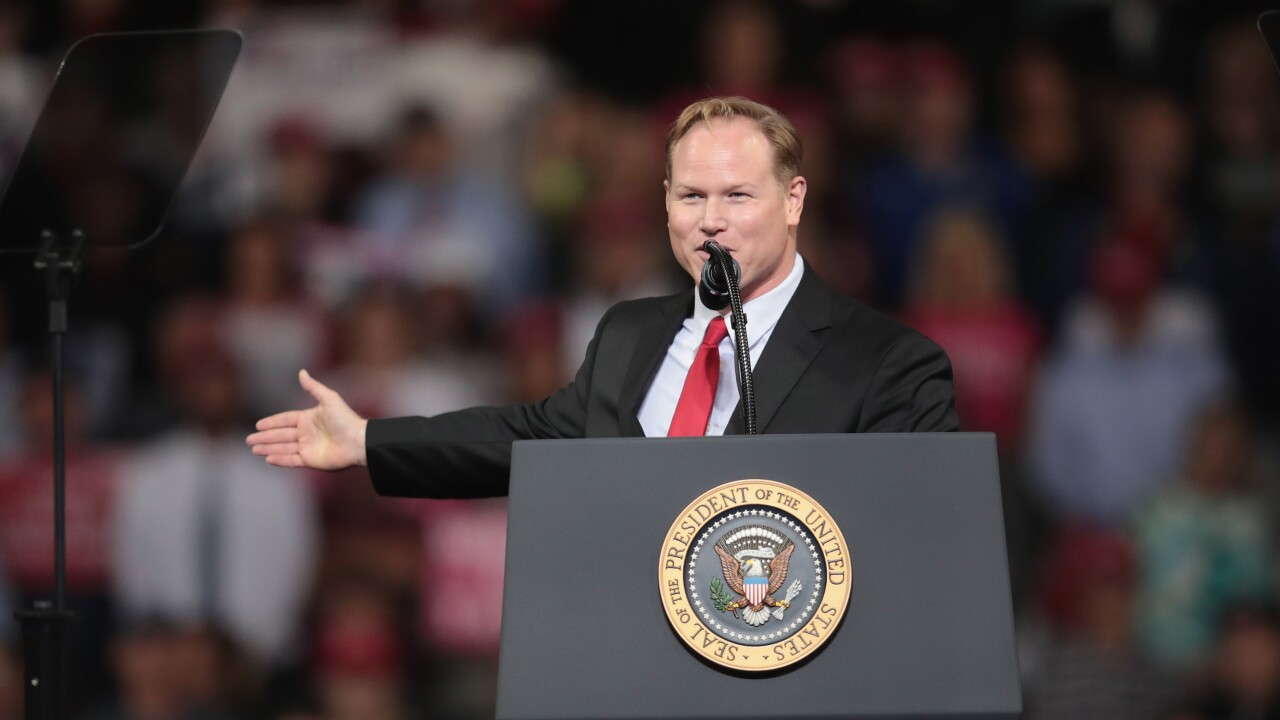 TOPEKA, Kan. (AP) — Former Kansas Republican Gov. Jeff Colyer on Tuesday urged the state treasurer to drop his Senate bid and instead challenge freshman Rep. Steve Watkins in the GOP primary, arguing the move would help "nominate a candidate that can win."

Colyer's public opposition to a congressman from his own party came less than a week after Watkins, responding to internet rumors and speculation, tweeted that he was not resigning: "Let me get this straight.. I have to deny a resignation that no one called for. Got it. Done. K, going back to work. See you in November."

Colyer issued a statement saying the eastern Kansas district's voters are "solid, conservative folks" who deserve to be represented by someone sharing their values.

Colyer spokesman Colton Gibson said Colyer is not taking issue with Watkins on any policy issues but is concerned about "keeping the seat in Republican hands."

The former governor argued that if Treasurer Jake LaTurner were to drop out of next year's Senate race and run for the eastern Kansas seat, it would both give the state "an improved" candidate for House and help "clear the logjam" for Senate.

Colyer served as governor in 2018, after being elevated from lieutenant governor when then-Gov. Sam Brownback resigned to take an ambassador's post. He narrowly lost the GOP gubernatorial primary last year to then-Secretary of State Kris Kobach, known for his anti-immigration policies. Kobach lost the general election to Democrat Laura Kelly.

Kobach is running for the Senate, and some Republicans fear that the already crowded field — with LaTurner and at least five other candidates or prospective GOP candidates — will give Kobach an edge in winning the nomination and possibly risk losing the seat to a Democrat.

Watkins is a former Army officer and military contractor who won the seat in 2018 by less than a percentage point as a political unknown after emerging from a crowded Republican primary. President Donald Trump carried the district easily in 2016.

After a town hall meeting Monday in Topeka, Watkins declined to explain the tweet dismissing speculation that he could resign.

"I'm going to do my job to the best of my ability," he said as he left the event.

Watkins' spokesman and LaTurner's campaign did not immediately return messages seeking comment about Colyer's statement.
LaTurner, who has served as treasurer since 2017, jumped into the Senate race within days of four-term Republican Sen. Pat Roberts' announcement in January that he would not seek re-election in 2020.

Colyer noted in his statement that LaTurner had nearly $470,000 in his Senate campaign fund at the end of June — while Watkins reported having about $260,000.

But when Watkins ran last year, his father, a Topeka physician, was the almost-exclusive source of funding for a political action committee, Kansans Can Do Anything, created to boost his son's candidacy. The elder Watkins contributed nearly $766,000 to the PAC.