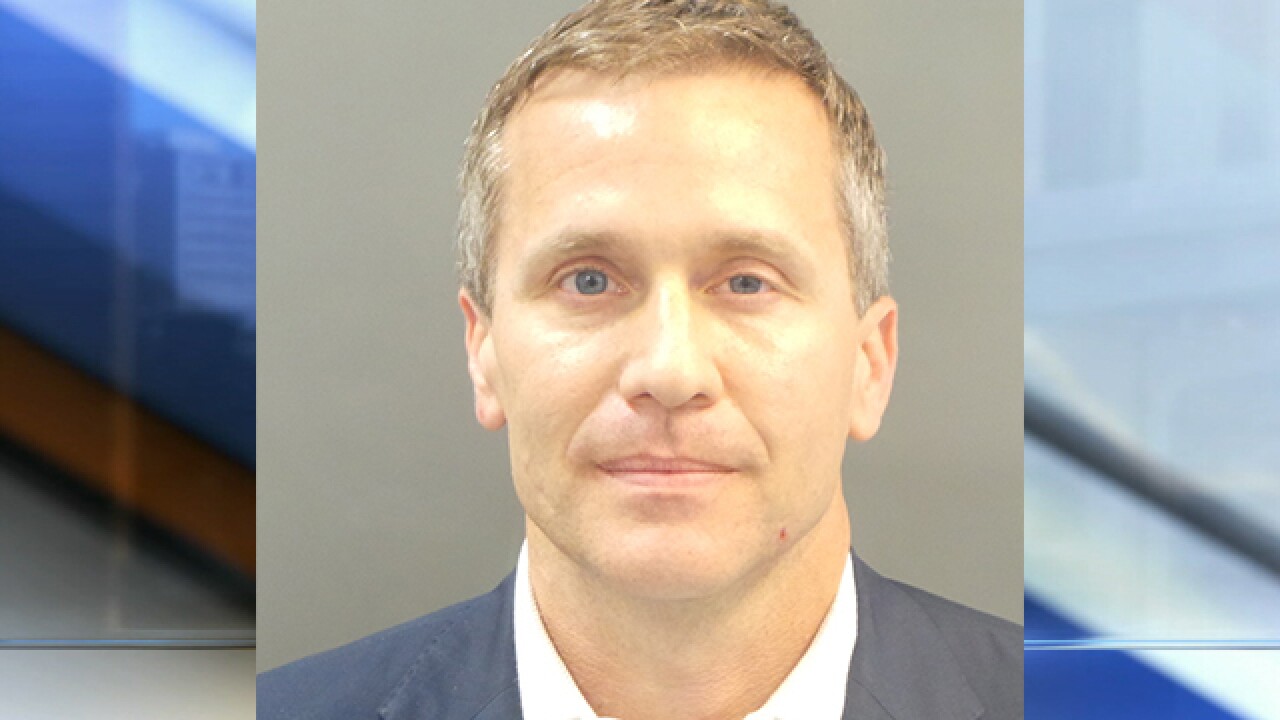 KANSAS CITY, Mo. — Missouri Gov. Eric Greitens has been indicted by a grand jury in St. Louis on a felony invasion of privacy charge.

The St. Louis City Attorney's Office confirmed Greitens was taken into custody by police in St. Louis. NBC station KSDK in St. Louis reports that a judge granted his release.

The governor will appear in court on March 16, according to court records.

Court documents accuse Greitens of knowingly photographing an unidentified person in a state of partial or full nudity without consent and when the victim would have had a reasonable expectation of privacy. The incident allegedly occurred on March 21, 2015.

Greitens denied the claims in the charges in a statement sent to 41 Action News.

As I have said before, I made a personal mistake before I was Governor. I did not commit a crime.

With today’s disappointing and misguided political decision, my confidence in our prosecutorial system is shaken, but not broken. I know this will be righted soon.

The people of Missouri deserve better than a reckless liberal prosecutor who uses her office to score political points.

I look forward to the legal remedies to reverse this action.

This will not for a moment deter me from doing the important work of the great people of Missouri.

St. Louis Circuit Attorney Susan C. Ryan put out another statement Thursday evening claiming that the governor's attorney contacted her office and requested a "secret" meeting to explain the "human" side of the story. That statement can be read in full below:

Despite the Governor’s personal attacks, the Circuit Attorney believes the courtroom is the appropriate place to argue the facts, not the media. Kim Gardner maintains her unwavering confidence in our system of justice to bring this matter to a fair and just resolution.

If convicted, Greitens could face up to four years in prison.

Last month, Greitens admitted to having an affair with a woman in March 2015.

In a statement to 41 Action News, Greitens's attorney, Edward L. Dowd, Jr. said he intended to file a motion to dismiss the charges.

“We welcome reviewing this issue with the independent, bipartisan committee of the Missouri House of Representatives.

For 40 years as an attorney for the public and for private litigants, I have never seen anything like this. The charges are unfounded and baseless. The Governor is absolutely innocent. Not only is he presumed innocent – he is innocent. This whole investigation is completely unusual.

This statute has never been used like this in Missouri history. In unprecedented fashion, the Circuit Attorney circumvented the local police force and hired her own investigators - we attempted to meet with the Circuit Attorney and make the Governor available to discuss the issues. They refused. She proceeded to file an indictment that has no facts.

We will work with the committee. We will be deposing witnesses and will be happy to share information with you with the Court’s permission.”

An attorney representing the ex-husband of the woman Greitens had an affair with sent out a statement after news of the charges broke.

“Lady justice can sometimes operate in cumbersome ways," said attorney Al Watkins. "But right now we have an individual charged with a felony and in our great land, one must presume innocence until guilt has been proven beyond a reasonable doubt. It’s best to let the system take its course.”

Watkins said his client wants to "put things in the rear view mirror" and move on.

Several #MO lawmakers are calling for @EricGreitens resignation again, including Rep. DaRon McGee from KC. We met him at a convenience store on our way to St. Louis/ on his way back from Jefferson City. @41actionnews pic.twitter.com/7v4ge0IAYK

Speaker of the House Todd Richardson, Speaker Pro Tem Elijah Haahr, and Majority Floor Leader Rob Vescovo released a joint statement on the charges saying they will consider if the governor can lead the state while facing a felony charge.

“We will carefully examine the facts contained in the indictment and answer the question as to whether or not the governor can lead our state while a felony case moves forward.  The people of Missouri deserve no less.  We will begin the process of tasking a group of legislators to investigate these serious charges.”

"It will be extremely difficult for the governor to effectively do his job with a felony indictment hanging over his head. While the criminal justice system must run its course, the governor needs to consider whether remaining in office under these circumstances is the right thing to do for not only himself and his family but for the people of Missouri," said Beatty.

My statement re: the indictment of Governor Greitens. In the best interest of this great state, it is time for him to step aside. #MOLeg pic.twitter.com/ovpQsk6di1

“The charges against Eric Greitens are deeply disturbing and prove he is unfit to hold public office. Following today’s indictment, Governor Greitens should step down immediately. The people of Missouri deserve a governor who can focus full-time on the issues affecting the state.

Here’s our full statement on the recent news re: Governor Greitens ⬇️ pic.twitter.com/QlsRmlgEiv

Investigation launched to determine if Greitens committed crimes in affair