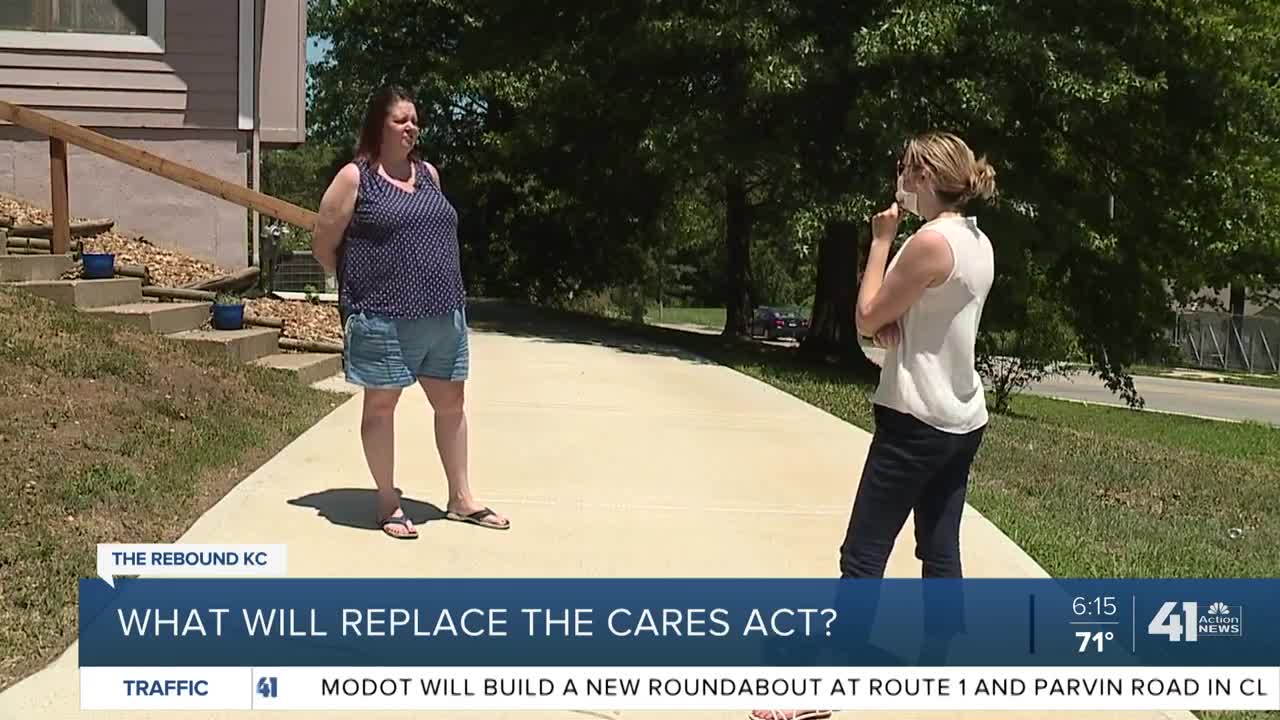 The extra $600 in weekly unemployment is set to expire, and many are worried about what will come next.

KANSAS CITY, Mo. — In less than two weeks, the extra $600 per week in unemployment benefits will disappear.

The loss of additional funds is a cause for panic for many people, like Angela Potter, of Kansas City.

"Everything just literally kind of changed overnight," said Potter, who was furloughed from her job at a shipping company on May 1.

Potter turned to unemployment, and the $600 federal benefit enabled her to finally get ahead of her bills.

"For the first time probably in a long time, all the utilities are 100 percent caught up," she said.

Without the additional funds, she will receive just enough money to pay the rent.

"It would leave me with $16 for the rest of the month," Potter said. "That would need to pay for all of my food, every utility, gas, everything."

Potter and others are wondering what comes next, and the answer varies depending on which side of the aisle and which chamber of Congress one asks.

House Democrats in May passed the HEROES Act, which would extend the $600 payments through January. While Rep. Emanuel Cleaver II (D-Missouri) voted for the legislation, Rep. Sharice Davids (D-Kansas) broke ranks and voted against it because of the lack of bipartisan support.

The HEROES Act is not expected to pass the GOP-led Senate, but Democrats in that chamber unveiled their own plan. It would extend additional benefits until a state's unemployment rate drops, at which point the money would be gradually phased out.

However, Republicans also are unlikely to extend the $600 payments, which some lawmakers said provide a disincentive to return to work.

A report from the nonpartisan Congressional Budget Office found if the CARES Act benefits were extended, five out of six workers would make more on unemployment than they would at their jobs.

The Trump administration's answer involves capping benefits in the next stimulus package.

"You can assume that it will be no more than 100%" of a worker's pay," Treasury Secretary Steve Mnuchin told CNBC.

Meanwhile, Senator Rob Portman (R-Ohio) proposed a $450 per week bonus for people who return to work.

Sen. Josh Hawley (R-Mo.) is pushing legislation that would instead provide rehiring incentives, like payroll support, to employers.

"Unemployment has been a lifesaver for a lot of folks," Hawley said in a July 1 interview with 41 Action News, "but nobody wants to be in the unemployment line longterm. They want to have work, and they want to have the security that goes with work."

Potter, who doesn't know when her furlough will end, has a message for lawmakers about a second stimulus package.

"I want them to know we need it sooner rather than later," she said.

The Senate reconvenes on July 20 and faces an Aug. 7 deadline before another recess.

The 41 Action News I-Team reached out to all four Missouri and Kansas senators for their thoughts on a second stimulus bill.

Here's what they had to say:

Sen. Roy Blunt (R-Mo.): "I expect the next round of coronavirus relief to include direct support for individuals and families and would like to see that support targeted toward people with the greatest need. I also think we need to continue looking at what we can do to help keep people attached to the workforce, as we've done with the Paycheck Protection Program. As chairman of the appropriations subcommittee that funds health, education and labor programs, I will be pushing for additional relief in those areas, particularly in testing and vaccine development, to help get students back to school and businesses up and running."

Sen. Jerry Moran (R-Kan.): "I voted for the first three federal relief packages that included many provisions I would not support in ordinary circumstances, but hospitals needed supplies, small businesses needed loans and folks who were out of work, through no fault of their own, needed relief. I am continuing to evaluate the effectiveness of those first three packages and working to determine which issues still need to be addressed or further addressed, such as supplying PPE to hospitals and developing and eventually distributing a COVID-19 vaccine."

Sen. Pat Roberts (R-Kan.): "The next aid package will center on protecting as many Americans as possible for the virus fallout. My colleagues and I in the Senate are looking at targeted improvements to the CARES Act and other financial measures to protect families, workers and businesses hit hardest by COVID-19. This is not a time for partisanship but for doing what is right for our country."