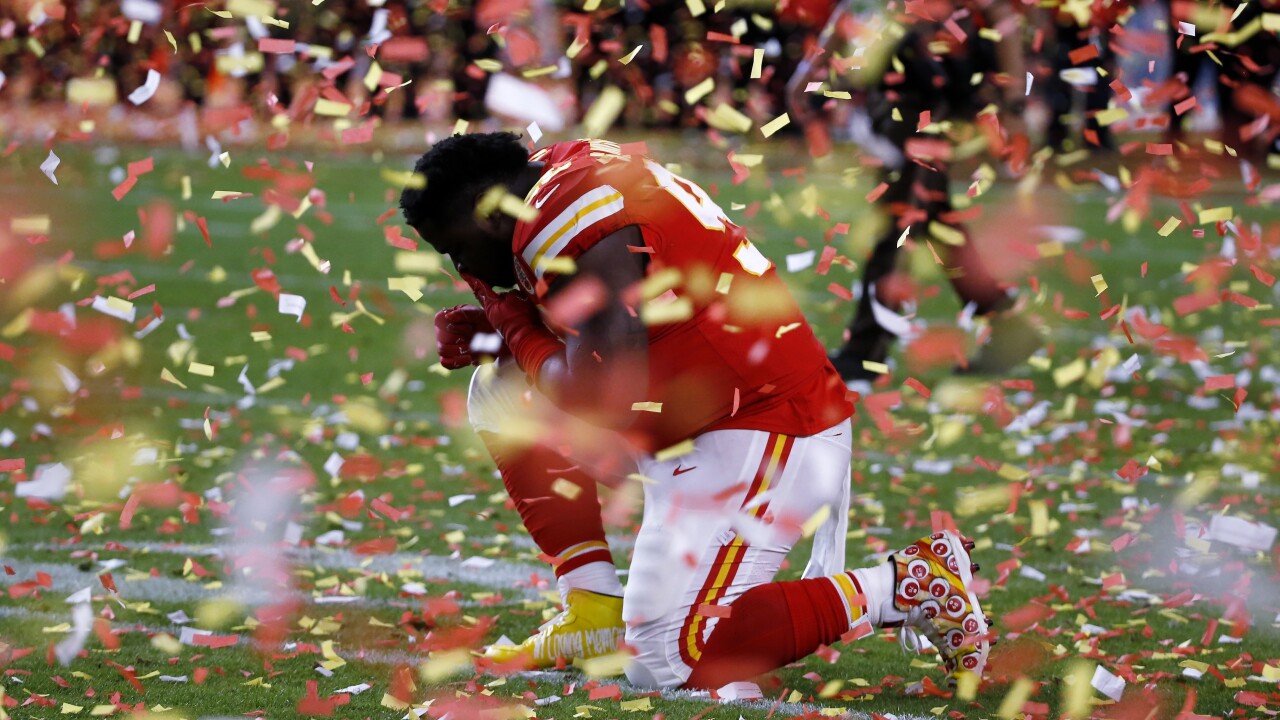 KANSAS CITY, Mo. — It was a championship a half-century in the making.

Here are some nuggets related to the Chiefs' 31-20 victory Sunday against the San Francisco 49ers in Super Bowl LIV. We chose 41, because we're the Home of the Chiefs and it seemed appropriate:

1. Fifty years is the longest span between championships for any franchise in the Super Bowl era, though the Philadelphia Eagles went 57 years between winning the 1960 NFL Championship and Super Bowl LII during the 2017 season.

2. The Chiefs’ 10-point comeback in the fourth quarter is tied for the second largest comeback win in Super Bowl history.

3. The Chiefs are now one of 13 NFL teams with multiple Super Bowl titles.

4. The Chiefs at 2-1 overall — lost Super Bowl I before winning Super Bowls IV and LIV — are also one of 13 NFL teams with a winning record in the Super Bowl.

5. Kansas City trailed by at least 10 points in all three postseason games, becoming the first team in NFL history to produce three double-digit comeback wins — 24-0 to the Houston Texans in the AFC Divisional Round, down 10-0 and 17-7 against the Tennessee Titans in the AFC Championship Game and down 20-10 midway through the fourth quarter against the San Francisco 49ers in the Super Bowl.

6. Chiefs coach Andy Reid waited 15 years after losing a Super Bowl to return and win it, the second-longest span for any Super Bowl-winning head coach. He trails only Dick Vermeil, who lost Super Bowl XV with the Eagles then won Super Bowl XXXIV with the St. Lous Rams 19 years later.

10. Mahomes is the second-youngest quarterback in NFL history to win the Super Bowl.

11. Both Allen, who finished his career with the Chiefs, and Swann have been inducted into the Pro Football Hall of Fame.

14. Mahomes’ 10 passing touchdowns in the 2019 postseason, including two Super Bowl LIV, are tied for the fourth-most by any QB in a single postseason in NFL history.

15. Running back Damien Williams’ two fourth-quarter touchdowns tied the Super Bowl record for most touchdowns in a single quarter in NFL history.

16. Williams now has six career postseason rushing touchdowns, twice as many as any other player in Chiefs history.

19. Tight end Travis Kelce caught his sixth career touchdown pass, which extends his Chiefs record for the most touchdown receptions in team history.

20. Williams caught the go-ahead touchdown pass in the fourth quarter, giving him four postseason TD receptions in his Chiefs career — second most in franchise history.

21. Kelce’s six total postseason touchdowns trails only Williams for the most in Chiefs history.

22. With 104 yards rushing, including the game-clinching 38-yard touchdown run in the closing minutes of Super Bowl LIV, Williams now has 355 career postseason rushing yards — second most in Chiefs history behind Marcus Allen (386 yards in six games).

23. Williams is the only Chiefs player in franchise history with multiple 100-yard rushing performances in the postseason.

24. Williams’ 60 career postseason points scored are the most in Chiefs history.

26. Butker now has twice as many extra points (26) as any kicker in Chiefs history.

27. Butker’s 15 extra points made during the 2019 postseason are tied for the fourth-most in NFL history.

29. Punter Dustin Colquitt extended his Chiefs record, appearing in his 12th career postseason game. No other player has more than 10.

31. Colquitt’s 45.1-yard average per punt, including a 50-yard average in Super Bowl LIV, is also the best in Chiefs history (minimum 20 punts).

32. Defensive end Frank Clark’s fourth-quarter sack gave him 5.0 for the 2019 postseason, which is the most in any single postseason for any player in Chiefs history. Neil Smith’s 3.0 sacks during the 1993 season was the previous record.

35. Clark is the sixth Chiefs player in history to record a sack or partial sack in the Super Bowl based on Pro Football Reference’s Super Bowl box scores.

36. Defensive backs Bashaud Breeland and Kendall Fuller are the fifth and sixth players in Chiefs history with an interception in the Super Bowl.

38. The Chiefs-49ers game is the 10th most-watched television program in U.S. history and ranks ninth-highest among Super Bowls.

39. Kansas City’s 55.7 rating (number of households watching) and 89 share (percent of households tuned to program) were the highest for the market since 2014.

40. It was the most live-streamed Super Bowl ever, delivering an average digital audience of 3.4 million viewers.

41. With an average audience of 757,000, Fox Deportes’ coverage of the Super Bowl became the most-watched Spanish-language Super Bowl broadcast in history.