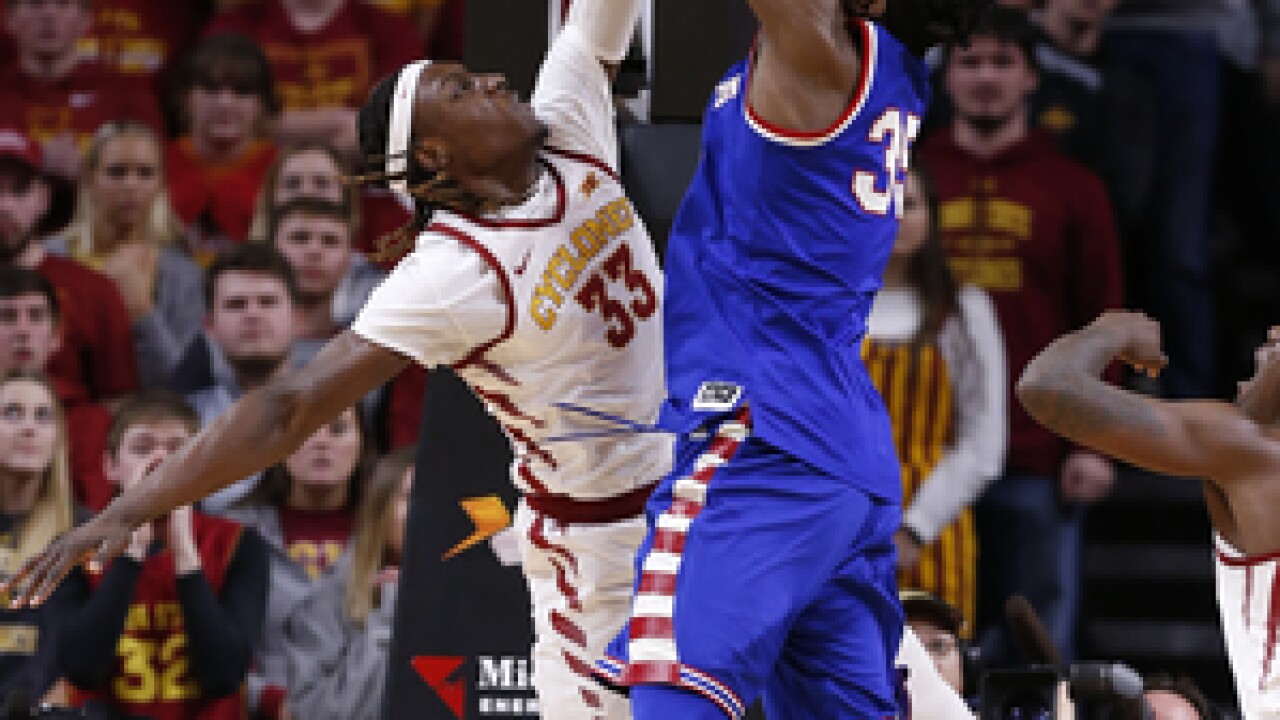 Copyright 2018 Scripps Media, Inc. All rights reserved. This material may not be published, broadcast, rewritten, or redistributed.
David Purdy
<p>AMES, IA - FEBRUARY 13: Solomon Young #33 of the Iowa State Cyclones blocks as Udoka Azubuike #35 of the Kansas Jayhawks takes a shot in the first half of play at Hilton Coliseum on February 13, 2018 in Ames, Iowa. (Photo by David Purdy/Getty Images)</p>

Udoka Azubuike scored 19 points, Malik Newman had 17 and 13th-ranked Kansas bounced back from a brutal loss at Baylor by beating Iowa State 83-77 on Tuesday.

Kansas took a five-point lead into the break after Nick Weiler-Babb's long 3 to end the half was waved off, and it quickly jumped ahead by 11 early in the second half.

The Cyclones chipped away at that deficit at times, even getting as close as three, but the Jayhawks pushed their lead to 76-63 with 4:46 left on back-to-back alley-oop dunks by Azubuike.

That capped a run of six straight makes for the Jayhawks -- who also held Iowa State without a field goal for over four minutes down the stretch.

Freshman Cameron Lard scored 19 points with 11 rebounds for Iowa State (13-12, 4-9). But freshman Lindell Wigginton, who burned the Jayhawks for 27 points in their first meeting, was held to 12 points on 3 of 12 shooting.

Kansas: This was a game KU couldn't afford to lose if it hoped to keep its quest for a 14th straight conference title alive. The Jayhawks' next three games: at home to West Virginia and Oklahoma and on the road at league-leading Texas Tech, will likely determine their fate. Still, seeing the Jayhawks respond in a crucial spot as the season draws to a close is something their Big 12 rivals have seen over and over again.

Iowa State: The Cyclones encountered a Kansas team with something to prove after it got waxed by Baylor 80-64 over the weekend. That's a tough combination to overcome in a rebuilding year -- though Lard's monster game, on the heels of being named Big 12 newcomer of the week on Monday -- was highly encouraging.

Kansas hosts the Mountaineers on Saturday.