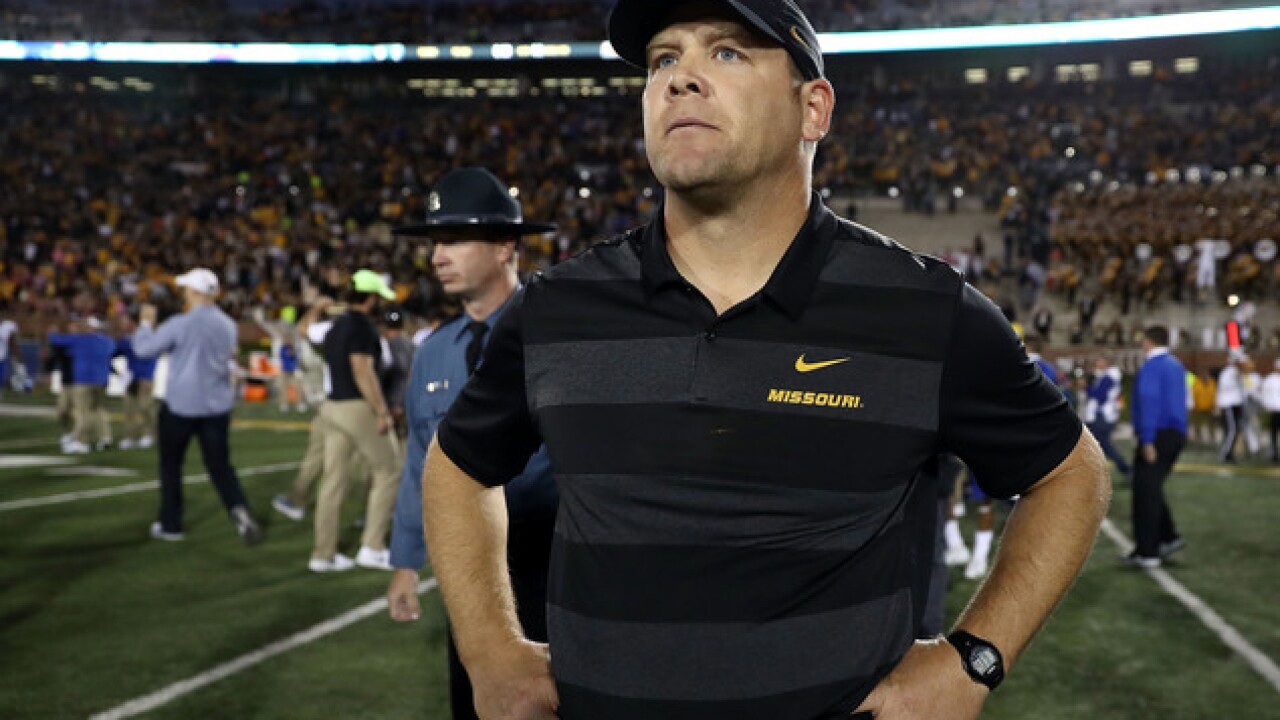 Copyright 2018 Scripps Media, Inc. All rights reserved. This material may not be published, broadcast, rewritten, or redistributed.
Jamie Squire
<p>COLUMBIA, MO - OCTOBER 27: Head coach Barry Odom of the Missouri Tigers stands on the field after the Kentucky Wildcats defeated the Tigers 15-14 to win the game at Faurot Field/Memorial Stadium on October 27, 2018 in Columbia, Missouri. (Photo by Jamie Squire/Getty Images)</p>

Odom’s new contract runs through the 2024 season and he will make $3.05 million per season, which is effectively a two-year extension and $600,000 annual raise.

“Barry Odom has done an outstanding job of leading the Mizzou Football program the last three seasons and I’m grateful that we are able to reward that success today,” MU athletic director Jim Sterk said.  “He is building a championship culture within his program that fosters academic achievement, athletic success and accountability, and I am proud of what he has been able to accomplish during his first three seasons.”

Odom, a former Tigers linebacker who was hired in December 2015 as Gary Pinkel’s successor, went 4-8 in his first season.

The Tigers, who are ranked No. 23 in the College Football Playoff rankings and No. 24 in the latest Associated Press poll, will play Oklahoma State in the AutoZone Liberty Bowl on Dec. 31 in Memphis, Tennessee.

Odom’s extension, which also includes “an enhanced incentive package for academic and athletic performance,” was approved Wednesday afternoon during a special meeting of the University of Missouri System Board of Curators.

“I’m excited and thankful to lead our program and student-athletes for years to come,” Odom said in a statement.  “... I’m excited to move forward with Jim Sterk, we have the same vision in building Mizzou Football and providing a platform for our young men to be successful in all aspects of their lives.
“We have a great staff in place who care about winning the right way and I’m appreciative of their efforts. I’m grateful for our players, and I’m honored to be their coach.  I want to give them the very best every single day.”

Odom, a 1999 MU graduate, is 19-18 in three seasons with each loss coming against a bowl-eligible team. He’s one of four head coaches — along with Dan Devine, Al Onofrio and Warren Powers — to lead the Tigers to a bowl game in two of their first three seasons with the program.

Moving forward, Odom will receive an automatic $150,000 raise annually for each season he leads Mizzou to a bowl game beginning in 2019.

Odom’s teams, which have overcome slow starts each of the last two seasons, are 10-2 in November during the last three seasons.

The new South End Zone facility, a new $100-million football-specific addition to Memorial Stadium, is expected to open next summer.

There’s potential for Odom to receive lots of additional incentives.

Odom also can receive an additional $150,000 for achieving certain academic goals related to team grade-point average, Academic Progress Rate, Graduation Success Rate and student-athlete progress toward a degree. He’s also eligible for an additional $275,000 based on meeting those goals and additional targets related to community service.

Odom was the lowest-paid coach in the SEC in 2018, but he'll make more than Mississippi's Matt Luke ($3 million), Vanderbilt's Derek Mason ($2.8 million) and Mississippi State's Joe Moorhead ($2.6 million) under terms of the new deal.

Odom also now makes more than Tigers men's basketball coach Cuonzo Martin, whose salary this season is $2.8 million in the second year of a seven-year deal worth $3 million per season on average.