Can the Chiefs reprise their road success in Chicago? 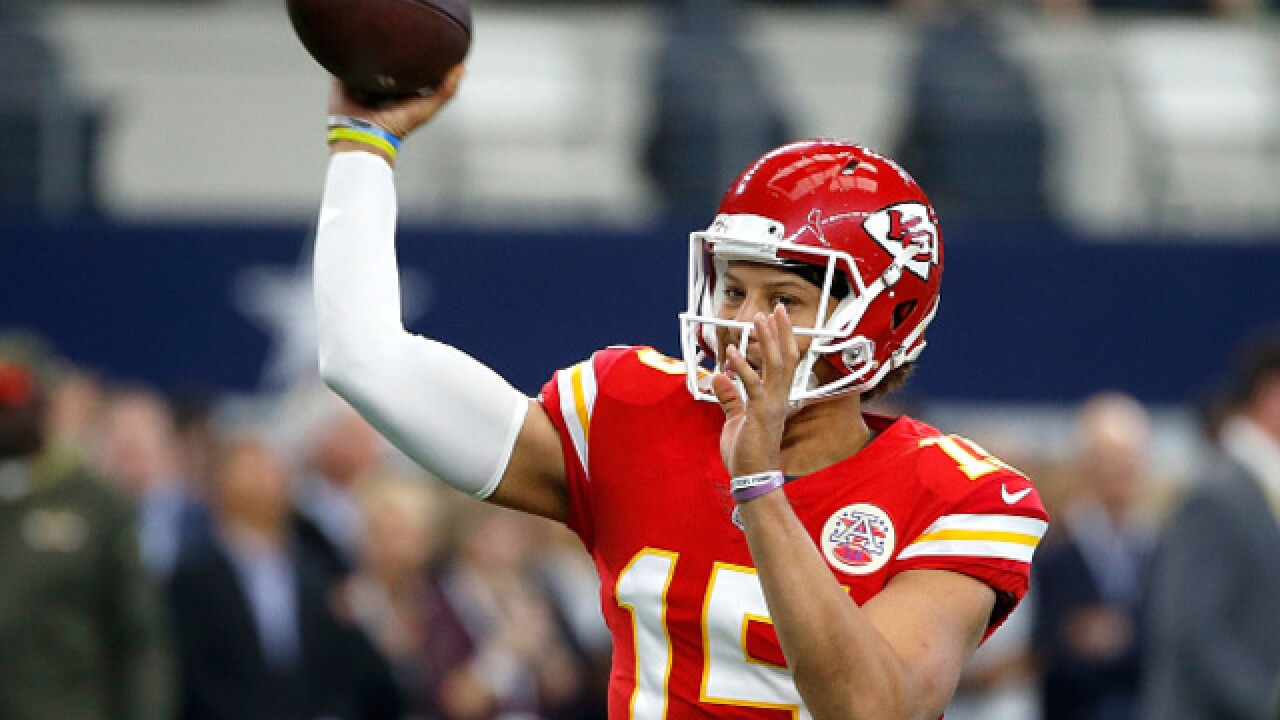 Copyright 2017 Scripps Media, Inc. All rights reserved. This material may not be published, broadcast, rewritten, or redistributed.
Ron Jenkins
<p>ARLINGTON, TX - NOVEMBER 05: Patrick Mahomes #15 of the Kansas City Chiefs warms up before the game against the Dallas Cowboys at AT&amp;T Stadium on November 5, 2017 in Arlington, Texas. (Photo by Ron Jenkins/Getty Images)</p>

Kansas City, Mo. -  The Chiefs' trip to Atlanta was a success on many levels. Their pass protection and quarterback showed growth in the passing game and some players shined in key moments. Here are the encouraging focal points from their trip and some things to keep an eye on in their trip to Chicago.

1. Mahomes shows progress and still has room to grow
Patrick Mahomes showed growth from his first start to second. He looked more comfortable and confident in his drops after the first series. He also found a comfort level in the pocket and moved around well inside the pocket to make his throws.

It was apparent that Mahomes had worked on the strides in his drops and tightened them up, especially on the 69-yard touchdown to Tyreek Hill. Travis Kelce and Mahomes appear to already be on the same page in their timing of the routes and placement. Hill is still working with the quarterback on finding the sync in their timing. Sammy Watkins will need a lot more reps to find the same page in game situations.

Mahomes learned a valuable lesson in the game of the importance of holding and looking off the safety. He stared down Watkins on a vertical route near the seam and the safety followed his eyes to the route. There will be rough patches along the way but Mahomes is rarely making the same mistakes on a week to week basis.

2. Niemann and Williams with strong performances
Two players who were featured in the focal points article last week were inside linebacker Ben Niemann and running back Darrell Williams. Both had strong performances in Atlanta. Niemann showed a veteran skill set in his ability to shed blocks, read the backfield, and instinctively find the correct pursuit angle to close on the ball carrier.

The rookie linebacker does not hesitate in run support or intercepting a pass in coverage. Niemann arguably earned himself a roster spot as the third-best inside linebacker with his complete performance.

Darrell Williams saw a couple opportunities with the first team offense but also found himself with some crucial reps during the second team's performance. Williams shows an aggressive nature at hitting the hole, good vision in the open field, and no wasted movement in getting up field.

He looked natural in pass catching out of the flats and a certain glide in how quickly he covered ground. The rookie running back is making the decision at that position much harder.

3. Defense not as bad as it looked in the opening drives
The run defense appeared to be have massive hiccups in its opening drives in Atlanta. Unfortunately the defense had some issues at the middle linebacker position that let the Falcons exploit the cutback lanes. The edges performed up to task on forcing runs back in to pursuit. Terrance Smith was unable to get off blocks and was late to react on some plays.

Ukeme Eligwe overpursued on multiple runs and took incorrect pursuit angles to eliminate the cutback. Both inside linebackers also had issues in zone coverage, which left voids that the offense exploited. The potential additions of starters Anthony Hitchens and Reggie Ragland against Chicago will likely help settle some of these fundamental issues.

4. Offensive line answers the call but need to settle on their run blocking scheme
The offensive line showed up big during pass protection in Atlanta. They exceeded their previous performance against the Texans with a clean pocket for Mahomes most of the night. The next phase for the offense is to settle on a run scheme. The team at times called for some combination blocking, a blend of zone, and some counters mixed in.

The linemen appeared to shine when they were allowed to perform combination blocking on their run plays. They opened holes for the running backs and the line looked like it was much more of a natural fit in the decision making process. It was also a big part of why the run game succeeded during the second half of the season in their 2015 playoff win campaign. But the guard position looks unsure in zone blocking steps.

Defenders routinely are able to fight across the line's faces, and a lack of push from the line is noticeable. It will be something to keep an eye on in the coming weeks to get the run game jump started. The left guard position also does not appear to be settled yet. The Chiefs have yet to give Parker Ehinger game situation reps there, but Cameron Erving doesn't appear to be the long-term answer unless the staff is willing to commit to combination blocks in the run game.

The team will also have a couple of interesting decisions with Andrew Wylie and Kahlil McKenzie. Wylie performed well in his first crack at a game situation with the first team offense. He looks like a quality power run blocking offensive lineman, can get serious push on double teams, and looked comfortable at the right guard position.

McKenzie still has a ways to go in hand placement and foot work to dominate on most snaps. But his athletic ability and strength shine on each and every play. The two will both be tough to clear waivers, as quality offensive linemen are in high demand around the league.

5. Players who need to make an impact over the next two weeks
The wide receiver group is crowded after the third roster spot. Chris Conley, De'Anthony Thomas, Gehrig Dieter, and Byron Pringle are likely battling for the fourth and fifth spots on the roster. All are arguably capable of working in the slot and special teams, but none of them has clearly distinguished themselves from the group. Jehu Chesson and Marcus Kemp are potentially battling for a sixth or seventh spot with a strong emphasis on special teams.

The outside linebacker competition for a potential fifth spot between Frank Zombo, Tyrone Holmes, and Rob McCray hasn't shown a clear winner at this point. Zombo has a leg up in experience, run support, and special teams ability, while Holmes and McCray have shown more in pass rush ability.

The safety position will continue to be an interesting spot, Eric Berry and Armani Watts should make the roster. Leon McQuay has shown his skill set fits as a strong safety in run support. He shows a natural ability straight line speed, blitzing, and tackling in the open field. On the flip side, he's slow to change direction to explode if put in a single high situation -- but he is capable in two deep coverage to manage half of the field.

Eric Murray still has not distinguished himself. The Chiefs currently lack significant experienced starting ability or depth in single high range if Berry sustains an injury or his heel issues linger.

6. The Mahomes 69-yard touchdown changes the mindset
People are talking about the impressive throw itself.

It is understandable because arguably Brett Favre, Aaron Rodgers, Ben Roethlisberger, and Michael Vick could make a similar throw under the conditions mechanically. And you could debate that Randall Cunningham and Dante Culpepper could make the throw as well.

The impact that is currently ignored about the play is what it does for the mindset of the team itself. Their starting quarterback has now made a game-changing and momentum-shifting throw on a single play in a game situation. The offense now has witnessed that if they run a little bit longer on their route, give a little extra on that block, the play that sparks their offense is there on any given throw.

That can provide a little bit more confidence to the entire roster and coaching staff. One of the bigger struggles of the Andy Reid offenses in Kansas City has been that the players are always looking around for someone to create the spark. They didn't know who it would be from game to game. Mahomes made the first throw in helping create that consistent answer.

The throw is also now on tape for 31 other defensive coordinators to see and respect. The league now officially knows that Mahomes can effortlessly chuck the ball almost 70 yards downfield in a collapsing pocket without fully putting typical quarterback mechanics to work on the throw.

The throw forced coordinators and safeties to respect the deep ball if Mahomes has the time in the pocket. That throw was a statement to the league -- not just an impressive play.