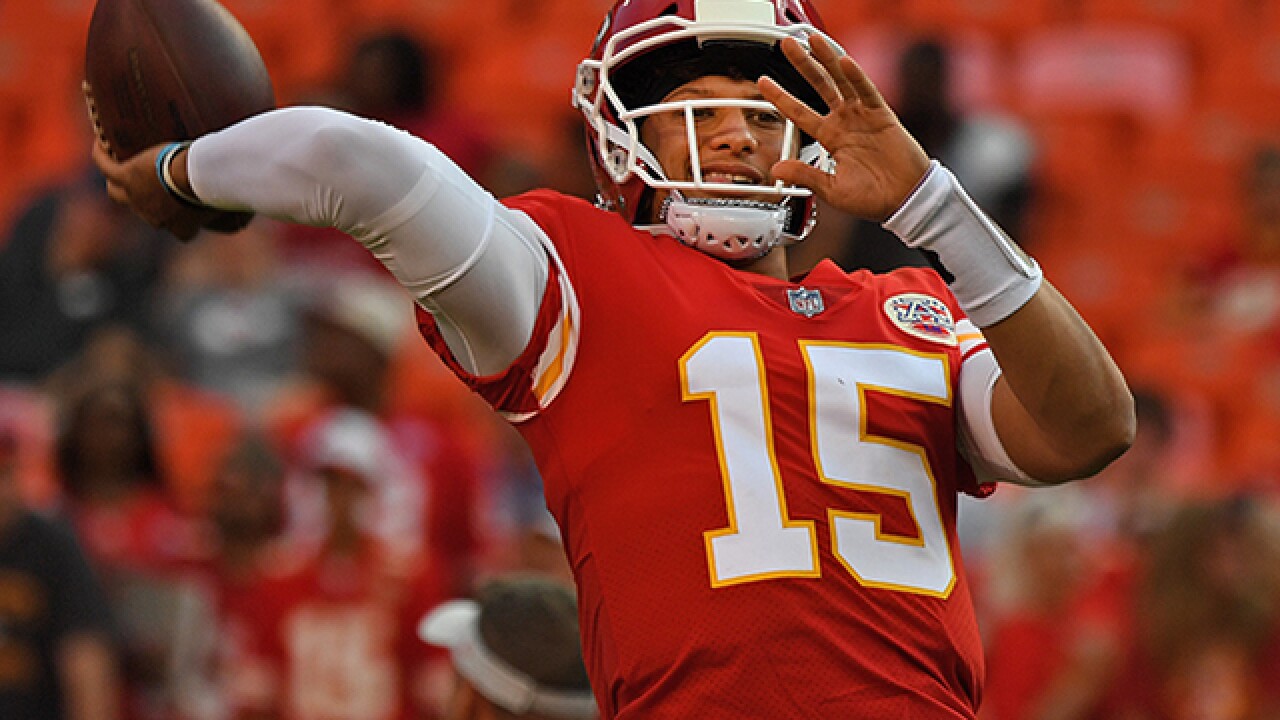 Copyright 2018 Scripps Media, Inc. All rights reserved. This material may not be published, broadcast, rewritten, or redistributed.
Peter Aiken
<p>Kansas City Chiefs quarterback Patrick Mahomes — show here warming up Aug. 9 before a preseason game against the Houston Texans at Arrowhead Stadium in Kansas City, Missouri — had an encouraging performance Friday, Aug. 17, 2018, at the Atlanta Falcons. But it wasn't only because of the long touchdown to Tyreek Hill.</p>

KANSAS CITY, Mo. — Fans are all atwitter about Kansas City Chiefs quarterback Patrick Mahomes’ 69-yard touchdown heave to Tyreek Hill during the Aug. 17 preseason game at the Atlanta Falcons.
It’s not hard to understand why; it was a ridiculous throw.

It’s the kind of throw seldom seen in the NFL, a product of the rare combination of Mahomes’ arm strength and Hill’s speed that enthralled the football world.

Patrick Mahomes TD pass to Tyreek Hill traveled 68.6 yards in the air, longer than any TD thrown in any game in 2017.

But an entirely different throw — a sideline out route to tight end Travis Kelce on third-and-11 late in the first quarter — that brought a smile to Reid’s face Tuesday when he was asked about it.

“Listen, he has a big arm,” Reid said. “… The long ones will come. Those intermediate throws, he starts off 5-for-5. He builds on that. That is important. The possession throws, the short-intermediate throws that kind of keep the chains moving, are important or more so than even the big one.”

Not that the long scoring strike wasn’t incredibly impressive.

It might be easy for a young quarterback like Mahomes to puff his chest after making every conceivable weekend highlight reel and drawing rave reviews about his potential based off that TD bomb, but the former first-round pick is keeping a level head.

He was even a bit critical of the throw when asked how many times he’s watched the play.

“Not as much as I think everyone else has,” Mahomes said. “I underthrew it, to be honest, now that I saw it. Tyreek outran it.”

There was no critique of the throw to Kelce, which netted a critical first down on the first-team offense’s first scoring drive of the preseason.

#SomethingGood This isn't that easy of a throw. We continue to see the trust Mahomes has built up with Travis Kelce. Excellent touch and anticipation on third an long. pic.twitter.com/Mx3M0EZJn4

The throw is even more encouraging because Mahomes sailed a pass on a similar route to the other side a week earlier against the Houston Texans.

“He doesn’t make the same mistake twice normally, and that is a positive thing, especially from a coach’s standpoint,” Reid said of Mahomes. “You saw the throw he made to Kelce last week — same route, and he over shot it a little bit. This one was right there.”

Reid said Mahomes and Kelce spent time working on the timing of the out route last week at practice.

“It paid off for them right there,” Reid said. “Those kind of things, you kind of check off in your head. That is something you keep track of.”

There were, of course, hiccups against the Falcons. Mahomes failed to hold Falcons safety Damontae Kazee on the Chiefs’ next drive and got intercepted trying to connect with wide receiver Sammy Watkins.

“It’s something where I have to see that safety cheating over,” Mahomes said. “He flew over from the beginning of the snap I saw on film. Hopefully, I can learn from that, get my eyes on him, see him. If he does fly over like that work the other side.”

If history is a guide, Mahomes won’t repeat that error against the Chicago Bears as the preseason continues Saturday at Soldier Field.

“It is important that when you see it again, you don’t make the same mistake,” Reid said. “That is where that can be a problem with a quarterback. He is very good at that and he is very good at not doing the same thing twice.”